Two Canadians who were among 30 Greenpeace activists jailed after a protest targeting an oil rig in the Russian Arctic have been granted bail, but they have not yet been released from a St. Petersburg prison.

Greenpeace spokeswoman Jessica Wilson said Alexandre Paul of Montreal and Paul Ruzycki of Port Colborne, Ont., have both been granted bail in the past 24 hours, but neither had been released as of Thursday night local time. Ms. Wilson said she was hopeful the activists – who have been in detention since Sept. 18 – would be released on Friday or on the weekend.

Earlier Thursday, a Greenpeace Twitter account said the 36-year-old Mr. Paul and the 48-year-old Mr. Ruzycki had already been "released." Twenty-six of the 30 activists have now been granted bail, with the other four hearings expected on Friday. Only one activist, 59-year-old Australian national Colin Russell, has been denied bail so far. His detention has been extended until February.

Russian President Vladimir Putin spoke publicly about the case on Thursday, saying he believed the Greenpeace activists had good intentions, but that they had put themselves in the wrong by trying to climb aboard a state-owned oil rig.

"Are they doing something noble? Yes, they are. Did they act rightly when they climbed the platform? No, it was not right," Mr. Putin said in televised comments at a meeting with writers. "Some climbed onto the platform, while others attacked our coastguards, practically storming them with their boats."

Russian media reported that Greenpeace paid bail of two million rubles, or about $63,500 (U.S.) per activist. It was not clear whether those released would be allowed to leave Russia. All 30 still face charges of hooliganism that come with a maximum sentence of seven years in prison, if convicted.

"These are obviously steps in the right direction, but this is far from over," Ms. Wilson said of the decision to grant bail. "They're all still facing ludicrous charges."

The so-called Arctic 30 – 28 activists and two journalists – were detained on Sept. 18 after their ship, the Arctic Sunrise, approached the Prirazlomnaya oil platform in the frigid Pechora Sea. Some of the activists attempted to climb on board, planning to hang an anti-drilling banner. "We're going to try and stop the drilling," a Greenpeace account tweeted at the time.

They were treading on sensitive ground. Priazlomnaya is operated by Gazprom, a mammoth energy company that is controlled by the Kremlin, and the exploitation of the Arctic's natural resources has been declared a national priority by Mr. Putin.

The Arctic Sunrise was towed to Murmansk, the largest city in the Russian Arctic, and the activists were initially charged with piracy – a felony that carries sentences of up to 15 years – in addition to hooliganism. The piracy charges were dropped after an international outcry, and the activists were transferred to St. Petersburg after complaints about the conditions in the Murmansk prison.

The worst of the ordeal now appears to be over for Mr. Paul and Mr. Ruzycki, at least until the trials begin. There is an effort afoot to have the Greenpeace activists included on a list of political prisoners whom Mr. Putin will be asked to amnesty to mark the 20th anniversary of the signing of Russia's post-Soviet constitution on Dec. 12.

"I'm so happy that my son is going to be out of jail soon, and I hope he'll be allowed to come home to us," Mr. Paul's mother, Nicole Paul, said in a statement released by Greenpeace. "I'm so proud of him and everything he stands for."

In Murmansk on Thursday, a court rejected a Greenpeace appeal to release the Arctic Sunrise itself. On Friday, an international tribunal will consider whether Russia violated the United Nations Convention on the Law of the Sea by seizing the Dutch-flagged ship.

Greenpeace defendants back in Russian courts for hearings
May 11, 2018 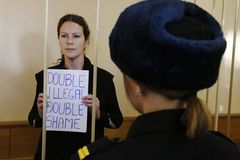