In an unexpected gesture, Egypt's interim president assured the family of an imprisoned Egyptian-Canadian journalist that the man would get a fair, speedy trial and necessary medical treatment while his case was dealt with.

The guarantees came in the form of a letter received by Mohamed Fahmy's family on Sunday – a day before his trial was set to resume in Cairo.

"I want to reaffirm in this regard the independence of the Egyptian judiciary and my confidence that your son will get all his legal rights," wrote President Adly Mansour.

"This will not stop me from exerting every effort necessary and possible to reach a fast resolution to this case, that guarantees justice in line with the law."

The letter was preceded by a hospital visit Fahmy was allowed on Saturday for a badly injured shoulder, a move which itself was triggered by a call three days earlier from the office of the president.

"It's a good indication that there's attention given to the case by the President," Fahmy's brother Adel told The Canadian Press from Cairo.

"There's some sympathy and empathy as well. So it's good."

They are being tried as part of a group of 20 individuals who authorities say worked for the Al Jazeera network and allegedly threatened national security. At least 12 of those charged are being tried in abstentia.

Authorities accuse Al Jazeera of being a platform for ousted Islamist president Mohammed Morsi's supporters and his Muslim Brotherhood group. The network denies that and says the journalists were just doing their jobs.

Fahmy and his two co-workers have pleaded not guilty at their trial, which marks the first time Egypt has prosecuted journalists on terrorism-related charges.

Their case – being heard amidst an extensive crackdown on some secular dissidents and Brotherhood supporters – will be back in a Cairo court on Monday, where Fahmy's family hopes progress will be made.

"It's a matter of convincing the judge that these people are obviously innocent," said Fahmy's brother. "They're objective journalists they have nothing to do with terrorism or terrorist groups."

Monday's session is expected to deal with the contents of equipment seized from the three journalists, which forms a key part of the case, Fahmy's brother said.

Security officials have accused the journalists of having unlicensed equipment and setting up a media centre for the Brotherhood. They're also accused of fabricating footage to show the country in a state of civil strife, harming its reputation.

The court proceeding will come after Fahmy was taken to a civilian hospital under heavy guard this weekend for an MRI and a CT scan on a shoulder he fractured before his arrest.

His family said the injury has grown worse after he was forced to sleep on a hard prison floor and wasn't allowed adequate medical attention for weeks.

The Department of Foreign Affairs has said senior Canadian officials have raised Fahmy's case with Egyptian authorities and have requested a fair and expeditious trial.

Fahmy's family has also noted that while consular staff in Cairo have been "very supportive," officials have indicated that Fahmy's dual citizenship limits how much they can do.

Fahmy's family moved to Canada in 1991. He lived in Montreal and Vancouver for years before eventually moving abroad for work, which included covering stories for the New York Times and CNN.

His parents, who are still based in Montreal, travelled to Cairo days after his arrest and have been there ever since. 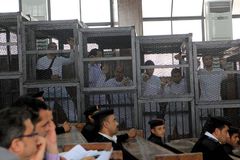 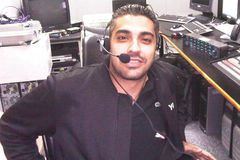 Supporters around the world demand release of Egyptian-Canadian journalist
February 27, 2014