A Canadian-owned company has sold 30 armoured vehicles to Sudan, newly obtained documents show, despite Canadian regulations that ban the export of military and paramilitary equipment to the war-torn country.

Because of Sudan's violent crackdown in Darfur, Canada imposed sanctions more than a decade ago that prohibit Canadian citizens from selling "arms and related material" to anyone in Sudan. Its definition of this material includes "military and paramilitary equipment."

The documents, United Arab Emirates export permits obtained by The Globe and Mail, indicate that the Typhoon armoured trucks were exported to Sudan by Streit Security Vehicles, which is part of Streit Group, owned by Canadian businessman Guerman Goutorov.

The papers show that Streit Security Vehicles exported 30 armoured Typhoon trucks to Sudan in 2012 from its factory in the UAE. The "end user" is listed as the "Sudan Police."

A spokesman for Streit Group would not comment on the Sudan sale. But when asked about a similar sale in South Sudan, the company insisted its vehicles are not military vehicles and are not exported with any form of weaponry.

A Globe investigation over the past 18 months has documented a growing number of examples of Canadian sales of military-related equipment to countries with poor human-rights records, including a $15-billion deal to sell weaponized armoured vehicles to Saudi Arabia.

The Globe reported in April that a United Nations panel accused Streit Group of violating an international arms embargo on Libya in 2012 by selling armoured vehicles to that country without obtaining advance approval from a UN sanctions committee.

In July, The Globe reported that Streit Group sold more than 170 armoured vehicles to South Sudan, where some of the vehicles were used in the brutal civil war there. In the Sudan case, independent researchers interviewed by The Globe and Mail – speaking on condition of anonymity – say the Streit armoured vehicles have been used by Sudanese security forces in Darfur and South Kordofan, two regions where Sudan has been heavily involved in fighting against rebel groups. They say the Typhoon armoured vehicles are equipped with gun mounts and gun ports, making them ready for weapons to be attached.

Alex Neve, secretary-general of the Canadian branch of Amnesty International, said the RCMP should investigate Streit's export to Sudan to see if it breached Canadian or UN sanctions. "It raises troubling questions and it merits a full police investigation," he told The Globe and Mail.

The Canadian sanctions, approved by the federal government in 2004 after the UN introduced similar sanctions, state that: "No person in Canada and no Canadian outside Canada shall knowingly export, sell, supply or ship arms and related material, wherever situated, to any person in Sudan." The only exceptions are for peacekeeping and humanitarian use.

The independent researchers have found photos from a now-closed Facebook page of the Sudan armed forces, showing that the Streit vehicles were deployed in the Sudan military in 2013.

Separate photos show the Streit vehicles in a cargo ship at a port in Yemen in August, 2012, on their way to Port Sudan, the Sudanese city where the vehicles were offloaded.

On its website, Streit describes the Typhoon armoured trucks as mine-resistant and ambush-protected, and "readily configured for a wide range of roles including: Command and Control, Explosive Ordnance Disposal, Patrol, Convoy Support, Forward Observation and Med-Evac."

A report in July by the Small Arms Survey, a group of independent investigators funded by Canada and other governments, describes how Sudan's police received a shipment of armoured vehicles from a manufacturer in a Gulf state in 2012. It said those vehicles were later used in the government's fighting against Darfur rebels in 2013. Sources from outside this research group, speaking on condition of anonymity, have confirmed that this description of the vehicles in Darfur was a reference to the Streit vehicles.

Streit Group, founded by Mr. Goutorov in Ontario in the 1990s, describes itself as the world's leading manufacturer of armoured vehicles.

"Our business has built and supplied more than 30,000 defence and armoured vehicles during its 30-year history, saving hundreds of thousands of lives across the world including Canadian, U.S. and British forces and UN personnel," a company spokesman said in a statement to The Globe and Mail.

"Streit Group operates 12 production facilities across the world. Each business is fully autonomous and a separate legal entity, and all operate in compliance with the laws governing the jurisdictions in which they are based."

The company's business in Canada "mostly serves the North American market and doesn't operate internationally, nor has it ever produced Cougar or Typhoon armoured personnel carriers," it added.

On the question of armoured vehicles exported to South Sudan, the company said the vehicles were sold to "legitimate government agencies" and their warranties would be "invalidated" if any "unapproved modifications" are made after the sale.

"We closely monitor the UN sanctions list and none of these [South Sudan government] agencies appeared on it at the time, or indeed to this day," it said.

"The vehicles supplied were all APCs [armoured personnel carriers]. They were designed and built to protect people – they are not tactical military vehicles and none of our vehicles are ever shipped with any form of weaponry."

Mr. Neve, from Amnesty International, said the question of whether the vehicles were shipped "fully loaded" is not the key issue, especially if the manufacturer knew that they would probably be used in fighting. He noted that Sudan is "a country in almost constant turmoil" with armed conflicts in several regions. "A company can't just shrug its shoulders and turn a blind eye to the likelihood that its exports will be used for military purposes," he said.

The Canadian government has regulations to control the export of military equipment, but it has argued that it only regulates exports that originate in Canada, not in overseas factories.

This is a loophole that allows Canadian companies to "get around" the regulations by setting up foreign factories, Mr. Neve said. He said Canada should tighten its regulations and eliminate this loophole as it prepares to accede to the Arms Trade Treaty, a global treaty that controls the export of arms.

Canada announced in June that it will officially join the Arms Trade Treaty by 2017. 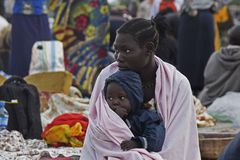