Physicists around the world celebrated on Wednesday after researchers at the Large Hadron Collider in Geneva announced that they believed they had found the long-sought Higgs boson, the final piece of the so-called Standard Model of particle physics.

For nearly 15 years, Robert Orr, a physicist at the University of Toronto, served as the principal investigator for the Canadian team working on ATLAS, one of two detectors at the LHC that finally snared the elusive particle this week.

He explains why the Higgs matters.

How much particle physics does an ordinary non-scientist need to understand?

I think it's extremely important for people to understand what we do, for two reasons.

First, the selfish reason: Unless people know what we're doing, and find it interesting, eventually they won't fund it – because it costs a lot of money.

In total, the LHC has cost $30-billion to $40-billion. In a democracy, people have to know what their money is being spent on. And they should think it was money well spent.

But also, this understanding of reality is an immensely important part of our culture. It's our scientific view of the world.

Can you explain in layman's terms what the Higgs boson is?

Our theory says that matter, at a fundamental level, is made up of particles called quarks and leptons. The quarks make up protons, and protons make up atoms.

Mathematically, it's easy to build a theory where the quarks have no mass at all, and in fact they may have been mass-less at the time of the Big Bang, when they came into existence.

But clearly they do have mass now. Why?

In the 1960s, Peter Higgs [a British physicist] and others found a kind of mathematical trick to explain it. We now imagine there is a field permeating all of space – we call it the Higgs field – and as particles interact with that field, they acquire mass.

Think of it like a syrup that the particles have to push their way through.

So it's that interaction with the syrup that we see as mass. And the Higgs boson is the "unit" that makes up this Higgs field.

We thought maybe it would have been within reach of the accelerators that we had back then (in the 1970s and 1980s). We had an accelerator that produced 10 giga-electron-volts, roughly equivalent to 10 times the mass of a proton. And we could have seen the Higgs if its mass had been that small. But it turns out the Higgs's mass is about 125 times that of the proton.

So the reason it took 50 years is that you have to have a big enough accelerator to produce that much energy, to create the particle, through Einstein's equation, E=mc 2 .

What impact will the discovery have on other branches of science?

It's very important for cosmology. One puzzle has been, why is space so "smooth"?

The usual answer is that, when the universe came into existence at the moment of the Big Bang, it went through a period of very rapid, exponential growth known as "inflation."

But what caused inflation?

We know it wasn't the Higgs field itself, for technical reasons – but there could be other fields, similar to the Higgs field, which "blew up" the universe.

Was it a mistake for physicist Leon Lederman to call the Higgs boson "the God particle" (in his 1993 book with that title)?

Leon Lederman is a charming and amusing guy. I know him. He's always making jokes.

I have no idea why that book was called The God Particle. Many physicists think it was a terrible name.

I don't mind it myself: If it wasn't for the Higgs, we'd have a universe without any matter – no stars, no planets, no people. Because of the Higgs boson, all of this reality that we see around us is called into being.

So if you want to call it the God particle, that's okay by me.

Will any of this lead to a faster computer or a better smartphone?

Not in the short term. We figured out the connection between electricity and magnetism in the 1860s – that was the work of James Clerk Maxwell. That's what our modern world is based on, all our computers, telephones and iPads.

But it took 150 years for that discovery in theoretical physics to come to fruition in the everyday world. So it could easily take a couple of hundred years before our understanding of the Higgs field has practical implications.

We need to study this particle in detail, to see exactly what it is. That will take five to 10 years. If any of its properties are different from what we expected, then maybe it's not the Higgs boson after all. And what else is out there? Are there higher-mass particles?

The LHC is running at half its design energy at the moment; its energy will double in 2014, and we may see entirely new phenomena.

If an idea called supersymmetry is right, there may be heavy supersymmetric particles, hiding alongside the normal particles that make up ordinary matter. These heavy particles could explain the mystery of the so-called "dark matter," thought to make up about 85 per cent of the matter in the universe.

At the LHC, we should be able to make these supersymmetric particles, and watch them decay. Then we could actually make dark matter in the laboratory, and investigate its properties.

Is it possible that physics, or at least this kind of physics, will simply become too expensive to pursue?

Yes, there is that possibility. But we're always finding new ways of accelerating particles. I believe that in 10 or 20 years we'll be able to reach the energies we have with the LHC much more cheaply. So I think human ingenuity will allow us to continue to investigate higher and higher mass regions, using higher energies, into the foreseeable future.

That's very optimistic. Many people would say I'm wrong. But that's my opinion.

Do you get to take a holiday now?

I've just started my sabbatical, actually. But I'm going to spend part of it at Fermilab, working on new acceleration techniques. 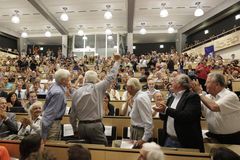