The hardest working member on Pope Francis's tour of Cuba and the United States, other than the Pope himself, might be an unassuming Canadian priest who has quietly emerged as one of the Vatican's most effective communications gurus.

Rev. Thomas Rosica, chief executive of Toronto's Salt + Light Media, a Catholic TV and web service, is the grand tour's English-language media attaché, and predawn to midnight a whirlwind, surviving on only five hours' sleep. He pumps out detailed daily reports on the Pope's itinerary, puts the Pope's comments into historical and cultural context, interprets for the English speakers, is the go-to man for a million Pope-related questions, and sums it all up for American TV viewers on CNN, CBS and other networks.

"My big job is working with the secular journalists," Father Rosica said in a phone interview Thursday evening from his hotel in Manhattan's Times Square. "I've never seen such genuine interest. I get asked everything from what the Pope eats to why he seems to have an obsession with the devil."

The English-language media on the tour considers him, well, a godsend. "I've been covering the Vatican since John Paul II got sick and having a press attaché like Father Rosica lends a sort of transparency that was unthinkable before," says Barbie Latza Nadeau, Rome bureau chief for The Daily Beast and a CNN contributor who was on the Cuba leg of the Pope's tour.

"The Vatican has always been an Italian institution, and having someone like Father Rosica provides shelter from the storm."

Father Rosica is a professor of scripture by training, but has always been media savvy, a skill not lost the Holy See press office in Rome. On and off for years, he has been hauled in to deal with the foreign press.

Today, it is automatically assumed he will be front and centre on the Holy See media team when a big Vatican event is under way. His knowledge of French, Spanish, German, Hebrew and Arabic, as well as Italian, has made him all the more indispensable, though he is used mostly for access to the English-language media, which is to say the international media.

"English is so important," Father Rosica says. "The church is beginning to realize that it has to be more than Italian."

Father Rosica is an accidental Canadian. He was born in Rochester, N.Y., and lived there through his university undergraduate years. In Rochester, he was taught by a couple of priests from the Basilian order (the Congregation of St. Basil), which had a deep presence in Canada.

Attracted to the simplicity of the Basilians, he joined their order and was sent to graduate school at Regis College at the Toronto School of Theology, where he studied theology and sacred scripture.

He was ordained as a Basilian priest in 1986 and went on to study in Rome and Jerusalem. "I've been gone from the States since 1980, and I feel very much Canadian," he says, though he maintains dual nationality.

His career breakthrough came in 1999, when the Canadian bishops appointed him chief executive of World Youth Day and the papal visit of Pope John Paul II, which took place in Toronto in 2002.

The event was a hit and the Canadian caught the attention of both Rev. Federico Lombardi, the Vatican TV director who would later become head of the Holy See press office, and St. Joseph's Communications, owner of Toronto Life magazine, which offered to make him the founding CEO of Salt + Light Media.

St. Joseph's put $15-million into Salt + Light, which is independent and carries charity status, to get it going. The service provides live coverage of Catholic events, makes documentaries and does one-on-one interviews with big names in the Catholic world, one of whom was Stephen Colbert, host of The Late Show on CBS, who was billed as "America's most famous Catholic."

Father Rosica has been the Vatican's hit man for the English-language media since 2008, when he worked for the Synod of Bishops. During the papal conclave after Pope Benedict XVI's resignation in 2013, which would thrust Argentine cardinal Jorge Mario Bergoglio, later the Pope Francis, onto the world stage, he worked tirelessly around the clock for weeks.

That's when he started publishing his daily notes, which now go out to more than a 1,000 journalists and Catholic communicators around the world.

"I haven't missed a day since Pope Benedict resigned," he says. "I treat it as a personal discipline. I know it helps journalists and that's what Francis wants."

Father Rosica says he has found the Pope's Cuban and U.S. tour thrilling, and not just because he has found himself at the centre of a media circus. A priest first, media attaché second, he has loved seeing Francis in action.

"This has been an incredible experience," he says. "I've never seen some of the things I am seeing now. The whole world is here. Everyone loves the Pope. He's authentic. He's leading the people to Jesus Christ. Francis is truly sent to the world from God."

- Rev. Thomas Rosica was born in 1959 in Rochester, N.Y. After studying Italian and French language and literature at St. John Fisher College in his hometown, he pursued theological studies around the world: first in Toronto, then in Rome and Jerusalem.

- Though he finished his formal education in 1994, he has maintained links with the academic world, first as a lecturer at various Ontario universities, then as president and vice-chancellor of Windsor's Assumption University for three-and-a-half years. This spring, Gannon University in Erie, Pa., awarded him an honorary doctorate. He sits on the board of several universities.

- Pope John Paul II and about 800,000 of his biggest (and youngest) fans swarmed Toronto in 2002 when the city hosted World Youth Day, a multi-day religious event for Roman Catholics. The man mostly responsible for pulling off the event was Father Rosica, who won the gig as national director after an interview with a panel of Catholic bishops.

- Canada's first Catholic TV network – Salt + Light Media – launched in 2003 with Father Rosica at its helm. From its downtown Toronto studio, it runs programming in English, French, Chinese and Italian, with Father Rosica as one of its prominent on-air hosts. His musings on religion ran in a weekly column with the Toronto Sun for three years, and were also published in his first book, Word Made Flesh.

- Father Rosica first became a mouthpiece for the Vatican in 2008, when he was appointed to handle English media related to the Synod of Bishops. The Vatican then tapped him to manage communications between the time Pope Benedict XVI resigned and Pope Francis was elected as his replacement. After Pope Francis had settled into his new role, Father Rosica became a spokesperson for the Holy See press office, bringing the Pope's message to the English-speaking world. 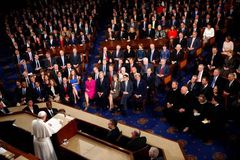 Pope’s message of action on climate and refugees may discomfit Republicans
September 24, 2015 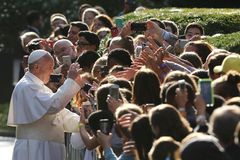