A young Montreal woman is in a South African hospital after she was clawed and bitten by two lions on Monday at a wildlife rehabilitation centre.

Lauren Fagen, 18, says she was kissing the fur of a male lion named Duma when he reached through the bars and dragged her legs into his cage. The lion's female mate also joined the attack, biting her feet.

She suffered about 10 flesh wounds to her legs and feet, requiring stitches and other medical treatment, and admits she is lucky to have survived. She hopes to be released from hospital next week but will need a further two weeks of recovery.

Ms. Fagen had been volunteering at the Moholoholo Wildlife Rehabilitation Centre since June 16, cleaning the lion cages and feeding animals such as baby rhinos and a honey badger. She said she felt a "deep connection" to wild animals, especially big cats, and wanted to explore her "passion" before entering McGill University in September.

She said she was cleaning a lion feeding cage on Monday when the attack happened. Duma, a five-year-old lion that had been raised at the wildlife centre since he was an orphan cub, was rubbing against the bars from an adjoining cage and was being "very, very friendly" when the incident began, she said.

"I didn't realize he could stick his paws through. I should have died or lost a leg. It was a miracle that I survived. He could have ripped off my skin and I would have died of blood loss."

A photo published in a South African newspaper on Wednesday showed her in a hospital bed with both of her legs covered in bandages. Some of the wounds were "huge rips" and holes from fang marks and claws, she said.

When the lion attacked, she screamed for help. "It didn't feel real," she said. She said her knee was trapped in the cage until several other student volunteers came to her rescue, beating back the lion with a broom.

"She'll have some scarring on her legs, but there won't be any permanent damage," said Marisa Reinach, a manager of the wildlife centre.

Brian Jones, the centre's founder, said the volunteers are always warned about the risk of attack by the animals. He blamed Ms. Fagen for the incident. "This is quite mild – it's a miracle it wasn't worse," he said. "She came here telling people that she wanted to hug an animal."

Although this was the first lion attack at the centre, there have been many lion attacks in South Africa and neighbouring Zimbabwe over the years, Mr. Jones noted.

Ms. Fagen said she doesn't regret her decision to volunteer at the centre. She had signed a waiver acknowledging the risks. "I knew I was risking my life, but it's a risk we take to go there and take care of the animals."

Although she acknowledged that she shared blame for the attack, she said the centre should have informed the volunteers that the lions could reach through the cage fence.

The Moholoholo centre, established in 1991 in the Limpopo province of South Africa, has a popular volunteer program for students to work temporarily at the centre.

The centre takes in injured or poisoned animals, which cannot be released back into the wild, and uses them as "ambassadors" for their species.

"Members of the public are therefore able to get an 'up close and personal' experience of these incredible creatures," the centre says on its website.

The centre receives an average of about 1,000 school children and adult visitors on guided tours every month, the website says. 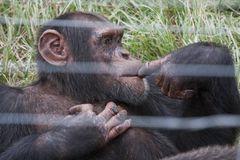