The yellow-walled barracks of this former Soviet military camp amid the forests of western Ukraine have seen a lot of history. On Monday, they witnessed what was surely a new twist: a fancy-footed Ukrainian military band, accompanied by twirling dancers in traditional dress, welcoming soldiers of the Royal Canadian Regiment.

The jazzy reception was a slightly surreal beginning to Operation Unifier, the Canadian military's mission to help train Ukrainian army units for war against the Russian-backed separatists who control swaths of eastern Ukraine. Both the Ukrainian government and the North Atlantic Treaty Organization allege that regular Russian forces have at times fought alongside the rebels, giving them a decided edge in combat.

Moscow denies direct involvement in eastern Ukraine, saying Russian citizens captured and killed in the fighting were there as "volunteers."

The Canadian training mission is taking place 1,200 kilometres away from the front lines, but the Kremlin nonetheless sees the exercises as part of a NATO buildup on its doorstep. The Russian embassy in Ottawa has criticized the mission as "counterproductive and deplorable."

Operation Unifier, which is expected to cost $32-million over the two-year deployment, is less controversial in Canada, with all three main political parties supporting the effort in principle. The deployment comes in addition to about $570-million in economic and non-lethal military aid – equipment such as uniforms and night-vision goggles – that Canada has provided to Ukraine in the 18 months since a pro-Western revolution in Kiev, which was followed by Russia's annexation of the Crimean Peninsula and the outbreak of fighting in the eastern regions of Donetsk and Lugansk.

Ottawa has also levied sanctions against businesses and individuals linked to the Kremlin as punishment for Moscow's actions in Ukraine.

The setting for Operation Unifier adds to the mission's Cold War feel. For five decades, the Red Army used what was then known as the Lviv Training Centre to rehearse for war with NATO forces on the other side of the Iron Curtain. Yavoriv, a short drive from the Polish border, was where the Soviet Union ended and the rest of Eastern Europe began. Soviet soldiers stationed near here were sent to crush the Hungarian uprising in 1956.

Today, there are U.S. soldiers conducting live fire exercises alongside Ukrainian units at the renamed Yavoriv Peacekeeping Centre. A contingent of British soldiers recently left after completing their training mission. The Ukrainian soldiers emerge from the crash courses with their guns pointed east rather than west.

The 200 Canadians from the 1st Battalion of the Petawawa, Ont.-based Royal Canadian Regiment who formally began their mission on Monday, will initially work with the 30th Mechanized Brigade of the Ukrainian army teaching tactics, marksmanship and combat medicine, as well as how to deal with improvised explosive devices.

The 30th Mechanized Brigade is a battered unit, one that took heavy losses in the failed defence of the city of Ilovaysk last year and the strategic rail hub of Debaltseve this spring. Both cities eventually fell into the hands of pro-Russian forces. Some of the unit is now made up of raw recruits called up to replace those killed and wounded in action.

While the Ukrainian army is a much more professional and battle-hardened entity than it was 18 months ago, Colonel Igor Slisarchuk, the commanding officer of the 30th Mechanized Brigade, said there is still plenty the Ukrainians could learn from the Canadians.

The soldiers of the Royal Canadian Regiment arrive with combat experience of their own. About two-thirds of those deployed to Yavoriv are veterans of the war in Afghanistan.

"We greatly value the professionalism and experience of the Canadians in Afghanistan," Col. Slisarchuk said before the flamboyant welcoming parade. "It will be a great assistance to our military. It will give our country the opportunity to defend the principles of democracy and freedom."

"I've been asked that question many times. 'How does Afghanistan relate to [eastern Ukraine]?' " said Lieutenant-Colonel Jason Guiney, the commander of the Canadian troops in Yavoriv. "There's that knowledge of actually knowing what it's like to be on what we call the two-way range, not just outgoing but incoming [fire]. Our medics have actually done tourniquets. They've done casualty evacuation. They know and have experienced the horrors of war and that adrenalin rush."

The Canadian troops will get down to business Tuesday, first by familiarizing themselves with the Soviet-era equipment the Ukrainian army uses. Col. Guiney gushed about the opportunity to train at a former Soviet base and use different weapons systems.

Col. Guiney said the Canadians would also take advantage of the opportunity to learn from the Ukrainians about the so-called hybrid warfare – a mixture of covert and classic military tactics – employed by the pro-Russian forces in eastern Ukraine.

Fighting in Donetsk and Lugansk has slowed in recent days, giving rise to hopes that a ceasefire negotiated seven months ago, but only sporadically abided to since then, may be taking firmer hold. However, the Ukrainian military reported that two of its soldiers were killed, and another one had gone missing, during renewed clashes on Monday.

Almost 8,000 people have died since fighting began in eastern Ukraine in the spring of 2014. 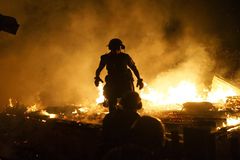