Three NATO warships – including a Canadian frigate – are being deployed to the eastern Aegean Sea as part of a new effort to break what Defence Minister Harjit Sajjan called the "criminal rings" of human smugglers charging refugees thousands of dollars for the dangerous sea voyage to Europe.

The mission was approved at the end of a NATO defence ministers' summit in Brussels on Thursday, following a joint request from member states Germany, Greece and Turkey. NATO Secretary-General Jens Stoltenberg said the warships would begin their new task "immediately."

The effort comes as record levels of refugees, many of them fleeing the wars in Syria, Iraq and Afghanistan, continue to make the sea trip from Turkey to Greece even in the frigid first six weeks of 2016. Europe, which received more than a million newcomers in 2015, is now bracing for an even greater influx this year.

The three-ship force will not seek to directly intercept the human smugglers – or the flotilla of overcrowded rubber dinghies they send daily from Turkey to Greece – but will monitor activity between the Turkish coast and the outlying islands of Greece, collecting information on the smugglers that will then be shared with the Turkish and Greek coast guards.

"What we're providing is that higher-level reconnaissance and surveillance to make their jobs far more effective, which is being able to figure out the patterns, from the criminality side," Mr. Sajjan said in an interview.

"We can't forget how many people are killed along the way on those rubber rafts, or whatever, that they're going to be coming on. People are so desperate to get out, [that they are] paying money to get on these things even though they're putting their family's life at risk."

Mr. Sajjan said the Fredericton and its crew would take direct action if they came across a boat of refugees in jeopardy. "If, by chance, there is a need, HMCS Fredericton and all of our resources from the navy, our search and rescue, always has the inherent ability to assist, and the need to assist."

That would be a last resort, however. Mr. Sajjan said that in most cases, the Fredericton and the other NATO warships would first call on any Greek or Turkish vessels in range to respond to an emergency situation.

Upward of 65,000 people made the crossing to Greece in January alone, more than 10 times last year's total of 5,550 for the same month. Human smugglers in Turkey charge the refugees as much as $1,000 (U.S.) a person for the journey, with the price rising even higher in summer months.

The three-ship force also includes a Turkish frigate, the Barbaros, and the group's flagship, the German supply ship Bonn. The three ships were on duty together as NATO Standing Maritime Group Two, and were already in the eastern Mediterranean Sea as part of an effort to bolster the alliance's eastern flank against possible Russian aggression.

While the outlines of the mission were still being finalized Thursday, Mr. Sajjan said normal rules of engagement would likely apply to the anti-smuggling operation, meaning that the Fredericton and the other ships can return fire if fired upon.

While Europe is keen to see the flow of refugees and other migrants reduced, Mr. Stoltenberg said the alliance's warships would not be "stopping or pushing back refugee boats." He said the goal would be to help Turkey and Greece "manage a human tragedy in a better way than we have managed to do so far."

Mr. Sajjan said he saw the NATO effort as a humanitarian one.

"This is about making sure that … the organized crime that's pushing this to happen is being curbed, and preventing the loss of human life," he said. "We want to be able to not have those horrible images that we've seen of young children who are washing up on beaches. It's a responsible thing to do, and I'm very happy to see that NATO is supporting this."

The meeting of NATO defence minsters was followed Thursday by a summit of the countries participating in the U.S.-led coalition against the so-called Islamic State.

Ahead of the meeting – to which 49 countries were invited – U.S. Defence Secretary Ashton Carter signalled that he would ask allies to contribute more to the fight, which he said the United States was in a "hurry" to win.

While Canada announced this week that it would withdraw its six CF-18 fighter jets from air strikes, Mr. Carter has praised the Liberal government's plan to replace that contribution with increased military training of Kurdish peshmerga fighters, as well as more development aid to the region. On Thursday, Mr. Stoltenberg said Canada was still an important partner in the fight against the so-called Islamic State, which is also known as ISIS and ISIL. 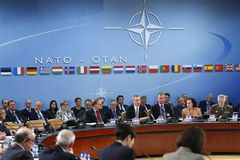 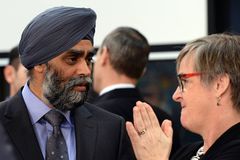 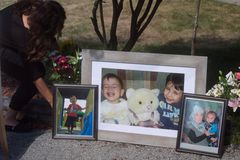