And so it's no surprise that a planned L.A. highway closing this weekend is being compared to the cinematic disasters produced by Transformers director Michael Bay and billed as an "end of days" scenario - and that's just city officials talking.

At midnight on Friday, a 16-kilometre northbound section of the city's 405 freeway will be closed completely until 6 a.m. Monday. The section of roadway carries more than 300,000 cars per day in the infamously gridlocked city, and the 54-hour shutdown is expected to produce backups that stretch up to 100 kilometres and create chaos on alternative routes.

"It will be an absolute nightmare," Mayor Antonio Villaraigosa has said of the event.

Dubbed "carmageddon," the closing has sparked an unprecedented PR campaign by city officials desperate to keep people off the roads throughout the weekend, and produced a cottage industry of mobile applications, hotel deals and T-shirt slogans tied to the traffic event.

"Right now we're on the eve of destruction," he said. "I'm sure there will be multiple journal articles in my field coming out afterward about what happened."

The section of the 405 is being closed as part of a $1-billion (U.S.) project to expand the highway, allowing it to carry even more commuters. It's a glimpse into the future for other urban centres choosing between promoting transit and building up their road networks.

Mr. Pietrucha said the 405 is a significant link in the interstate highway network around Los Angeles, without adequate parallel routes to absorb the diverted traffic.

But while it will be a hard few days for people on the roads, carmageddon will provide invaluable information to L.A. officials about emergency preparedness.

"It's going to give them a window into what could be happening in other situations like that when you lose a major transport link, whether it's a natural or man-made disaster," he said. "If they ever have to evacuate people, this is going to show them the way."

He compared the event to disasters that have knocked out transportation routes in major cities.

The terrorist attacks of Sept. 11, 2001, took out the busiest transit station in lower Manhattan, at the World Trade Center, he noted, and the 1989 earthquake in San Francisco destroyed a section of the Bay Bridge and the MacArthur Freeway.

"They had to cope with that not for a weekend, but for months afterward," he said.

Already, emergency services in Los Angeles are bracing for the tense and unusual scenario.

Two hundred additional firefighters will be working each day, with 90 rescue ambulances stationed along north and south ends of the closed road section.

Emergency medical technicians will be dispatched on motorcycles to allow them to quickly reach those in need, and the fire department also plans to use helicopters if necessary.

The UCLA medical centre has encouraged pregnant women to book hotel rooms nearby, while hundreds of hospital employees will spend the weekend in campus residence halls.

Within the city and around the world, traffic watchers are asking how the city could have invited such a scenario. But Tom Vanderbilt, the author of Traffic: Why We Drive The Way We Do, said the extended closing makes sense.

Writing on his blog, Mr. Vanderbilt explained that alternative plans would also have come at a steep cost. Nocturnal work crews have been found to add six per cent to the base price of a construction project, he said, and research by the Federal Highway Administration has found that closing highways results in projects being completed 64 to 95 per cent faster than those that maintain some traffic.

But cities need a comprehensive plan to ensure such road closings run smoothly, he said, and that includes building up a significant level of dread among drivers.

"Implicit in this is to issue a prediction of Nostradamusian direness," he said. "To do for weekend driving what Jaws did for ocean swimming."

Capitalists cash in on car-tastrophe

It seems even traffic jams bring out the capitalist spirit in American cities. A collection of carmageddon capitalists are cashing in on the car-tastrophe, offering special deals tied to the highway closing or trying to find a way to get ahead, even in bumper to bumper delays:

- "It's the perfect time to get a tattoo. You can say, 'I got a tattoo the weekend they closed the 405.' It'll make it more special," Howard Teman told the L.A. Times. Mr. Teman owns T-Man Tattoo on Ventura Boulevard, and is offering 15 per cent off "any piercing or tattoo."

- JetBlue Airways Corp. announced a "Fly Over the 405" one-way flight from Burbank to Long Beach, 65 kilometres - for $4, taxes and fees included. The 20-minute flights sold out in three hours.

- A 15-minute trip from the Van Nuys Airport to the Los Angeles International Airport or Santa Monica Airport aboard the same type of helicopter used by William and Catherine, the Duke and Duchess of Cambridge, costs just $150. The luxury copters feature Italian leather seats and soundproof interiors.

- Pacific Park, an amusement park on the Santa Monica Pier, is offering free rides to anyone with a San Fernando Valley zip code, and cotton candy in "Caltrans [California Department of Transportation]Orange."

- The Los Angeles Police Department asked celebrities to tweet warnings about the closing, part of an advertising barrage on local media. The actor Ashton Kutcher, who has more than a million followers on Twitter, complied - with his own demand. "LAPD askd me 2tweet: 405fwy btwn 10 & 101 will b closed July16-17. In xchange I would like a free pass on that stoplight tickt IT WAS YELLOW." (Source: wires) 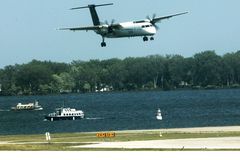