The video clip is chilling to anyone who watches it. Two of Russia's most prominent opposition figures, Mikhail Kasyanov and Vladimir Kara-Murza, filmed through what appears to be the scope of a sniper's rifle as they chat on a street corner.

Particularly unsettling are the timing of the video – published just weeks before the anniversary of opposition leader Boris Nemtsov's murder in the centre of Moscow – and its provenance. It was posted Sunday on the Instagram account of Chechen leader Ramzan Kadyrov, someone frequently accused of using violence to settle scores.

A man who served in Mr. Kadyrov's private militia is one of two people charged in the Nemtsov murder. Mr. Kadyrov has praised the accused gunman as a hero.

Many in Russia's beleaguered opposition consider the new video a very direct threat to kill Mr. Kasyanov and Mr. Kara-Murza. Vygaudas Usackas, the European Union's ambassador to Moscow, said on Tuesday the video was "unacceptable in a democratic state."

Both Mr. Kasyanov, a former prime minister of Russia who fell out with President Vladimir Putin a decade ago, and Mr. Kara-Murza, a well-known journalist and opposition activist, are named on multiple websites – which some see as akin to hit lists – as "enemies of Russia." Mr. Kara-Murza fell into a weeklong coma last spring in what many Putin opponents believe was a poisoning.

The Instagram clip showed Mr. Kasyanov and Mr. Kara-Murza in the French city of Strasbourg, speaking with a woman who has not been identified. In his Instagram post – which was deleted by the website after receiving more than 16,000 "likes" – Mr. Kadyrov accuses the two men of travelling to Strasbourg to seek funding for Russia's opposition. "THOSE WHO DO NOT UNDERSTAND, WILL UNDERSTAND!" he adds ominously, using all capital letters.

Bill Browder, a London-based investment banker and prominent Putin critic, told The Globe and Mail that he was in Strasbourg in late January, and met there with Mr. Kasyanov and Mr. Kara-Murza, as well as Mr. Nemtsov's daughter, Zhanna.

He said the four had been lobbying the Strasbourg-based Council of Europe to appoint a special rapporteur to investigate Mr. Nemtsov's murder. Mr. Nemtsov, a deputy prime minister while Boris Yeltsin was president of Russia in the late 1990s, was shot dead as he walked over a bridge near the Kremlin walls on Feb. 27, 2015.

Allies of Mr. Nemtsov say they plan to march to the bridge on the coming anniversary to protest the official silence over his murder. Petitions to rename it "Nemtsov Bridge" – or just mark the spot where he was killed with a small plaque – have been rejected by Moscow city authorities.

Mr. Browder will be in Canada later this month to lobby Parliament to introduce sanctions against individuals suspected of involvement in the murders of both Mr. Nemtsov and Sergei Magnitsky, a lawyer for Mr. Browder's Hermitage Capital fund who died in Russian custody in 2009.

"Nothing surprises me coming out of Russia any more," Mr. Browder said of the video. "I've been on a hit list ever since I started to expose corruption in Russia. I don't think the video changes the stakes in any way."

He said the murder of Mr. Nemtsov was intended to silence Russia's opposition, which briefly threatened Mr. Putin's rule in late 2011 and early 2012 with a series of mass protests motivated by accusations of electoral fraud.

Parliamentary elections – the first since those protests – are scheduled for September, but Mr. Browder said the opposition is too intimidated to challenge Mr. Putin again. "The crackdown is complete. There are still a few struggling opposition politicians, but they're not going to struggle too hard because nobody wants to die."

Speaking in the London office of Hermitage Capital, Mr. Browder said the murders of Mr. Nemtsov and Mr. Magnitsky could not have happened without at least Mr. Putin's tacit approval.

Mr. Kasyanov, who co-founded the RPR-PARNAS political party with Mr. Nemtsov, is among those who continue to struggle. He wrote on his Facebook page that he considered Mr. Kadyrov's video "a direct murder threat" and said he planned to file a legal complaint.

"It is important to emphasize that Kadyrov is the head of one of the entities of the Russian Federation, and was personally appointed to this post by Putin," Mr. Kasyanov wrote. "Putin is personally liable for the actions of Kadyrov."

Mr. Kadyrov, however, was unrepentant. In subsequent posts, he compared Russia's opposition leaders to the Nazis who blockaded Leningrad during the Second World War and complained that Instagram had deleted his video.

Mr. Kadyrov, who is prized by Mr. Putin as the man who brought order to long-restive Chechnya, said last month that Russia's opposition leaders were working for "Western special services" and should be put on trial for treason (Mr. Kasyanov has called for expanded Western sanctions against Mr. Putin's inner circle).

Kremlin spokesman Dmitry Peskov avoided comment on the video. "We are not following Kadyrov on Instagram," he said.

Putin ‘politically’ to blame for her father’s death, Nemtsov’s daughter says
May 12, 2018 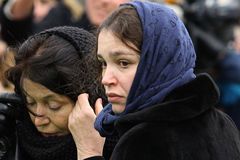