A billionaire media baron pledged to join pro-democracy protests after Beijing offered Hong Kong a form of election that requires patriotic candidates and gives China significant influence in who leads the financial centre.

For months, protesters have threatened to shut down Hong Kong if Beijing did not provide the right to openly nominate and vote for the territory's powerful chief executive position.

On Sunday, Chinese authorities offered a broad rejection of those pleas, allowing only a form of partially open election — derided by critics as a "bird-cage democracy" — that maintains a secretive system where candidates are nominated by a 1,200-person committee. Those candidates must, the National People's Congress said Sunday, bear allegiance to China.

"The chief executive shall be a person who loves the country and loves Hong Kong," the decision text says.

"If the chief executive does not love the country and confronts Beijing, 'one country, two systems' would fail," Li Fei, chairman of the Basic Law Committee that oversees Hong Kong, said in Beijing Sunday. He called it "a legal, fair and reasonable decision."

The Chinese decision limits the number of potential Hong Kong chief executive candidates to two or three, each with support from 50 per cent of the secretive committee. Those restrictions allow Beijing significant sway in who can be chosen to lead Hong Kong in the next election, scheduled for 2017.

China called the new system "universal suffrage," but that description was scoffed at by critics who on Sunday raised signs in Hong Kong saying "kangming," or "disobey orders."

"Today is the darkest day in Hong Kong since July 1, 1997 when its sovereignty was handed from U.K. to Beijing," wrote Rose Tang, a New York-based Chinese democracy advocate who was among the students at the Tiananmen Square massacre in 1989.

Jimmy Lai, the billionaire owner of a series of media properties often critical of Beijing, on Sunday pledged to join "Occupy Central" protests that have pledged to create havoc by shutting down a key part of downtown Hong Kong.

"I will participate in Occupy Central, lie on the street together and go to jail together" with the 2,500 others who have signed commitment letters to protest, he said in an interview with Radio Television Hong Kong.

His presence may reinvigorate a movement that had grown dispirited in its lack of success in achieving any concessions from China. A small protest in Hong Kong was planned for Sunday night. Observers said its turnout would offer a preview of the weeks ahead: a large crowd could galvanize a series of energetic protests; a small crowd could suggest grudging acceptance of Beijing's guidelines.

Under heavy rain and thunder, those who came to the protest heard Benny Tai, one of the founders of the Occupy movement, declare the start to an "era of civil disobedience," the South China Morning Post reported. Student leaders also said they would begin to plan strikes at local high schools.

The constrained form of democracy prescribed by Beijing, which must still pass through the Hong Kong legislative system, is a step forward of sorts from what both British and Chinese authorities used for more than a century. Under that system, Hong Kong citizens had no opportunity to directly vote for a chief executive.

"In 150 years, the Brits never did anything. And now, 17 years [of Chinese rule], we are getting something. So I think it's a big improvement," said Robert Chow, who has led the Silent Majority group that has supported Beijing, and derided the Occupy movement's calls for protests.

He suggested what Beijing wants for Hong Kong is "quite acceptable … even by international standards." Few elections in the U.S., UK, Japan or Canada have more than "a two-horse, or at most a three-horse race. So the end result [in Hong Kong] is the same. What's wrong with that?"

Critics and outside observers, however, described the new system as placing Beijing in direct control over Hong Kong's most important political position. China's state-run People's Daily newspaper on Saturday equated Hong Kong's chief executive to "a regional head in the People's Republic of China," a statement that suggests China, to an increasing degree, does not see Hong Kong as occupying a special position.

Russell Leigh Moses, the dean of academics and faculty at The Beijing Center for Chinese Studies, called the Sunday decision "a reversion to the hardline status quo" by Beijing.

"I think their expectation is that they can postpone addressing the details of the Hong Kong situation at some other point."

That point may be after president Xi Jinping leaves office. Mr. Xi "clearly takes the view that he is in charge, the party is in charge, nobody else is allowed to challenge that — whether they are in China or outside China," said Steve Tsang, director of the China Policy Institute at the University of Nottingham.

Still, he warned there may be a price for the deaf ear Beijing has turned to demands for a purer form of democracy in Hong Kong.

"Occupy Central will now almost certainly happen and continue. It's almost like a slow-motion train crash," he said.

It is, he said, an unnecessary conflict. The limitations on Hong Kong elections are designed by Communist Party officials as safeguards to ensure no anti-China figure can be elected. But Hong Kong, Mr. Tsang said, is unlikely to elect someone counter to its interests with China, which is by far its largest trading partner.

"If they vote for somebody like that they would be inviting Beijing to interfere, and that's the last thing people in Hong Kong want," he said.

Beijing, in "pushing the issue, is actually encouraging those people in Hong Kong who are very vocal and unhappy about being pushed around to react even more strongly," he said. 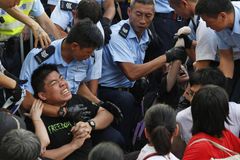 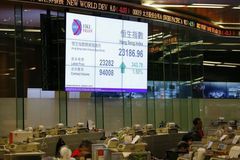 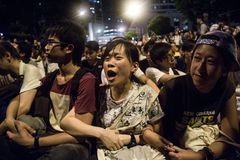