Chinese authorities have released five women's rights campaigners whose detentions for more than a month sparked an international outcry and underscored the government's tight restrictions on independent social activism.

The women were freed Monday under a form of conditional release that keeps the investigation open for another year and still allows for formal charges to be brought later, said Liang Xiaojun, a lawyer for one of them.

The activists, aged from 25 to 32, were known for colorful protests that included "potty parity" sit-ins and street theatre to denounce spousal abuse, and their detentions brought international calls for their release, including from the United States, Britain and the European Union.

U.S. Secretary of State John Kerry said China should "support them, not silence them" in their fight against sexual harassment and other injustices toward women, and #FreeTheFive became a popular Twitter hashtag.

Human rights activists said the release was driven by Beijing's desire to avoid marring its reputation on women's rights and creating a public relations disaster, especially ahead of a September commemoration of a key women's rights summit held in Beijing in 1995.

Amnesty International Regional Director for East Asia Nicholas Bequelin said he had no doubt the release resulted from a political and diplomatic decision at a senior level.

"It shows that China does have a bottom line when it comes to embarrassment on the world stage," Bequelin told The Associated Press. "There's a price that China is not ready to pay to enforce its prohibition on independent organizing."

As of late Monday night, all five had either returned or were on their way to their homes in Beijing and elsewhere in China, including the southern metropolis of Guangzhou and the eastern resort city of Hangzhou. Calls to the Haidian District Detention Center in western Beijing, where they had been held, rang unanswered.

Other lawyers could not be reached by phone, but posted messages on social media saying their clients had been freed.

An anti-discrimination group working with the activists, the Beijing Yirenping Center, said in a statement that continuing to treat the women as criminal suspects was "neither legal nor reasonable." Late last month, Beijing police raided the centre's office and confiscated computers and financial documents.

"They deserve public recognition and rewards," centre co-founder Lu Jun wrote of their activism. "The arrest and detention of them is a glaring injustice."

In a statement, Amnesty International called the women's release an "encouraging breakthrough" but "an incomplete step." It said China must end the investigation and exonerate the five.

Under conditions of their release, the five remain formally under investigation for the next year and must adhere to conditions such as reporting their movements to police and being available for interrogation at any time. They are also barred from discussing the case among themselves or gathering as a group, lawyer Wang Qiushi said.

The women — Wang Man, Zheng Churan, Wu Rongrong, Wei Tingting and Li Tingting — were detained last month as they prepared to distribute posters and stickers against domestic violence on International Women's Day on March 8. They were accused of creating a disturbance and, if convicted, could have been sentenced to up to three years in prison. Five others detained at the same time were released earlier.

While the government has commented little on the case, it appeared that their detentions were linked more to their penchant for media-friendly street action than their advocacy for women's rights.

In 2012, the activists briefly took over public men's restrooms in Beijing and other cities to demand more women's facilities. That year, Li and two other women strolled down a busy Beijing shopping street wearing bloody wedding dresses to denounce domestic violence.

Amnesty's Bequelin said that, given the case's high profile, he expects police to keep a close eye on the five. The legal restrictions on them will likely be sufficient to "if not silence, then considerably mute their voice," he said.

Along with the international outcry, Bequelin said the fact that the women made no political demands helped their cause, along with the weakness of the accusations against them.

"It helped that they hadn't actually committed any wrongdoing," he said. 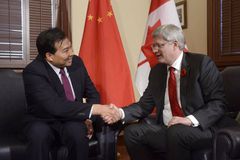