When he landed on the moon, China went wild. When, 42 days later, he went comatose, the country mourned and sang along to Coldplay's 42: "You didn't get to heaven but you made it close." And when his eyes blinked back open this week, Chinese Internet users by the tens of thousands offered their sincere best wishes.

"Hold on there, the whole country's got your back," one person wrote (or the equivalent) on Sina Weibo, the Facebook and Twitter-like Chinese social-media site that has become the launching pad, burial ground and now throne of triumphal return for the Jade Rabbit.

Jade Rabbit is China's lunar rover, a sign of the country's scientific might and an unmistakable symbol of its rising power. Its Dec. 14 soft landing on the moon – the first for any nation's space program since 1976 – vaulted China into an exclusive club of lunar nations. The rover, called Yutu in Chinese, draws its name from an age-old myth about a self-sacrificing bunny who is given the moon as its eternal palace.

To many Chinese people, Jade Rabbit has effectively become the incarnation of that myth – a lonely pioneering space hero, worthy of the sort of affection and sympathy typically reserved for flesh-and-blood explorers.

In part, that has been cultivated through skillful posts to a Weibo account that has become Jade Rabbit's voice. When operational problems began to arise, on Jan. 25, Jade Rabbit himself – it's a he, according to Weibo – raised the alarm, with a post that said: "Oh, something is wrong with me."

Not long after, when it looked as if death was all but unavoidable, came the sad message: "Goodnight Earth, goodnight humans." That post prompted an outpouring of very personal condolences for a piece of seemingly failed engineering that had become, in the eyes of many, a fallen warrior.

"In space exploration, there's great beauty, but there's also great difficulty," one Internet user wrote. "I hope one day you will be resurrected."

Then, this week, that very wish was fulfilled. Jade Rabbit surged back to life. Space engineers called him "fully resurrected," although they cautioned he still suffered a "mechanical control abnormality."

Soon, Jade Rabbit himself spoke on Weibo. "Is anyone out there?" he asked.

China's Internet erupted in cheers. On Friday, Weibo was echoing with a much-posted rendition of the universe offering a Valentine greeting in the form of a rose-shaped galaxy.

"He's like, back, and he's made a heroic recovery," said Kaiser Kuo, a Beijing musician, podcaster and commenter.

With 459,422 online followers, Jade Rabbit is admittedly no match for retired Canadian astronaut Chris Hadfield and his one million-plus Twitter adherents. But Commander Hadfield is a real human beingwho doesn't have to rely on mere earthlings to sing his tunes; he belted out his own celestial rendition of Space Oddity, to universal acclaim. Jade Rabbit is just six wheels, a robotic arm and a pair of solar panels. Still his online following grew by some 50 per cent this week alone. And the steel bunny arguably stokes more passion than the mustachioed Canadian.

"It's got a kind of Rocky drama going on: China as the underdog, 50 years after America put something on the moon – and then there was that real close brush with death," said Mr. Kuo. "I can totally see why people would be elated."

There is, naturally, speculation over who exactly constitutes Jade Rabbit's voice. Officials of China's space authority have denied any ties to the Weibo account; local media have said it is the work of "space enthusiasts."

But Jade Rabbit's Weibo warning of a malfunction preceded official confirmation of any problems. And official media have given a huge audience to the rover's online posts. The state-run Xinhua News Agency even published a "diary" entry from the stumbled hero: "If this journey must come to an early end, I am not afraid."

The rover's propaganda value, particularly now that it's alive again, is immense. Chinese President Xi Jinping has made a mantra of promoting the "Chinese Dream," and the little rabbit makes a perfect fit, particularly in a lunar-focused society.

"This is part of the burgeoning sense of national identity," said David Moser, academic director of an overseas Chinese culture and language program at Capital Normal University.

And, he said, "anthropomorphizing it like crazy gave this impression it was this consciousness up there representing China and talking back to the Chinese people. It's all internationally staged."

By humanizing Jade Rabbit, China has also managed to shield itself from criticism. When the rover looked as if it had failed long before completing its scheduled three-month duties, few saw worrisome engineering defects. They saw instead a brave warrior bested by the fierceness of space.

Using social media to promulgate the story in a country increasingly wedded to the Internet – China counted 591-million online users in late 2013, more than double the United States – is a stroke of particular savvy.

"The social-media generation in coming years will be in charge of China," said Jing Zhao, a well-known blogger known online as Michael Anti.

There's even some faint hope Jade Rabbit will spark change in the tone of China's official communication, which has tended toward the irredeemably dull. If nothing else, it's likely to serve as another lesson in the power of a heartwarming distraction. Public attention has been "diverted from our own problems to the moon," said Zhu Dake, director of the Cultural Criticism Institute at Shanghai Tongji University.

"Issues such as health care, social insurance, pensions, smog and the environment haven't yet been solved. Surely we should be expending more effort on these things than the Jade Rabbit," he said.

But as a marketing effort, Jade Rabbit has been a resounding success, not to mention great comedic fodder. When Xinhua published its Jade Rabbit diary, Jon Stewart pantomimed tears at the pathos of it all: "Hang in there, Jade Rabbit, I've got a little moon dust in the eyes," he intoned.

Canada could send first astronaut to the moon within two decades
August 25, 2013 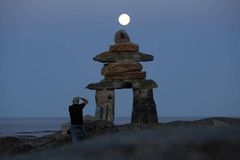