China is pledging to accelerate its efforts to reduce greenhouse gas emissions as part of the Paris climate accord as the Trump administration sows confusion over its pledge to withdraw from the agreement.

After a weekend meeting in Montreal of 34 environment ministers and climate ambassadors, China's special representative on climate change, Xie Zhenhua, said his government sees climate policies as both an environmental necessity and an economic opportunity.

"Climate actions are not a burden to us, but the internal impetus for the sustainable development of our country," Mr. Xie said in an interview.

Read more: U.S. will not seek Paris Accord revamp amid 34 countries' call to action on climate change

Opinion: Is oil a dirty word?

"We do not take climate action because it is required by others. … We want to do so."

The three governments were eager to demonstrate that there is momentum on the Paris climate accord – which commits to limit the increase in average global temperatures to less than 2 degrees C – despite U.S. President Donald Trump's intention to pull support for the deal.

China, the world's largest emitter of greenhouse gases, is offering a robust endorsement of the Paris deal as it pursues a clear game plan to reduce emissions in its growing economy.

Mr. Trump has given official notice that the United States will withdraw from the Paris accord, a process that would take four years, unless it is renegotiated.

It was reported Saturday that a U.S. official in Montreal had indicated the United States could remain in the Paris deal, but the White House issued a statement reiterating its intention to withdraw unless it could "re-enter on terms that are more favourable to our country."

However, ministers in Montreal agreed that the Paris deal is "irreversible and non-negotiable," Ms. McKenna said at a concluding news conference on Saturday.

She said the U.S. position on withdrawal appears unchanged, but added that the Trump administration is willing to engage other countries on climate issues, and "recognizes the economic opportunity of clean growth, including clean energy." Several ministers who attended the meeting said the U.S. delegation acknowledged that the Paris deal would not be renegotiated.

Secretary of State Rex Tillerson added to the confusion on Sunday when he again appeared to suggest that the United States could remain in the accord, despite the insistence of the other parties that the terms would not be renegotiated.

The administration is looking "for other ways in which we can work with partners in the Paris climate accord," Mr. Tillerson said on CBS's Face the Nation. "We want to be productive. We want to be helpful."

Mr. Trump's chief economic adviser, Gary Cohn, is now overseeing the issue for the administration and is scheduled to meet on Monday in New York with Ms. McKenna and climate ministers from several other countries to discuss ways in which the United States can remain engaged.

Mr. Trump not only served notice of his intention to withdraw from the Paris Agreement but indicated that his administration will not provide funds committed by the previous administration to help developing countries reduce emissions and adapt to climate change. Nor will the United States be bound by the pledge by former president Barack Obama to reduce greenhouse gas emissions by up to 28 per cent below 2005 levels by 2025.

However, the United States will remain members of the UN Framework Convention on Climate Change – the body that oversees climate negotiations – and will send delegations to the meetings needed to implement the Paris Agreement, including the Conference of the Parties in Bonn in November.

The federal Liberal government is working aggressively to engage the Trump administration in climate action, even as Ottawa and other countries look to pick up the leadership role in the Paris process.

As Mr. Trump has moved to reverse Mr. Obama's climate-change policies, Prime Minister Justin Trudeau is facing pressure from some in the business community, especially in the oil and gas sector, to slow the implementation of carbon taxes and other GHG regulations in order to protect the competitiveness of Canadian industry.

Indeed, the Chinese are keen to assert a leadership role in the global climate fight, seeing economic as well as diplomatic gains. Beijing is investing heavily in clean energy technology, including wind, solar and energy storage, with a view to grabbing a large share of rapidly growing export markets.

In the interview in Montreal, Mr. Xie said the Chinese government is shifting its growth model from one that depended on heavily polluting, carbon-intensive industry and coal-fired

power to a "more sustainable economy."

China is launching a nascent cap-and-trade system later this year, in which industries will face emissions limits but have the right to purchase allowances in a carbon market, similar to the approach taken by Quebec, Ontario and California.

Mr. Xie said Beijing will also dramatically increase the country's production of electric vehicles, although he said there is currently no plan to end the sale of gasoline- or diesel-powered vehicles, as was widely reported last week.

Over the past decade, China has reduced the energy used per unit of Gross Domestic Product by 34 per cent, and GHG emissions per unit of GDP by 38 per cent, he noted.

After growing rapidly since 2000, coal production and consumption appears to have peaked in 2013, and has declined each year since then, while non-fossil-energy production has nearly doubled as a percentage of total energy produced.

However, China maintains it is still a developing country, and should not be required to make the kind of steep GHG reductions pledged by the United States, Canada, Europe and the rest of the developed world.

Instead, it has pledged to ensure its GHG emissions peak before 2030, a commitment that Mr. Xie said the country is well-positioned to meet and exceed.

Meanwhile, Chinese leaders have encouraged the United States to remain in the Paris accord and work with the international community to reduce the threat of global warming.

"We must implement the Paris Agreement and all parties must honour our commitments through concrete actions," Mr. Xie said.

U.S. could stay in Paris climate accord under right conditions: Tillerson
September 17, 2017
Trump administration moves to open Arctic refuge to drilling studies
September 16, 2017
How do hurricanes form? A lesson in the science behind the storm
September 10, 2017 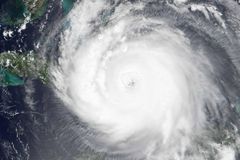