When primary school administrators in the U.K. choose study materials for the fall semester this year, they will have a new option: math textbooks imported from Shanghai, a city celebrated as a global math power.

In the books, the British pound will replace references to the Chinese yuan. But in just about every other way, the versions of Real Shanghai Maths available in London will be exactly like those used in China, the ideas, sequencing and methods kept intact.

It is a remarkable admission by British education authorities that their own methods have stumbled, and that Chinese educators – after years of racking up world firsts in math scores – have developed something admirable enough to import in whole cloth.

"This deal that we've done is a recognition that they're producing content that is of a fantastically high quality," said Mr. Hughes, who is managing director for Collins Learning, the education division of HarperCollins, which is publishing the texts.

In China, it represents something more significant. The export of textbooks is a historic moment, as China stages a broad effort to become a superpower whose might extends beyond military and economic means.

Education is a key element in that strategy, one that has brought a swell of Chinese investment overseas, through university campuses, children's books and concerted efforts to revamp its own systems of instruction as it seeks to elevate its soft power.

Long derided for an education system that values rote over thought, the idea that others could covet China's instructional methods runs counter to long-standing views on the country.

But serious educational change in China began more than a decade ago, as functionaries and educators opened the door to experimentation in schools, eager to modernize a moribund education system built to manufacture engineers and bureaucrats.

"The government is well aware that there's a crisis in education," said David Moser, the academic director of an overseas studies program in Beijing.

"The reason for the crisis, of course, is that China realizes that they are losing their best and brightest students to ... foreign universities," he said.

"They really need creative minds and creative young people developing ideas to build the economy they want," a future built on digital prowess and invention rather than concrete and steel.

"Whether or not China succeeds will determine China's fate for the next 20, 30 years," said Jiang Xueqing, a Harvard researcher who also consults for Chinese schools on creativity.

At the same time, as China rises in influence, "it realizes that it can actually one day challenge American hegemony," Mr. Jiang said. One way to do this is to make places like Peking University and Tsinghua University "the epicentre of China's soft-power push.

One Chinese school is even physically setting up in the U.K.

Earlier this year, Peking University, long the most elite name in Chinese education, bought a medieval campus in Oxford to serve as the overseas branch of its business school. The school called it a "milestone" in "the development of China's higher education. … China is opening its higher education market to the world."

There are major obstacles, Mr. Jiang said. A university like Tsinghua remains rigid and hierarchical. A friend of his once compared it to West Point, the U.S. military academy.

"It's just not enough to reach out. You need to actually have values and a system in place that appeal to the world's future leaders," he said.

But opening campuses abroad, he said, offers a chance for China to "reverse-engineer creativity."

At home, meanwhile, the country has poured money into education, hiring foreign experts and wooing foreign youth. China now counts four universities in the QS World University Rankings top 100, and local schools have brought in people from all over the world, with some 440,000 overseas students in China last year. That is not far off the 523,700 Chinese students abroad in 2015.

It is creating new materials for export, too.

Han Yuhai, a language and literature professor at Peking University, has written a pair of children's books on Mao Zedong and Karl Marx that have been translated into English, Dutch, Nepali and Italian, with 100,000 copies sold.

China is led by the Communist Party, and students around the world would do well to learn more, Prof. Han said. His books are meant to answer questions like "What role did Marx and Mao's thinking play in China's development? What do they mean to China today?"

Even so, China's elite students often reject their country's education system. Top scorers in China's annual gaokao college placement exam regularly are educated in Hong Kong, which is seen as having better schools. Only 15 per cent of Chinese doctoral graduates of foreign science and engineering programs return home full-time, although that number has risen.

"The very best people are either not coming back, or they're coming back part-time," said David Zweig, a scholar at the Hong Kong University of Science and Technology who is writing a book on the subject.

In math, however, China has won international plaudits. Its teachers use the "mastery" method, ensuring each student has wholly grasped a concept before moving on – a method that has produced stunning results. In 2009 and 2012, Shanghai students led the world in global math testing from the Programme for International Student Assessment.

The city's success has prompted the U.K. to stage a major turn toward China on math, sending British teachers overseas and then inviting a few dozen Shanghai teachers to take over British classrooms.

The British government has allocated $71-million to train teachers in the methods used in Chinese schools.

To provide them with material, HarperCollins has pursued two projects to source Chinese learning materials, one to replicate the Shanghai textbook and another, working with East China Normal University Press, to adapt Shanghai's "One Lesson, One Exercise" workbooks that use Chinese methods and the British curriculum.

In total, 63 books are being prepared for use in British schools. (Oxford University Press has also created books for the U.K. based on the Singaporean math program.)

Still, even Chinese math experts have doubts about how well their system can be exported. In Shanghai, math teachers from primary school onward are specialists who are expected to conduct their own research, regularly confer with colleagues to share ideas and enjoy classrooms filled with students already prepped by private tutors.

Merely translating a Shanghai textbook into English stands to "bring many difficulties" for students in the U.K., said Ni Ming, a commissioning editor at East China Normal University Press, and one of Shanghai's top experts on math instruction.

He sees more promise for his company's adapted workbooks, and is already beginning to convert Shanghai junior high school materials for use in the U.K., even as he looks at other subjects, such as physics and chemistry, where other countries might be interested in Chinese methods.

HarperCollins has engaged in a similar process. "We're asking ourselves, where is the best science pedagogy in the world?" Mr. Hughes said. He expects other foreign markets will also be interested in the Shanghai math textbooks, pointing to elite schools in the Middle East and India as potential buyers.

He acknowledges that schools and teachers may balk at the idea of importing an entire foreign system.

But he is convinced that those who bet on the translated textbooks will come out winners.

"They will actually find that their students will outperform the U.K. national curriculum quite significantly," he said. 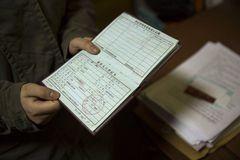 Chinese textbooks’ reinvention of Thomas Edison raises education concerns
May 2, 2017
Follow Nathan VanderKlippe on Twitter @nvanderklippe
Report an error Editorial code of conduct
Due to technical reasons, we have temporarily removed commenting from our articles. We hope to have this fixed soon. Thank you for your patience. If you are looking to give feedback on our new site, please send it along to feedback@globeandmail.com. If you want to write a letter to the editor, please forward to letters@globeandmail.com.
Comments