Northern China woke up to another day of lung-defiling smog Wednesday, amid the country's latest bout of ugly air. The pollution smothering the region has now grown severe enough to provide a new opening for citizens to criticize the state for doing too little to battle the problem.

On Friday, a court in Shijiazhuang will decide whether to hear a lawsuit by Li Guixin, a man in heavily polluted Hebei province who is suing the local government over the severity of the fouled air. The legal challenge, launched Feb. 20, was reported in approving terms by a state media that in recent weeks has taken an unusually activist role in pressing authorities to more rapidly beat back the smog that has become a significant quality of life issue for the country's rising middle class.

"I want to show every citizen through my action that we are the victims of the pollution," said Mr. Li in comments reported by Xinhua, the state news agency. "We are affected physically and economically, and we shouldn't be the ones to pay for all this."

He launched the suit against driving restrictions imposed by the local government, which he said is undue punishment of the public for the inability of officials to counteract the air that has become the toxic byproduct of China's rapid economic rise in the past three decades. According to Xinhua, the chief engineer of the Shijiazhuang environmental protection bureau "recognized" the lawsuit and said "[it] will work scrupulously to fulfill its duties in combatting air pollution."

Though bad air is common, weather conditions have kept a blanket of smog over northeastern China for nearly two weeks now, with several cities on Wednesday morning reporting a "beyond index" air-quality reading.

In Shijiazhuang, levels of tiny particles called PM2.5 reached 575, while PM10, a measure of larger particles, hit 843. Health authorities say 25 is the safe level for PM2.5. On Tuesday, an official with the World Health Organization in Beijing called the extended smog a "crisis" that is responsible for real health concerns, including an elevated risk of lung cancer. Studies have also linked coal-burning in northern China to a dramatic reduction in expected lifespan, while a raft of new research has found that PM2.5 can cause increased rates of cardiovascular, cerebrovascular and respiratory diseases.

On Wednesday, the U.S. embassy in Beijing rated the capital's air as "hazardous." Earlier in the month, a report from the country's Social Science Academic Press and the Shanghai Academy of Social Sciences called the city's air "barely suitable" for human life.

China does not suffer the world's worst air. That unfortunate distinction likely belongs to India, which also has the highest death rate on earth from chronic respiratory diseases, along with the most asthma deaths.

But China's noxious air – along with a long series of food and water quality scares that have raised fears over just about everything people put in their mouths – has emerged as one of the key risks to the power of the Chinese Communist Party, whose authority is derived in large measure from its social contract to provide an increasingly better quality of life in exchange for unquestioned political authority. Beijing has pledged over $540-billion in spending to target air quality, and, in recent days, Beijing has urged the closing of factories and construction sites in an effort to limit the severity of the recent bad air, which is expected to last through Thursday.

But the government's efforts can only be successful if it is able to shut down heavily polluting industries, and perhaps even limit access to roads in a nation whose middle class has grown enamoured with cars. Such change involves inflicting pain, and central authorities have allowed a remarkable flourishing of critical discourse as one means of clearing the way for it to happen. State television has called PM2.5 an "invisible killer," while its newspapers last week called the persistent smog "indefensible."

Yet the criticism also poses potential problems for the government, as an attack on its own legitimacy. In an unusually sharp rebuke, the official China Daily newspaper last week lashed out at authorities in what some observers saw as defiance over the pollution issue. 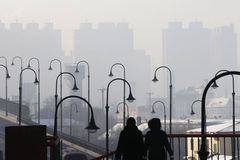 How to fix China’s pollution problem? It may not be able to afford it
November 2, 2013 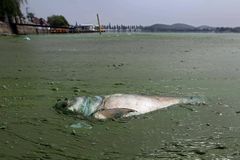