The head of Burundi's journalists' union spends all but half an hour each day in a tiny room in an undisclosed location in the capital in fear for his life, as this central African nation is engulfed in turmoil over the president's decision to run for another term.

Alexandre Niyungeko says he received death threats after publicly opposing the president's plan to run again. Like dozens of other human rights activists, journalists and opposition officials he has gone into hiding to protect himself from what he says are death squads backing the government.

A climate of fear has engulfed Burundi as attacks against those opposed to President Pierre Nkurunziza are on the rise.

"The life of anyone who opposes Pierre Nkurunziza is in danger. People are being assassinated here and there," leading opposition figure Agathon Rwasa told The Associated Press.

The protests, which have left 20 dead and hundreds injured, came to a head on May 13 when an army general announced a coup against the president while he was out of the country at a regional summit about the crisis in neighbouring Tanzania. The attempt was defeated in 48 hours and has been followed by a spike of attacks on anyone opposing the president.

On May 23, opposition leader Zedi Feruzi, who had called for the protests, was killed in a drive-by shooting that also killed a bodyguard and wounded a journalist. A day earlier two people were killed in a grenade attack on a market

Some neighbourhoods in the capital are now experiencing almost daily running battles between police firing live bullets and stone-throwing protesters who vow not to leave the streets until the president drops his candidacy. Protesters barricade their neighbourhoods at night and stay awake in fear of late night attacks by police or pro-government militia.

Even the vice-president of the country's election commission doesn't feel safe and fled the country over the weekend. Spes-Caritas Ndironkeye left for Canada without notifying her boss, said commission spokesman Prosper Ntahorwamiye.

The media in particular has been targeted, with grenade attacks against four independent radio stations and a TV station, leaving just the state-owned media on the air. Journalists who witnessed the attacks charge that it was done by government intelligence officials and police.

"I am deeply worried by the extremely tense situation in Burundi. We are receiving alarming messages from human rights defenders and journalists fearing for their safety," the U.N. High Commissioner for Human Rights Zeid Ra'ad Al Hussein said recently.

Burundi, a country of 10 million people which exports mostly coffee and depends heavily on foreign aid, experienced an ethnic-based civil war from 1993 to 2003 which killed at least 250,000 people.

The current violence has led to a mass exodus of more than 90,000 refugees fleeing the country since the protests began, many of whom fled violence before.

Presidential elections are slated for June 26, but regional leaders on Sunday called for the poll to be postponed to create an environment more conducive to the polls.

Niyenguko, the head of the journalists' union, said he went into hiding after he was told that members of the ruling party's youth wing were planning to kill him.

After he gave an interview on TV about the coup saying it was the consequence of Nrurunziza's candidacy, he received dozens of messages telling him his days were numbered.

He then moved his family to somewhere he hoped they would be safe and chose another location for his own hiding place.

"It's a shame and irresponsible to see security forces and intelligence service attacking media daily, as if there were no laws," he said. "I feel like a father who is unable to protect his own children." 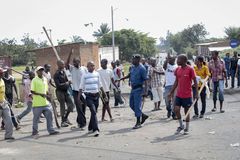 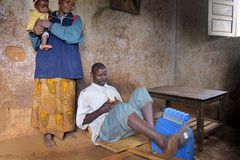