Hillary Clinton rolled into this little agricultural town on Tuesday for the first campaign stop of her run for the presidency: a roundtable talk with students and educators.

According to participants, she talked about why she wants to help American families and why everyone in the United States, rich and poor, should get a good education.

But, except for those who were there, what she said didn't matter. What mattered was that she said it in Iowa.

Every four years, this friendly Midwestern state becomes the object of a feverish courtship. No other jurisdiction on the planet is so desperately sought after by politicians on the make.

Leaving behind the mahogany-panelled offices of Washington and the marble halls of state capitols, presidential hopefuls from both the major parties line up at Iowa's door like nervous suitors with posies of wildflowers clutched behind their backs.

The state holds the first voting contests of the presidential-election season: the famed Iowa caucuses. Winning can put an outsider in contention, as it did Barack Obama in 2008. Losing can trip up a leading candidate, as it did Ms. Clinton in the same year, when she came a disappointing third.

The Clinton campaign is determined not to let that happen again. Almost as soon as she announced in a video on Sunday that "I'm running for president," her campaign said she would be heading out to Iowa, making the Hawkeye State a focus of her second effort to win the Democratic Party nomination. As if to prove she is Iowa folksy, she left behind the usual jet plane and made the 1,600-kilometre journey from New York by road in a van nicknamed Scooby.

The need to woo and win Iowa brought the former first lady, senator and secretary of state all the way to Monticello, a town of 3,796 souls surrounded by rolling hills, stubbly corn fields and grain silos. It sits about 40 minutes from Cedar Rapids in eastern Iowa.

After her roundtable talk at a community-college campus besieged by throngs of media, she was to hold meetings with Democratic activists from the area. Those meetings are just the beginning of an eight-month campaign to reverse the disappointment of 2008 and sew up enough Iowa Democrats to give her a clear victory in the caucuses this winter.

Local party notables get the full come-on. Linda Langston, 61, a party veteran who is the supervisor of Iowa's Linn County, says Ms. Clinton's people asked her to sit down for a meal with the candidate – "just a couple of us joining her to have a bite to eat," as she casually put it. Bret Nilles, party chair for Linn County, said he, too, has been asked to a meeting with the candidate.

In any other state, it would be unusual for such small fry to get face-to-face contact with one of the most famous women in the world in the hectic early days of a presidential election campaign.

In Iowa, it is perfectly normal. Ms. Langston has met Ms. Clinton four times before. In the 2008 campaign, candidate Obama asked her to join him in his van as he drove to the airport one day. They talked baseball and admired the roadside vista of waving corn and black-eyed Susans. He got her vote in the caucuses.

Another local Democrat, Todd Taylor, 48, who represents Cedar Rapids in the state legislature, struggles to remember all the presidential campaigners he has met since he went to his first caucus at the age of 18. John Kerry, Al Gore, Bill Richardson, Howard Dean, John Edwards, Bill Clinton – he gives up listing them.

He admits he likes the attention, if only because it allows him to tell friends and neighbours about how the candidates come across. He is leaning to Ms. Clinton this time, but "I don't want to commit too early because I want the others to court me."

The pursuit of politically active Iowans like Mr. Taylor promises to be especially ardent this election cycle. The field of Republican candidates is growing – Senator Marco Rubio of Florida was the latest to join, on Monday – and those who want to make an early splash are bound to head here in the coming months. New Jersey Governor Chris Christie is reported to have visited the Hawkeye State a dozen times to build support. On the Democratic side, prospective candidates James Webb, a former Virginia senator, and Martin O'Malley, the former governor of Maryland, were both in Des Moines on Friday to address a party gathering.

But it is Ms. Clinton who is expected to make the biggest push in Iowa. Along with being a key to the party nomination, Iowa is a swing state in presidential elections. As the probable Democratic nominee, she is already thinking about how Iowa could help her when Americans vote in November, 2016.

Iowa is also a key to remaking her image. In the up-close-and-personal politics of the state, she hopes to dispel the idea that she is remote or out of touch – a Washington insider with no feel for how ordinary people live.

After the stinging experience of the 2008 caucuses, when she focused on reaching people through rallies and other big events, she intends to spend more time in this campaign meeting people in the small-group settings that are the meat and potatoes of Iowa politics, local Democrats say. That means going to parades, fairs, union halls and living-room pot lucks from Dubuque to Sioux City.

"She understands she has to come here and meet with the folks," says Tom Larkin, a former regional representative for Tom Harkin, who was an Iowa Senator from 1985 to 2015. "Iowans like to sit across the table and ask questions directly to the candidate."

That seems a lot to expect. In a time of mass communications and social media, the idea that candidates for the leadership of the world's most powerful nation should get their message out at backyard barbecues or in one-on-one chats can seem quaint and impractical. Imagine the logistical headaches that come with getting the closely guarded, minutely scheduled Ms. Clinton to all those small events in all those scattered communities. Critics say that it's wrong to give a whiter-than-average farm state of only 3.1 million people such an outsized role in selecting a president for a nation of 324 million. Iowans retort that coming to the state forces candidates to get out of the bubble of political life and defend their ideas to ordinary people. That makes them sharper candidates. It also helps offset the influence of party elites.

"It's really a great feature of the system that it's not just powerful rich people in a room that get to talk about their issues," said Rachel Paine Caufield, who teaches politics at Drake University in Des Moines. "It's anyone who shows up to a meeting and wants to ask a question."

The end of the process is exceptional and unique. Consider how the Democrats organize their caucuses. One winter day every election year, party members meet in each of the close to 2,000 state precincts. Participants make a pitch for the candidate they prefer. Then they break into groups, each representing a candidate. If a group falls below a certain percentage of the participants, the group is forced to disband. Other groups can try to persuade them to join. "A lot of bargaining and negotiation starts to happen," says Prof. Caufield. At the end of it all, party delegates are assigned on the basis of the results and everyone goes home to bed.

In the months leading up to the Iowa caucuses, anyone active in party politics in Iowa can expect a lot of phone calls, invitations to coffee and even summons to meetings with leading candidates for president of the United States.

An old joke has one Iowan asking another: "Have you decided whether to back Candidate Smith yet?" "I don't know. I've only met him four or five times." 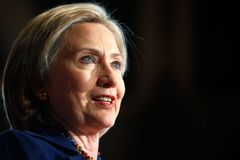 Hillary Clinton on the campaign trail to Iowa (in a van named Scooby)
April 13, 2015 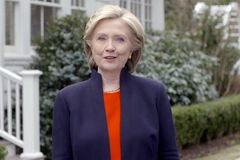 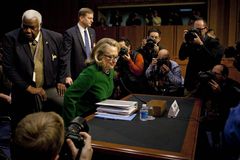