Jessica Ghawi had known luck at least once in her life. Last month, she stepped out of the Eaton Centre minutes before a gunman sprayed bullets in a packed food court. The brazen shooting killed two, wounded six and rattled a city's sense of safety.

Early Friday, thousands of kilometres away from Toronto, the 24-year-old found herself in another crowded public space: a movie theatre in Colorado where she'd gone to catch the premiere of The Dark Knight Rises.

Improbably, a lone shooter opened fire on this crowd, too. Seventy-one people were hit, with at least 12 dead, including Ms. Ghawi, who took a fatal bullet to the brain.

Her death – so coincidental as to almost defy belief – has made her the unlikely, and unlucky, poster child for being in the wrong place at the wrong time: a statistical oddity who escaped one violent, public tragedy only to die in another the next month.

In the weeks before her death, she'd adopted a new perspective on life, triggered by her experience at the Eaton Centre. "I was reminded that we don't know when or where our time on Earth will end," she wrote on her blog.

Ms. Ghawi, an aspiring journalist, and her friend Brent Lowak were sitting in the middle of the theatre when a hissing sound filled the room, according to Ms. Ghawi's brother, Jordan, who recounted Mr. Lowak's experience after meeting him at the hospital.

As patrons fled from their seats, a gunman opened fire. Ms. Ghawi and Mr. Lowak dropped for cover, Mr. Ghawi wrote on his blog.

She took a bullet to her leg and, as Mr. Lowak tended to her wound, he was also shot. Ms. Ghawi was then shot in the head and went unconscious. Mr. Lowak fled from the theatre and called Ms. Ghawi's mother.

What was particularly chilling about Ms. Ghawi's death, according to Adrian Dater, the young woman's friend and mentor, was that the last time they'd met up for beers, she'd told him about narrowly escaping gunfire last month at the Eaton Centre.

Ms. Ghawi, who lived in Colorado, was in Toronto in early June visiting her boyfriend, minor-hockey player Jay Meloff (who lives in Markham, Ont.). She went to the mall food court to get sushi, changed her mind and got a poutine and burger, leaving three minutes before the shooting began.

A few days later, she blogged about how a "funny" feeling came over her after she purchased her meal and she left the mall. She later told Mr. Dater, a veteran hockey reporter with the Denver Post, that at that moment she'd had an eerie premonition.

"She said she held a boy in her arms that had been shot," Mr. Dater said as he described her vision. She walked away from the incident not wanting to take anything for granted, he said.

After a short time at Texas A&M University, Ms. Ghawi moved to Colorado to pursue her dream of covering hockey. She went by the surname Redfield professionally – it was the maiden name of her grandmother, who wanted to pursue journalism but never had the chance.

Despite being a rookie who'd never held a full-time reporting job, she quickly won over many industry veterans. Robin Carlin, a reporter at MileHighSports.com, said Ms. Ghawi went to parties held for high-profile sports reporters and often chatted up the all-stars on Twitter.

During her last meeting with Mr. Dater, Ms. Ghawi confessed she was growing frustrated with her job hunt. She'd just moved into a new apartment on her own in Aurora and was concerned about how she wasn't making enough money. Ms. Carlin helped Ms. Ghawi land an interview at her company, which was scheduled for the day the young woman died.

As she tried to find her dream job reporting on hockey for a TV station, Ms. Ghawi tried to keep her relationship with Mr. Meloff under wraps, Mr. Dater said. "She didn't want it out that she was dating a hockey player. That might look bad," he said.

Mr. Meloff had his last conversation with his girlfriend before she went to the theatre. "She said for me to sleep well. She knew it was late here," Mr. Meloff said. "That was the last thing we ever got to say to each other."

Mass shootings almost always claim their victims at random, but it's highly improbable to be caught up in two such events, said University of Toronto statistics professor Jeffrey Rosenthal.

Prof. Rosenthal pointed out that the odds of having one near-miss and then being shot at again are even a challenge to calculate.

Alan Lipman, the founder and director of the Center for the Study of Violence in Washington and a professor at George Washington University medical centre, said trying to avoid something this rare is a futile exercise.

"It would be like saying, 'How would I protect myself against being hit by a flying piece of an orbiting space station?'" Dr. Lipman said.

Readers react: 'I will not be going to see The Dark Knight Rises tonight'
July 20, 2012
Obama ‘shocked, saddened’ over Batman movie shooting
July 20, 2012 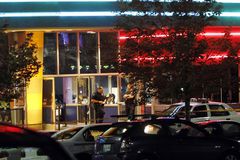