In one of Africa's poorest countries, more than $750-million (U.S.) in mining revenue disappeared before it could reach the national treasury, an investigation has found.

The money from mining companies in the Democratic Republic of the Congo was diverted over a three-year period, with much of it siphoned off by politically connected insiders at opaque tax agencies, according to a report by Global Witness, an independent research group.

The findings are significant for Canadian mining companies, which have been major investors in Congo and have given millions of dollars in payments to official agencies and state enterprises in the country.

Under new federal laws, Canadian mining and energy companies must disclose all payments to all levels of governments at home and abroad. Those disclosures, most of them released this year for the first time, show that Canadian companies have paid many millions of dollars to Congolese agencies.

Toronto-based Banro Corp., for example, disclosed on May 30 that it had paid $10.8-million in taxes, fees and royalties in Congo last year, while Vancouver-based Ivanhoe Mines Ltd. disclosed that it had paid about $6.3-million in taxes and fees in the country last year. Banro operates gold mines in Congo and Ivanhoe is developing copper and zinc mines.

"Testimony and documentation gathered by Global Witness indicates that at least some of the funds were distributed among corrupt networks linked to President Joseph Kabila's regime," the report says.

In a statement, Pete Jones, senior campaigner at Global Witness, said: "Congo's mining revenues should be helping to lift its people out of poverty, but instead huge sums are being siphoned away from the public purse and into unaccountable agencies headed up by people with ties to political elites. Some of the transactions we've looked at paint a picture of these agencies as a cash machine for Kabila's regime."

Congo, one of the biggest countries in Africa, is also among the poorest. It is ranked 176 out of 188 countries in the latest United Nations Human Development Report, with 77 per cent of its population surviving on less than $2 a day. More than 40 per cent of its children have stunted growth because of malnutrition. Roads, hospitals and schools are poorly funded and often in terrible condition.

Yet at the same time, Congo has vast mineral resources, attracting huge investments from foreign companies because of its low production costs and high-quality minerals. It is the biggest copper producer in Africa, and it produces 60 per cent of the world's cobalt. Up to $10-billion worth of copper and cobalt is extracted and exported from Congo every year, yet only 6 per cent of this revenue is reaching the national budget, the Global Witness report says.

In total, foreign mining companies are paying more than $1-billion annually in taxes, royalties and other payments in Congo, but a large fraction goes missing, the report says. "Year after year, Congo is losing out on a fortune."

Looking at data from 2013 to 2015, the report estimates that $753-million in Congo's mining revenue did not reach the national treasury. Instead it was held back by state-owned mining companies and national tax agencies, which did not explain what they did with the money.

In addition, a further $570-million over three years was paid to small government agencies and a provincial tax agency that failed to account for the funds. This means that 30 to 40 per cent of annual mining payments in Congo are never reaching the national treasury, the report says.

One of the main reasons is an obscure law that allows Congo's national tax agencies to hold back a portion of mining revenues for their own use. "What happens to this money is unclear," Global Witness says in the report.

"The agencies are secretive and often headed by powerful individuals with close professional or personal ties to the Prime Minister's office or to the Presidency. The opacity around the withheld funds makes this system highly susceptible to corruption."

The tax agencies are also permitted to issue penalties to mining companies for tax violations and keep a proportion of the fines, which can be enormous amounts. This encourages "predatory behaviour" and corruption at the agencies, the report says.

Another key reason for the disappearing revenue is the state mining company, Gécamines, headed by a close ally of Mr. Kabila. While it provides little to the national treasury, and its employees often go for months without salaries, Gécamines has handed out millions of dollars in cash in suspect transactions to unknown persons, the report says.

In 2014 and 2015, for example, it says the state company earned more than $514-million in revenue from the mining sector, including payments from foreign mining companies, yet it transferred less than $37-million to the government.

Foreign mining companies that pay multimillion-dollar amounts in Congo should use their influence to persuade the official agencies and state companies to become more transparent and publish audited annual accounts, the report says. 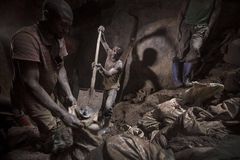 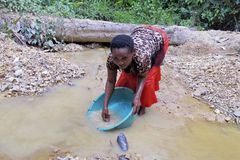 Canada commits $97-million to Congo under feminist foreign-aid policy
July 5, 2017
Follow Geoffrey York on Twitter @geoffreyyork
Report an error Editorial code of conduct
Due to technical reasons, we have temporarily removed commenting from our articles. We hope to have this fixed soon. Thank you for your patience. If you are looking to give feedback on our new site, please send it along to feedback@globeandmail.com. If you want to write a letter to the editor, please forward to letters@globeandmail.com.
Comments