On one hand, the former engineering professor has been catapulted from a life of relative obscurity to one of instant eminence as the first freely elected president of the Arab world's most populous state. He spent the morning with his wife touring their new home – an opulent residence once occupied by his predecessor, Hosni Mubarak, who presided over a vicious crackdown on the Muslim Brotherhood, the Islamist organization whose influence helped propel Mr. Morsi to power.

That first taste of the presidency, however sweet, was short-lived. It was soon eclipsed by a series of bitter challenges that threaten Mr. Morsi's credibility even before he is officially sworn in. He met with Egypt's powerful military, the same generals who have already undermined his authority by stripping away key powers from the presidency, to discuss the formation of a new cabinet. He also found himself fending off international accusations that he intends to reconsider Egypt's peace treaty with Israel and forge closer ties with Iran.

Mr. Morsi later denied he had made the comments, which were published by Iran's Fars news agency early yesterday. But the gathering clouds of controversy, both internal and external, highlight the precariousness of Mr. Morsi's hold on power, and the difficult balancing act that lies ahead.

"He has to balance the demands of the street, which does not uniformly support him, and he has to figure out how to deal with the military and the international community. It's a lot," said Stephen A. Cook, a senior fellow for Middle East studies at the Council on Foreign Relations.

Mr. Morsi's alleged comments regarding Iran were particularly unsettling to Western powers and their allies in the Persian Gulf, which have been trying to isolate the Islamic Republic over its nuclear program. According to the Fars news agency interview – which was apparently conducted in Cairo before it was announced that Mr. Morsi had won the election – he was seeking to strengthen ties with Iran to create a strategic "balance" in the region.

"We must restore normal relations with Iran based on shared interests, and expand areas of political co-ordination and economic co-operation because this will create a balance of pressure in the region," Mr. Morsi was quoted as saying in a transcript of the interview.

Iran subsequently named a Tehran street after Mr. Sadat's assassin, Khalid Islambouli, which infuriated Cairo. Eventually, in 2001, the Tehran city council renamed the street "Intifada Street" in an attempt to improve relations. Mr. Mubarak's departure has only accelerated that process.

When Mr. Morsi was declared the winner of the Egyptian presidential race, Iran was among the first countries to congratulate him, declaring the ballot a "splendid vision of democracy" that marked the end result of an "Islamic awakening."

The overtures make the West and its allies nervous. With the Muslim Brotherhood in power or ascendent in a crescent of countries stretching form Morocco to Turkey, the Islamist group is in a position to reshape the entire region in a way that could threaten Western interests.

Mr. Morsi's denial that an interview with Fars had even taken place reflects the Muslim Brotherhood's broader strategy of assuaging fears about its intentions. In his victory speech, he promised to forge a path of unity and reach out to all segments of Egyptian society. He also vowed to honour Egypt's international treaties with its neighbours, including Israel.

Tel Aviv, however, remains deeply wary of the Egyptian president, and the Brotherhood's true plans. But Mr. Morsi's alleged interview with Fars triggered a storm of controversy in Israel, over concerns that the peace treaty – the linchpin of U.S. Mideast policy, but deeply unpopular among Egyptians – was suddenly up for renegotiation.

"Morsi did not give any interview to Fars and everything this agency has published is baseless," said one of Mr. Morsi's spokespeople.

Analysts said regardless of whether the interview took place, the focus right now for Mr. Morsi and Egypt is on domestic issues. Observers do not expect a significant shift in Egypt's foreign policy with a crisis still simmering at home.

That preoccupation with domestic policy was apparent in Mr. Morsi's campaign. He issued a five-point plan of how he would spend his first hundred days in office – focusing on issues of traffic, security, street cleanliness, bread and fuel.

With a charged atmosphere still reigning in Egypt, where protests continue over the role the military will play in the country's future, it's abundantly clear the issues Mr. Morsi campaigned on will take a back seat to the bigger challenges that loom.

"You are going to see this great game between the Brotherhood and the military," Mr. Cook said. "The bottom line is, the military is not just going to give up power after 60 years of holding it in the palm of their hands."

Opinion
No more illusions about Egypt after Mubarak
June 26, 2012 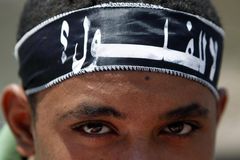 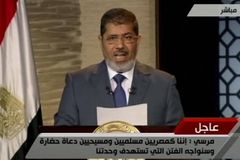