Goodluck Jonathan's election rally in this war-ravaged region of northeastern Nigeria, like his presidency itself in recent years, was something of a shambles. Even before he arrived, people in the crowd were angrily hurling plastic chairs at the whip-wielding police who guarded the stage.

The reason soon became clear: Some of the crowd were chanting the name of his main opponent, Muhammadu Buhari. When Mr. Jonathan finally delivered his speech, most people had already left or were heading to the exits. There was a loud hubbub of conversation as most of the remaining spectators ignored his speech. At the end, he received only brief scattered applause.

Mr. Jonathan, widely criticized for his slow and ineffective response to Boko Haram's deadly insurgency in northern Nigeria, is now locked in the toughest political battle of his life. Opinion polls, though not always reliable in Nigeria, suggest that he is in a tight race with Mr. Buhari.

One poll by the Afrobarometer agency found that the Feb. 14 election is a dead heat, with each of the two main parties supported by 42 per cent of voters. It's the first time in Nigerian history that an opposition party has been so close to an election victory.

Mr. Jonathan could still win. Nigerian elections are heavily influenced by regional power-brokers who can mobilize busloads of voters at the last minute – or discourage them from voting. Cash payments and financial deals with local leaders can determine the voter turnout. And there's little question that Mr. Jonathan's ruling party, the People's Democratic Party, has more resources for advertising and campaigning than the opposition.

Mr. Jonathan, often an awkward and uncharismatic speaker, is still popular in some parts of southern Nigeria, including the Niger Delta, his home region. But the north, where Boko Haram has kidnapped hundreds and massacred thousands, is increasingly disgruntled by his rule.

One key reason is the rampant corruption that has demoralized and weakened the Nigerian military. Corruption was already widespread in this oil-rich country before Mr. Jonathan took office in 2010, but under him it has continued to thrive. Military units, filled with unpaid soldiers and poorly equipped because of stolen or diverted budgets, have sometimes fled from Boko Haram attacks with only token resistance.

At Mr. Jonathan's rally last Thursday in Yola, capital of the northeastern state of Adamawa, warplanes from the Nigerian Air Force circled above the crowd, apparently providing security for the President, although Boko Haram lacks any air force. Mr. Jonathan won a majority in this state in the previous election in 2011, but now Boko Haram has captured several towns in the north of the state, forcing an estimated 300,000 displaced people to flee to Yola for refuge.

In his speech, Mr. Jonathan said he had a "heavy heart" from the "excesses" of Boko Haram. But rather than outlining a plan for defeating the Islamist radical militia, he devoted much of his speech to a lengthy complaint, claiming that his enemies were accusing him of deliberately bringing Boko Haram into Adamawa state for "political advantage." This, he said, was ridiculous because he already had lots of votes in Adamawa.

His opponent, Mr. Buhari, is a former army officer who ruled Nigeria for 20 months after a coup in the 1980s, heading a government that locked up journalists and ordered civil servants to perform "frog jumps" if they were late for work. Tall and thin, he still has a stiff military posture at the age of 72, and is seen as having an austere and uncorrupted lifestyle. His supporters are convinced that he can halt corruption, restore discipline to the military and crush the Boko Haram rebellion. His detractors claim that he still has a tyrant's tendencies, hidden in civilian clothes.

In an interview at the VIP lounge of Abuja's airport, while waiting to jet off to his latest campaign events, Mr. Buhari insisted he has changed. "Once upon a time, I was a military man, but I do not want to militarize democracy," he said. "We have to act within the Constitution of the country."

But when he's asked about his plan for defeating Boko Haram, he became as vague as Mr. Jonathan. He promised only to research the crisis. "The plan is, firstly, to understand the situation," he said. "Why is it possible for terrorists to be so successful in taking military installations? Why do hundreds of soldiers run away and let Boko Haram take it?"

As the election approaches, the campaign has turned increasingly nasty. Mr. Jonathan's supporters have attacked Mr. Buhari as a potential military dictator who could impose Islamic sharia law on the entire country. "Beware wolf in sheep's clothing," says a blaring headline in one recent advertisement by the Jonathan campaign. "Once a tyrant, always a tyrant," says another.

Mr. Jonathan's supporters have also portrayed his opponent as an elderly man who could die in office. "Enough of state burials," one advertisement says.

Mr. Jonathan's Vice-President, Namadi Sambo, openly ridicules Mr. Buhari for his age. "How many metres will he run before he falls?" he asked the crowd at the Yola rally. He described Mr. Buhari's military ideas as "suicidal."

The ruling party's advertising budget has seemed unlimited, with ubiquitous billboards and television commercials. But its slogans have been uninspiring. "Nigerians demand continuity," one poster declares.

Another advertisement claims Mr. Jonathan has "tripled" the size of the Nigerian economy – omitting mention that most of this increase was simply due to a statistical reassessment after decades of outdated numbers.

Mr. Buhari has been equally pugnacious in his jabs at his rival. In the interview this week, he said the Nigerian military has "collapsed" and "slid into anarchy" under Mr. Jonathan.

Observers and analysts say the election is tense and unpredictable, with a distinct risk of postelection violence. Mr. Jonathan's campaign team is "worried," according to a senior foreign diplomat here. "The campaign is much tighter than they expected." 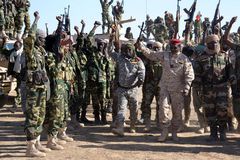 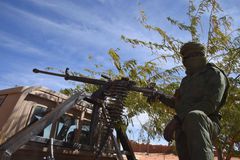 Opinion
The world is failing these refugee children
January 31, 2015 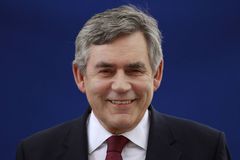 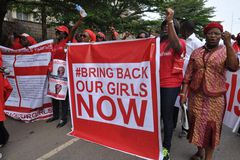 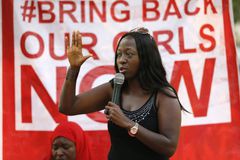