The ship is the length of three football fields, has 13 decks and has a gross tonnage of about 114,000, more than twice that of the Titanic. The Costa Concordia is, in effect, a small, steel-clad city – and it will have to be moved off a Mediterranean reef with all the delicacy of a mother shifting her sleeping baby.

The cruise ship went aground just off the island of Giglio, about 16 kilometres beyond Italy's Tuscan coast, on the evening of Jan. 13, 2012. Thirty passengers were confirmed dead. Another two are still officially listed as missing, their remains presumably within the shipwreck, making the Costa Concordia a tomb as well as the biggest and riskiest salvage operation in nautical history.

This weekend, the first anniversary of the disaster, there will be church masses, concerts and ceremonies in honour of the victims. On Sunday, at 9:45 p.m. – the moment of impact, when a rock ripped a 50-metre gash into the port side of the hull – 32 lanterns will be lit.

But the anniversary is not just all about remembering the dead and raging against the apparently incompetent captain, Francesco Schettino, who is under investigation for manslaughter in connection with the grave navigational error. The world's press and Giglio residents will also get an update from the salvage team about the risks of the $400-million (U.S.) salvage operation.

If it fails, Giglio, and the near-pristine waters around it, would face an environmental disaster.

Nothing like the Costa Concordia's salvage operation has ever been attempted. Raising a sunken ship, or cutting up or blowing up stranded ones, has been done so many times that it is virtually routine. Refloating the Costa Concordia is a different matter altogether.

The ship, just beyond the Port of Giglio, where disaster tourism has become the island's biggest money spinner, is two-thirds submerged, like an iceberg, on its starboard side. It sits precariously on a granite slope whose angle varies from 25 degrees to 45 degrees. Using cables the thickness of telephone poles, the ship has been stabilized.

Steel buoyancy tanks, some 11 storeys high, will be welded onto the port side, and a sub-sea steel bed bigger than a football pitch is being built on the ledge next to the hull. The weight of all the steel used in the salvage is equivalent to three Eiffel Towers.

If all goes well – some 400 engineers, drillers, divers and welders are working around the clock on the project – the ship will be rotated upright (know as "parbuckling") onto the steel bed some time in the early summer, after which another row of buoyancy tanks will be attached to the starboard side. The Costa Concordia will then be towed ever so slowly to Sicily, where it will take two years to break it down into scrap, ending the life of Italy's biggest cruise ship.

Nick Sloane, the salvage master from Florida's Titan Salvage, who was brought in from South Africa to oversee the ship's refloating, admits he's a bit nervous about the effort, in spite of the computer models that conclude it can work. He is especially worried about a freak storm. "The biggest threat is winter weather," he said in an interview this week. "Anything could happen if a 50-year storm hits."

And the odds of success? "I would say there's a 70-per-cent chance," he said, noting that once the rotation of the ship starts, it cannot be stopped. In other words, every person on Giglio will go into collective nervous spasm on salvage day.

Did the Costa Concordia tragedy change anything in the cruise industry?
November 2, 2012 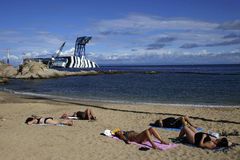 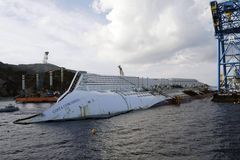 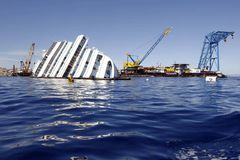