A treason charge against a Zambian opposition leader and the arrest of a Tanzanian rapper who criticized the government are the latest signs of rising authoritarianism in some of Africa's most strategically important countries.

While democracy has been expanding in West Africa in recent years, other regions of Africa are suffering a disturbing deterioration. Some of the worst setbacks have been in Zambia, Tanzania and the Democratic Republic of the Congo – three of the countries where Canadian companies are most heavily invested.

All three are witnessing a police crackdown on opposition voices, triggering fears that their leaders are becoming increasingly autocratic and intolerant of dissent. It is a worrisome trend for Canadian mining investors, which have sunk billions of dollars into the three countries.

In Zambia, the most popular opposition leader was arrested and jailed on treason charges this week after his convoy failed to make way for the motorcade of President Edgar Lungu on a narrow provincial road.

Hakainde Hichilema, who narrowly lost to Mr. Lungu in the past two presidential elections, was arrested in a late-night raid on Monday by dozens of police officers who fired tear gas and smashed through the front door of his family house. He remained in prison on Friday because Zambia has no provisions for bail on treason charges.

Mr. Hichilema and Mr. Lungu were heading to the same event last weekend when the presidential motorcade tried to pass the opposition leader's convoy on a narrow road. Video of the incident showed police vehicles veering dangerously toward the cars in Mr. Hichilema's convoy, trying to force them to the side of the road. They refused to pull over.

A senior police official accused Mr. Hichilema of trying to endanger the President's life by "disobeying police orders to give way." His political party, the United Party for National Development, denied that he had committed any offence.

Since his arrest, he has been denied access to medical care and lawyers, the UPND says. He is due to appear in court next week on the treason charges, which carry a minimum sentence of 15 years and a maximum sentence of death. Several of his supporters have also been arrested.

Until recently, Zambia had been lauded as one of Africa's most democratic countries, with free elections that often led to opposition victories. But over the past year, evidence has been growing of human-rights abuses, including a government decision to shut down a major independent newspaper. The opposition complained of vote-rigging in the presidential election last year. And this week, opposition activist Chilufya Tayali was arrested after a Facebook post in which he criticized the treason charges against Mr. Hichilema.

In Tanzania, fears of censorship and repression are growing after the police arrested journalists, bloggers, a local rapper and even ordinary citizens who made jokes about the President on social media.

The rap musician, Emmanuel Elibariki, was arrested after he released a new track in which he criticized President John Magufuli's government and asked: "Is there still freedom of expression in the country?"

The musician spent a night in jail and was released at the personal request of the President, who insisted that he liked the song. But just a few days earlier, Mr. Magufuli had warned the Tanzanian media to respect the limits on their freedom. "Be careful, watch it," he told media owners.

When he was elected in 2015, Mr. Magufuli was widely seen as a reformer and an anti-corruption campaigner. But he quickly fell into authoritarian habits. His government has banned political rallies, shut down several radio stations and newspapers and passed a law restricting the media and requiring journalists and bloggers to be registered.

In Congo, meanwhile, President Joseph Kabila is continuing to cling to power even though his legal term of office ended last December. Police have banned demonstrations and arrested dozens of people who tried to protest against the government this month.

Catholic bishops had mediated a power-sharing agreement between Mr. Kabila and the opposition in late December, requiring him to form a unity government with the opposition and to hold elections by the end of this year. But the agreement has fallen apart, and analysts do not expect any credible elections this year.

Mr. Kabila, who has ruled the country since 2001, has claimed that the government cannot afford to organize elections. The opposition says he has violated the December agreement by appointing his own candidate as prime minister. 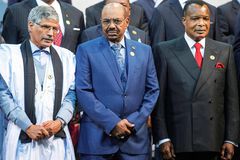