Crisis and deadlock: How Ukraine's political class is unravelling

A deputy from Ukrainian President Petro Poroshenko’s political party attacks Prime Minister Arseniy Yatsenyuk after presenting him with a bouquet of roses during the annual report of the government in the Ukrainian parliament in December 2015. The political crisis between president and prime minister is ongoing.

Street battles in the capital, a separatist war in the east and Russia grabbing the Crimea region. That was two years ago. Mark MacKinnon reports on how Ukraine's latest crisis involves its politicians

The pattern, by now, is all too familiar to Ukrainians. There's a revolution. The people celebrate. Then a new batch of politicians takes power and spoils it all.

The second anniversary of Ukraine's latest revolution passed last month in a familiar atmosphere of political crisis. President Petro Poroshenko and Prime Minister Arseniy Yatsenyuk – two leaders of the 2014 ouster of a pro-Russian government headed by Viktor Yanukovych – are at loggerheads, with Mr. Yatsenyuk fighting to hold onto his job and Mr. Poroshenko determined to replace him.

To Ukrainians who remember the Orange Revolution of 2004, it feels like a rerun. That revolt unravelled when its leaders, president Viktor Yushchenko and prime minister Yulia Tymoshenko, wasted their political capital fighting each other rather than reforming the country. That led to the rise of Mr. Yanukovych and a new era of Kiev's subordination to Moscow.

Also still remembered is how popular protests in Kiev helped to bring about the fall of the Soviet Union in 1991, only to see corrupt oligarchs take the place of the commissars.

The 2014 revolution was supposed to be different. This time, people died fighting to change their country. Russia's annexation of Crimea – and its support for separatists in the southeast of the country – made it clearer than ever how high the stakes were.

But the parliamentary coalition headed by the Petro Poroshenko Bloc and Mr. Yatsenyuk's People's Front has collapsed, with three smaller parties leaving the alliance last month after a failed attempt to oust Mr. Yatsenyuk. Meanwhile, the reforms they were elected to introduce remain largely unattended to.

The hated oligarchs still retain wide influence over business and politics in the country. The economy continues to stumble. A low-level war against Russian-backed separatists persists in the southeastern regions of Donetsk and Lugansk. And ordinary Ukrainians are left wondering just what it will take to set this country on a new and different course.

An anti-government protester holds a Ukranian flag as he advances through burning barricades in Kiev’s Independence Square on February 20, 2014. The protests led to the ousting of embattled pro-Russia Ukrainian President Victor Yanukovich.

New parliamentary elections are one way out of the current standoff, but with populist forces on the rise, neither Mr. Yatsenyuk, whose popularity ratings have fallen to the single digits, nor Mr. Poroshenko wants those right now, since they would probably result in an even more adversarial parliament. And so the two men are left arguing over whether Mr. Yatsenyuk needs to stand down, and if so, who should replace him.

This week began with rumours that Mr. Poroshenko, who controls the largest bloc in Ukraine's parliament, the Rada, was ready to back a new government of technocrats, with Finance Minister Natalie Jaresko moving into the prime minister's post. But while Ms. Jaresko – a U.S.-born economist who successfully lobbied Ukraine's 2015 bailout by the International Monetary Fund – would be a popular pick with many Western governments, she appears to lack support in the Rada and among ordinary Ukrainians, who know her best for raising energy tariffs, a condition of the IMF bailout, in the middle of winter.

By midweek, Mr. Poroshenko was floating the names of other potential candidates – including popular Lviv Mayor Andriy Sadovyi, who quickly rejected the idea, and Volodymyr Groysman, a political protégé of Mr. Poroshenko's – while Mr. Yatsenyuk was digging in for a fight, penning a sharply worded editorial in the English-language Kyiv Post that accused his political rivals of "backstabbing" and waging a "primitive race for power and seats."

Mr. Yatsenyuk's People's Front party controls the second-largest bloc of seats in the Rada, and Mr. Yatsenyuk has reportedly agreed to step aside only if he gets to name his successor and approve the new government's agenda.

"The chances they will find a solution to this crisis are not that big," said Taras Berezovets, a Kiev-based political consultant. "It's not that Yatsenyuk is not a good manager. The problem is that this is a coalition government with too many partners, too many oligarchs. This is a crisis of a lack of integrity, a lack of trust between ministers from different political parties. They do not work as a team."

Mr. Berezovets said a snap election would be a "nightmare" for the country, since it would see left- and right-wing populists gain seats at the expense of the Petro Poroshenko Bloc and the People's Front.

A poll released on Wednesday by the Kiev International Institute of Sociology showed that Ms. Tymoshenko's Fatherland party – which was decimated in the 2014 election – is now the most popular party in the country, with 20.5 per cent support. Second was the pro-Russian Opposition Bloc, with 12.1 per cent, followed by the leftist Radical Party, at 11.6 per cent.

The Globe in Ukraine

The Petro Poroshenko Bloc stood fifth, with 10.9 per cent, while the People's Front was almost a non-factor, with just 2.5 per cent support.

Dan Bilak, a Ukrainian-Canadian lawyer who has advised several Ukrainian governments, said the political crisis is proof that Ukraine's revolution is ongoing.

"We're in a transition. Everyone expected that we would get rid of Yanukovych and poof, happy days are here. But it doesn't work that way," he said. "All of this is actually very good. It's messy, it's ugly, but there's no easy way to kill an animal that needs to die. What we're witnessing is the death throes of the post-Soviet command administration system of government." 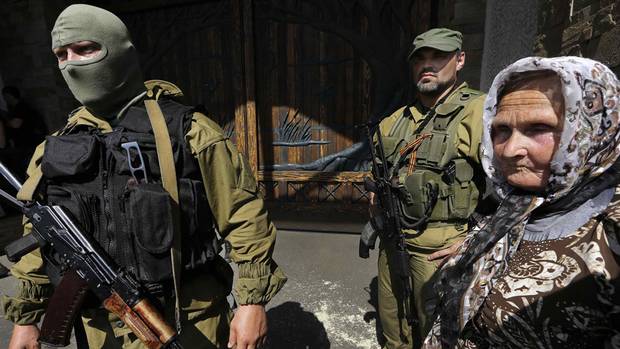 The GLOBE IN UKRAINE

Twelve stories that help explain the crisis in Ukraine

Read the articles
Follow Mark MacKinnon on Twitter @markmackinnon
Report an error Editorial code of conduct
Due to technical reasons, we have temporarily removed commenting from our articles. We hope to have this fixed soon. Thank you for your patience. If you are looking to give feedback on our new site, please send it along to feedback@globeandmail.com. If you want to write a letter to the editor, please forward to letters@globeandmail.com.
Comments