The elderly Indian anti-corruption activist Anna Hazare began the ninth day of his pledged "fast to the death" over anti-corruption legislation on Thursday. Thousands of people gathered at the Ramlila Grounds to support the 74-year-old, as they have each day, taking up a role in the pageant that has built up around Mr. Hazare: men charging five rupees to paint flags on cheeks, elderly ladies chanting their love for mother India, chic university students picking their way through the mud in suede sandals, hawkers with flags and key chains and the "I am Anna" hat (now a fashion statement), straight-backed retired soldiers holding placards and TV reporters hoarse from yelling over the cacophony of the crowd.

Mr. Hazare is fasting on a plinth at the head of a giant open area in the heart of the city, normally used to stage reenactments of the life of the god Rama. He is staging his hunger strike to try to force the government to adopt an anti-corruption bill drafted by him and his supporters, a law which would create the position of a lokpal, an ombudsperson with sweeping powers to investigate all levels of government. His team is in talks with government over some sort of compromise, as public opinion polarizes between those who feel he is the first man to challenge government and those who see his actions as blackmail that subverts democratic law-making. Mr. Hazare has reportedly lost 5.5 kilograms on his fast and is examined every few hours by a medical team of no fewer than 35 doctors. But when he emerged from a secluded enclosure to face the crowd in the late afternoon this week, he was sprightly and seemed chipper. His voice was strong as he thanked the crowd for coming and exhorted them to continue their struggle. Then he sat down cross-legged on a pile of pillows and began to clap along with one of the folk singers who belt out patriotic songs on the stage, one level below his for most of the day. Periodically he waved, beaming beatifically, and the crowd screamed back deliriously. He gazed out on a sea of T-shirts, masks and placards bearing his own face; there was plenty to nourish his ego, if not his body.

"I've come to fight against corruption and support Anna – physically, emotionally, financially, whatever it takes," said Sheela Verma, 45, who arrived at the Ramlila Ground with her sister. Ms. Verma recently took early retirement from the police; although many people at the protest complained that they have frequent interactions with corrupt police officers, she said she never saw any corrupt activity in her years on the Central Reserve Police Force. Ms. Verma said she has studied the anti-corruption bill put forward by the Hazare camp, and that tabled by government two weeks ago, and believes the "people's bill," as the former is now known, has stronger teeth.

Breakfast, lunch and dinner are served up free to the crowds, prepared by volunteers with donations from traders and store owners who support Mr. Hazare. They dish out more than 15,000 meals a day of yellow lentil dal, mixed vegetable, and puri, small rounds of deep-fried bread. The workers are normally employed by large catering companies in Delhi and cook for weddings. On Wednesday, the puri were being rolled out by a half-dozen children around the age of four, although the kids were hustled out of the scene when a foreign journalist arrived. Mukesh Kumar

Fasting as a means of non-violent protest has ancient roots in India, but was popularized by Mahatma Gandhi as a key technique in his campaign of civil disobedience against British colonial rule. It has remained popular with some activists ever since. A north Indian woman named Sharmila Chanu (popularly known as Iron Sharmila) has been fasting in jail in Manipur for more than a decade in an effort to force the government to lift the repressive Armed Forces (Special Powers) Act. This week the crowd at the Ramlila Ground heard from a few delegates from Manipur about her case, including routine force feeding in a prison hospital. Mr. Hazare's public hunger strike has drawn many other fasters to the heart of Delhi, hoping to ride his homespun coattails to attention for causes of their own. Raj Kumar, 37, is from the north Indian state of Jammu and Kashmir; he has used different forms of protest over the past five years to try to force an investigation into what he alleges is a case of corruption in the state government's hiring practices in Jammu. Five days ago, he came to the Ramlila Ground to fast near the base of Mr. Hazare's stage and says he will not eat until his petition is taken up by the Supreme Court.

Dr. Sanjeev Chhiber is a surgical oncologist who packed up his practice in south Delhi and came to work in the medical clinic at the edge of the Ramlila Grounds when Mr. Hazare began his fast here. Dr. Chhiber's team has treated 5,500 people so far, most of them for dehydration – although there have been 14 heart attacks, too. Dr. Chhiber has been a member of a grassroots group called India Against Corruption for more than a year; he says he believes this is the beginning of the new chapter for India. "If you think about 1917, with the Bolshevik Revolution, and 1949, with Mao – those revolutions also started with the middle class. This will change the course of Indian history," he says. Like many in the crowd, he argues passionately that the government must pass the version of the anti-corruption law put forward by Mr. Hazare's camp. "Right now the entire law-enforcement machinery is under the control of the executive and it's entirely corrupt – law enforcement has to be taken out of the ambit of the executive." In quiet moments in the medical tent, he likes to talk philosophy, quoting the works of Martin Heidegger and Immanuel Kant. "There are times when an idea emerges from the collective subconscious," he said, surveying the crowd. "And it captures a whole society."

Many of India's dozens of television news channels are broadcasting live, all day long, from the Ramlila Ground, in a dozen different languages. The media have been given pride of place on the grounds – a 50-metre square enclosure at the very front of the field, at the base of the stage where Mr. Hazare periodically emerges. The crowds press in on the media pen from all sides, waving, calling, mugging and pleading to be on camera.

Small sections of covered ground have been set aside near the front of the Ramlila Ground for older protesters, who are accorded great respect by the crowd. Amar Nath Jha, 73, is a farmer and a Hare Krishna from Bhopal in Madhya Pradesh, [he has top knot, red scarf]/note> while S. P. Gandhi, 64, is a teacher and farmer from Bhopal. [yellow homespun shirt]/note> Both men said they travelled to Delhi to spend their days at the protest and will stay as long as Mr. Hazare lasts. "There is corruption everywhere: [public clinic]doctors don't look at you unless you pay. I used all my savings to educate my son as an engineer but when the campus interviews [for admission]came, the only ones accepted were those who gave something to the teachers. My son did not get in, although he had very high marks," Mr. Gandhi said.

Corruption is not cured only by fasting
August 25, 2011 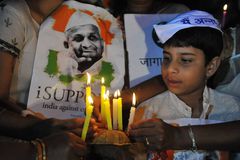 In photos: The frenzy around Anna Hazare
Gallery
August 25, 2011 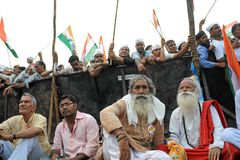 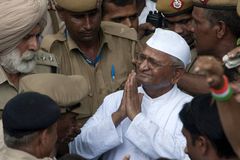 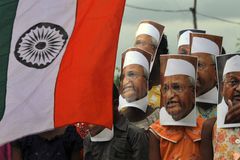 The Globe's Stephanie Nolen on a new deal for Hazare
August 18, 2011
Follow Stephanie Nolen on Twitter @snolen
Report an error Editorial code of conduct
Due to technical reasons, we have temporarily removed commenting from our articles. We hope to have this fixed soon. Thank you for your patience. If you are looking to give feedback on our new site, please send it along to feedback@globeandmail.com. If you want to write a letter to the editor, please forward to letters@globeandmail.com.
Comments