As the Italian coast guard suspended rescue operations at the wrecked Costa Concordia for fear that ship was dangerously unstable, the vessel's embattled captain admitted he made a navigational mistake that slammed the cruise liner onto the rocks. He also said he had fallen overboard as panicked passengers scrambled for their lives and did not intentionally abandon them.

In a leaked interrogation transcript that surfaced Wednesday night, Captain Francesco Schettino admitted to investigators that he went too close to the shore of the Tuscan island of Giglio.

"I was navigating by sight because I knew the depths well and I had done this manoeuvre three or four times," he reportedly said. "But this time I ordered the turn too late and I ended up in water that was too shallow."

Capt. Schettino, 52, had previously maintained he was not at fault in the deadly crash, insisting through his lawyer that he hit uncharted rocks and that his U-turn after the collision, to bring the ship as close as possible to Giglio island, had in fact saved "hundreds, if not thousands of lives."

Carnival, the Miami-based cruise line giant that owns the Costa Concordia, is blaming the tragedy wholly on Capt. Schettino. The company said he intentionally took the ship dangerously close to Giglio to "salute" the island's residents. Prosecutors called it a "reckless manoeuvre," one that probably will result in manslaughter charges.

It also emerged Wednesday that Capt. Schettino had taken the ship even closer to Giglio last August. The British maritime journal, Lloyds List Intelligence, said the ship came within 230 metres of the island on that voyage, "slightly closer to the shore than where it subsequently hit the rocks on Friday."

On Monday, Carnival's Italian subsidiary, Costa Cruises, admitted that the ship had altered course to get closer to Giglio, but that it never got closer than 500 metres from shore.

Also on Wednesday, Capt. Schettino was reported to have told investigators that he had no intention of leaving the ship Friday evening after it struck the submerged rocks, took on water, tilted and was rammed onto a submarine shelf next to the island.

According to Italy's La Repubblica newspaper, Capt. Schettino, who is now under house arrest, said he had tripped on deck as the ship listed, fell overboard and ended up tumbling into a life boat.

"The passengers were pouring onto the deck, taking the lifeboats by assault," he told investigators. "I didn't even have a life jacket because I had given it to one of the passengers. I was trying to get people into the boats in an orderly fashion. Suddenly, since the ship was 60- to 70-degree angle, I tripped and ended up in one of the boats. That's how I found myself there."

The revelation came a day after the release of a phone recording between the Italian coast guard and Capt. Schettino during which the captain made excuses to avoid returning to the ship to take control of the evacuation. Coast guard captain Gregorio de Falco shouted," Get back aboard, damn it!" Capt. Schettino, however, did not return on board.

Various reports said as many as 300 of the 4,200 passengers remained aboard the Costa Concordia when Capt. Schettino left the ship. So far, there are 11 confirmed deaths. Another 23 or 24 people among the passengers and crew remained unaccounted for.

The Italian news agency ANSA reported Wednesday that one of the missing passengers, a German woman, presented herself to the police in Germany.

One of the five bodies retrieved from the wreck on Tuesday was identified as Sandor Feher, a 38-year-old Hungarian violinist. He reportedly helped children put on life jackets. Wearing his own life jacket, he then returned to his cabin to retrieve his violin and never made it out.

Rescuers suspended their rescue operation on Wednesday morning after sensors determined that the 290-metre ship, one of the biggest of its kind in the Mediterranean cruising fleet, shifted slightly at about 8 a.m. even though the water was calm. The fear is that big waves could push the ship into deeper water.

The ship hit the rocks at 9:42 p.m. Friday. About 10 minutes later, Capt. Schettino turned the ship 180 degrees and drove it onto a 20-metre-deep ledge next to Giglio, where it eventually settled at a nearly horizontal angle.

The keel of the ship, however, is only about 30 metres from a near-vertical wall. If the Costa Concordia were to be pushed off by rough weather, it would be completely submerged in water 70 metres deep.

In an interview with the BBC on Wednesday from Giglio, Italian coast guard commander Cosimo Nicastro said that rescue divers cannot enter the ship as long as it is potentially unstable. The initial plan on Wednesday was to blow more holes into the vessel's starboard side – the side tilted toward the island – to search for missing passengers.

He admitted that "after several days, hopes of finding someone alive are low."

The focus is now shifting to salvage operations, the first goal of which is to remove 2,300 tonnes of fuel oil from the ship's 20 or so tanks. The effort could take two weeks or longer. Failure to drain the oil threatens to pollute one of the cleanest and most picturesque stretches of the Italian coast. To remove the oil, salt water will be pumped into the tanks, forcing the lighter oil to the top where it can be siphoned off.

The cowardice of Captain Schettino
January 17, 2012 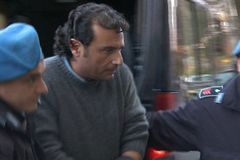 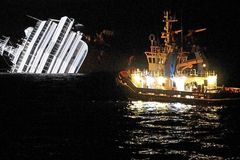 Italy releases names of those missing from capsized ship
January 18, 2012