As the President's motorcade passed slowly through Colombo Monday, 20-year-old university student Chaturi Waidyasekera pressed her head to the ground, then rose and chanted, "Praise our king!"

Dozens of others did the same, beneath billboards that pictured Sri Lankan President Mahinda Rajapaksa in the white robes of a Buddhist deity. Ms. Waidyasekera explained, calmly, that she believes the elected leader of Sri Lanka should remain in office for life because last week he ended a 26-year civil war with the violent defeat of the Tamil Tigers.

"For once in our history we have a leader who has made our island into one kingdom," she said. "Why do we need elections any more? He is the king we need." She was actually one of the more moderate voices along the route: For others, the President was nothing less than a living god.

After the Liberation Tigers of Tamil Eelam were defeated last week, it seemed like this was simply a victory celebration, a mass depressurizing of a people made tense by years of war. Members of Sri Lanka's majority, Sinhalese-speaking Buddhists, took to the streets in a celebration that lasted days.

But in the days since, it has evolved into something larger. Over the weekend, huge statues of the President began appearing along the pitted two-lane highways that cross the island. In the cities, large billboards and posters are placed on every block, showing the President in white robes, or in fatigues, hugging his brother, Gotabaya, the Defence Secretary. (His other brother, Chamal, is Ports and Aviation Minister.) At first, they carried slogans like "Mission Accomplished." But now new ones have begun to appear, reading "King Mahinda Rajapaksa: Our saviour." It is impossible to avoid them: They are on every street corner, every public building, every shop front.

On state television, an advertisement seems to run several times every hour in which a woman sings, over utopian scenes of loyal workers, that the President has saved the nation and deserves to be crowned king.

"The messaging has been singularly Buddhist in its nature and expression," says Sanjana Hattotuwa, a democracy activist with the Centre for Policy Alternatives in Colombo.

"The defeat of the LTTE is being portrayed as the establishment of one country along the lines of the Sinhala kingdoms of old times, with the deification of the President as a religious king, and the victory of the army as an event foretold in the Mahawansa, the Sinhala Buddhist historical chronicle."

All of this is deeply alarming for the Tamil-speaking, mainly Hindu minority, who represent 13 per cent of the population, or about two million people, and whose language, religion and mythologies have been notably absent from Mr. Rajapaksa's grandiose moment.

While he did deliver a few phrases of well-practised Tamil in a speech to parliament - probably the first time any Sri Lankan leader has done so since independence from British rule in 1948 - he has subsequently delivered addresses in which he has said the country will be rebuilt in "Buddhist values," and declared that there will be "no more minorities," a phrase meant to promote universal values, his supporters say, but which Tamils see as another declaration of Buddhist superiority.

Never before has a leader of this traditionally mild-mannered democracy adopted such a regal stature, and never before have the people seemed so willing to deify a leader. This is a country, after all, whose founders, memorialized in statues in Colombo's Independence Square, are lawyers in business suits.

Larger-than-life figures have figured in this island's politics, but the stakes have always been partisan and the dramas have usually been of the operatic, and sometimes soap-operatic, variety, such as the long-running feud between president Chandrika Kumaratunga and prime minister Ranil Wickremesinghe, which paralyzed the legislature until Mr. Rajapaksa won the presidency in 2006.

Since his election, Mr. Rajapaksa has seen the opposition parties wither and fragment, leaving him with a hold on power that could last for years, even decades. At the same time, he has aligned Sri Lanka away from the United States, Britain and Europe - which initially supported his unyielding approach to defeating the Tigers but then backed away - and toward China, Russia, Japan and Iran, which have supported and armed his struggle.

In the years before his election, you had to travel to the island's LTTE-controlled north to see a full-scale cult of personality, with images of the leader, Velupillai Prabhakaran, on every wall and a population revering him as a godlike figure. Today, that has become the style of politics in the south. Along with it has come a quick and sometimes total condemnation of anyone who dares question the execution of the war.

"It seems to be true what they say, that you have to become something in order to defeat it," Mr. Hattotuwa says. "This deification is of an unprecedented degree, it is absolute. The commander-in-chief has unprecedented social and political support across the country. This is beyond politics, it is religion and mythology." 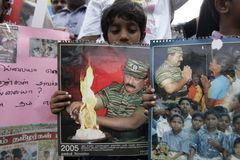 Follow Doug Saunders on Twitter @dougsaunders
Report an error
Due to technical reasons, we have temporarily removed commenting from our articles. We hope to have this fixed soon. Thank you for your patience. If you are looking to give feedback on our new site, please send it along to feedback@globeandmail.com. If you want to write a letter to the editor, please forward to letters@globeandmail.com.
Comments