Damascus saw a barrage of violence Thursday with car bombs and mortar attacks striking across the city on a scale not seen in the Syrian capital before now.

Syrian state television said at least 53 civilians were killed and more than 200 injured in a car-bomb blast at a government checkpoint close to the Russian embassy and offices of the ruling Baath party in the city centre on Thursday morning. Children were reported among the casualties.

"It does seem that central Damascus, having remained on the sidelines for so long, now faces being drawn into the battle," said Julien Barnes-Dacey, a senior policy fellow at the European Council on Foreign Relations in London and a former Damascus-based journalist.

Mortar rounds fell on civilian buildings and a hospital in an upscale district of western Damascus, Thursday night.

"Shells fell within 20 metres of my house over a period of several hours," Jean Pierre Duthion, a French expat who lives in the area, told The Globe.

The attacks, believed to have been carried out by regime opponents from a variety of backgrounds and ideologies, see the government facing the most serious assault on Damascus, the country's most important power base. But rebels fighting to overthrow the Syrian regime are still a long way from controlling the capital outright. The government's widespread security presence has restricted fighters to outlying districts of the city, areas long since abandoned by civilians.

Thursday's bombing and mortar attacks suggest that instead of trying a major assault, rebel fighters are resorting to guerrilla tactics to loosen President Bashar al-Assad's grip on the heavily fortified capital.

To defend the capital, Mr. al-Assad is using his most reliable troops, activists say, including the Republican Guard and the feared 4th Division, commanded by his brother, Maher. Armed checkpoints have sprung up across the city as part of the regime's efforts to keep the rebels at bay.

The National Coalition, the main Syrian umbrella group for the opposition, denounced Thursday's car bombing, without accusing a specific group of carrying it out. It said in a statement posted on Facebook: "Any acts targeting civilians with murder or human-rights violations are criminal acts that must be condemned, regardless of the perpetrator or the justification."

Opposition leaders have blamed the Syrian regime for carrying out similar bombings in the past.

Responsibility for the car-bomb blast – which Syrian state media called a suicide attack – is not yet known, though the government blamed "al-Qaeda-linked armed terrorist groups" and Jabhat al-Nusra, a Salafist rebel group.

Jabhat al-Nusra has claimed responsibility for suicide attacks against regime targets in Damascus, Aleppo and elsewhere over the past year and experts say it is usually several days before the group claims responsibility.

"If the attack becomes known for killing children then I'm not sure even Jabhat al-Nusra – if they are actually responsible – would claim it," said Aron Lund, a researcher of Syrian jihadi groups at the Swedish Institute for International Affairs.

Both Free Syrian Army-affiliated groups and Jabhat al-Nusra have admitted to carrying out bombing attacks during the conflict, though the FSA has said it only attacks government targets. FSA fighters more commonly use mortars and light weapons in battles with government forces.

Bombings in Damascus over the past 14 months have killed civilians as well as government security and military forces and Damascenes, particularly those living in the wealthy areas where Thursday's mortars fell, are unlikely to embrace the rebels.

The regime offers security to most of the middle- and upper-income neighborhoods in Damascus, believes Joshua Landis, the author of SyriaComment, a popular blog. "But once people who live in relative security, such as the middle-class urbanites, are forced from their comfort they have nowhere to go but to their confession," he said, referring to their religious affiliation.

"People will have to find a militia that can protect them. It makes them available for recruitment by the opposition." 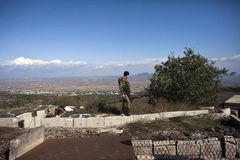