It was a little after 10 p.m. Saturday when a convoy of pickup trucks carrying balaclava-clad men rolled up to a roadblock near Torex Gold's mine in Mexico's Guerrero state. As part of a wildcat strike, workers at the Canadian-owned operation had cut its water supply and were barricading a dirt road leading to the wells.

The attackers opened fire with assault rifles and shotguns, miners told The Globe and Mail in interviews at the scene, chased the protesters into the surrounding scrubland and beat them up. When the shooting stopped, two men lay dead: Brothers Victor and Marcelino Sahuanitla Pena. Locals said the pair had worked delivering diesel to the mine and were manning the blockade that night.

What exactly caused the violence is a matter of dispute. The protesters blame their trade union, the Confederacion de Trabajadores de Mexico (CTM), which they accuse of being too close to Torex and dealing with the company behind their backs. Some miners have been trying to leave the CTM to join a more independent union, Los Mineros. State authorities, meanwhile, contend the carnage was actually a fight between two rival militias that had nothing to do with the strike.

As the bloody episode unfolded in the rugged mountains near a village named Atzcala, negotiators from Canada, the United States and Mexico were gathered at a luxury hotel 240 kilometres to the north in Mexico City, trying to hash out an overhaul of the North American free-trade agreement.

Canadian negotiators have demanded the pact's labour standards be toughened, making it easier for Mexican workers to join unions of their choice and doing away with so-called "employer protection contracts" – deals negotiated between unions and corporations without the involvement of workers that are a common occurrence at CTM-represented workplaces in Mexico.

Whatever the truth of the Sahuanitla brothers' deaths, the timing shone a spotlight on accusations that Canadian and American companies are using the trade pact, combined with lax Mexican labour standards, to exploit the citizens of their southern neighbour.

Standing at the blockade at dusk three days after the killings – the spots where the men fell marked by a pylon and a car tire, each adorned with candles – Torex workers and other locals rhymed off a list of complaints. They accused the company of underpaying them, thwarting their efforts to join an independent union, reneging on pledges to improve the community and not compensating the village for much of the water the mine was using.

"They promised work for all, that the roads would be paved, that families would have decent housing," said Hedilberto Peralta Fabian, who identified himself as an area commissario, roughly equivalent to a town councillor. "Nothing."

Toronto-based Torex Gold and the Guerrero attorney-general's office contended there was no connection between the killings and the labour dispute. The company described the strike as an "illegal blockade" by 15 per cent of employees who had shut down the operation since Nov. 3.

"We can only imagine how painful this process has already been for the families of these men, aside from having their deaths used for political grandstanding," Gabriela Sanchez, the company's vice-president of investor relations, wrote in an e-mail.

Ms. Sanchez said the men killed were not directly employed by the company, but that one ran a business that leased equipment to a mine contractor. She said Torex has been paying the Mexican federal government for the use of water at the mine and is not in arrears. Ms. Sanchez said her company is an "attractive local employer," whose pay is good by Mexican standards.

She said the company had built new houses for 170 families in the area, paved some roads, refurbished a health centre and a school, and that more than half of the mine's work force is made up of locals.

"Our wages are above average for the mining sector in Mexico, our employees have good benefits and we are heavily engaged in the economic development and improvement of the communities that we work with," she wrote. "We listen to our communities and consider their requests for further assistance. Unfortunately, we are not always able to provide the additional services and infrastructure they request."

The leader of the Guerrero branch of the CTM did not respond to a request for comment. A person who answered the telephone at the union's Mexico City headquarters said no one was able to answer The Globe's questions.

Roberto Alvarez Heredia, a state government spokesman, said the Sahuanitlas were killed in a fight between two armed groups that acted as local police forces. "When both groups that were carrying firearms met, a dispute arose, which led to the murder of two people," he wrote in a statement posted to Facebook.

Miners at the site, however, insisted they were unarmed when the attack happened. They rejected any suggestion the violence was separate from the dispute with Torex. When told that the company was saying the attack was unconnected to the strike, they broke into a chorus of "No."

"We know what happened," Oscar Garrido Ontiveros said. "We don't want to take it any more. Two people got killed and that's enough."

Torex's Atzcala-area projects, which include one working mine and two others under development, are the main industry in this rural region. Bulls wander down the country roads, which, like the rock in the surrounding mountains, are a champagne gold colour, emitting a pale dust that coats the thick green underbrush.

Daniel Garrido said he didn't even know he was a member of CTM for two years, so divorced is the union from its members. "They're not doing anything for us. It's the opposite. If we bring in another union, they want to fire us. We've received a lot of threats."

Several protesters showed The Globe their pay stubs, with net pay ranging from 978 to 3,102 pesos per week – roughly $67 to $212. Local officials said the company is also two years behind paying its water bill.

Kimberly Nolan Garcia, a labour expert at the Centre for Research and Teaching in Economics in Mexico City, said the dispute at Torex Gold's mine is common in Mexico. The CTM, which is close to the country's governing party, is often accused of signing protection agreements with companies and intimidating members who want to join rival unions.

"It's a problem in Mexico where a union will be assigned to a factory without consulting the workers," Prof. Nolan Garcia said in an interview. "These sort of sweetheart deals are endemic to the Mexican labour-relations system."

Ms. Sanchez, the Torex vice-president, confirmed her company "engaged CTM" before hiring workers. But she vowed Torex would accept a different union if the workers chose one.

The leader of Canada's largest private-sector union, Jerry Dias, said Canada will not agree to a revamped NAFTA unless it contains stronger protections for workers' rights. The Unifor president, who was in Mexico City advising the Canadian negotiating team, visited the Torex site to deliver this message to the miners.

"We have proposed to eliminate the CTM in Mexico, eliminate protection agreements and to have free unions," he told a crowd of workers at the site of the shooting, to shouts of "gracias!" and applause. "We are here to make sure that your struggle is our struggle and we fight this together."

Whether the proposals will come to anything is still an open question. The mood this week at the Camino Real Polanco hotel – where negotiators indulged in designer cocktails and wagyu beef – was decidedly downbeat as discussions deadlocked over President Donald Trump's efforts to bring in new protectionist measures to favour U.S. corporations over foreign competitors.

In Atazcala, the protesters said they were tired of waiting for things to get better.

"We're living like this," one woman, who said she works as a cleaner for Torex, gestured toward a corrugated metal shack in the village. "Meanwhile, they get rich."

Opinion
After NAFTA comes the politics of uncertainty
November 25, 2017 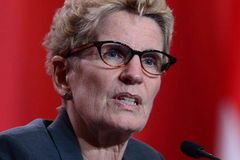 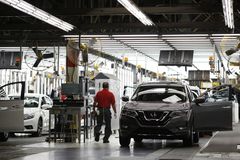