When Malaysia's prime minister spoke to television cameras early Thursday morning, he answered one question among the many about missing Malaysia Airlines Flight 370: a piece of one of its wings did, he said, wash up on an island in the southwestern Indian Ocean.

It has been "conclusively confirmed that the aircraft debris found on Réunion Island is indeed from MH370," the prime minister, Najib Razak, said. Malaysia Airlines called it a "major breakthrough."

But though it represents one of the sole glimmers of hope toward finding the Boeing-777 that is the object of the largest aviation search in history, the discovery of a single piece of wreckage does little to unravel the mystery of how a modern jetliner could have so thoroughly disappeared for more than 500 days.

As if to underscore the uncertainty, French authorities testing the flaperon, a wing control surface, were far more circumspect in describing it, with a public prosecutor saying only there is a "very high probability" it came from the missing airplane. And conflicting reports on the discovery of new wreckage added further confusion: on Thursday afternoon, a Malaysian official told Agence France-Presse that airplane window panes and seat cushions had been found on Réunion, while Australian search authorities said no debris located there appeared to be related to an aircraft.

More detail may emerge in coming days, as French investigators continue scrutinizing the flaperon part for signs of wear and deformation, looking for clues to how it became detached from the aircraft or the speed at which it hit the water.

But a single piece of an aircraft's exterior offers scant hope of delivering real insight into why an immensely complex machine turned off its transponder, abruptly left its flight path and ended up somewhere in the vast emptiness of the Indian Ocean, rather than flying from Kuala Lumpur to Beijing.

"You're not likely to find anything on this part, to be honest with you," said John Page, an aircraft designer and researcher at the University of New South Wales school of manufacturing who has served as an expert witness on aviation disasters.

Certain air-filled pieces of an aircraft, like a flaperon, are expected to float. Discovering such a part "would indicate that it either broke up in the air or in the water – but it doesn't actually tell you which," Mr. Page said. "It does tell you the airplane is broken."

It also confirms that the aircraft ended up in the Indian Ocean, contradicting popular theories that it had instead travelled north, perhaps to Russian-controlled territory. And it suggests that vessels conducting a massive marine search off Australia's northwest coast are in the right place. Oceanographers have said currents can be expected to deliver a floating object from the search area to Réunion, a French island about 750 kilometres east of Madagascar – and 5,700 kilometres from Kuala Lumpur.

The flaperon, found July 29, "does seem to indicate that the plane did come down, more or less where we thought it did," Australian Prime Minister Tony Abbott said Thursday. "And it suggests that for the first time we might be a little bit closer to solving this baffling mystery."

In China, however, the discovery did little to quell rampant rumours of what happened. Instead, it prompted new speculation among grieving family members unwilling to accept that loved ones are gone. More than half of the 239 on board the plane were Chinese.

"Who can prove that the plane didn't stop somewhere on the way to unload people before going on to fly into the sea?" said Bian Lianwei, whose brother was on Flight 370. He also pointed to Malaysia Airlines Flight 17, which crashed in Ukraine after being hit by what investigators believe was a surface-to-air missile. That, too, was a Boeing-777, and he raised the possibility a part from Ukraine had been planted in waters near Réunion. "Isn't it possible debris from that plane was thrown into the sea?" he asked.

Distrust among families has run so deep that, to dispel fears, Motley Rice, a U.S. law firm with a specialty in aviation disasters, checked aftermarket and black market sellers to see if any Boeing-777 flaperon parts were for sale. "And there really aren't," said Mary Schiavo, a former U.S. Department of Transportation Inspector General who leads the firm's aviation practice. That "should put to rest the idea that somebody put the part into the ocean," she said.

What it won't do is help the legal case for families seeking compensation. A piece of wing "really doesn't answer any question of what happened, what went wrong – was it a malfunction, was it batteries burning in a cargo hold, was it a rapid decompression, a hijacking or terrorist event?" Ms. Schiavo said. "None of those have been answered, and those bear on any legal claims the families have," including who should be the target of legal action.

Nor does the discovered part lessen the pain for families – or their anger.

"When I read the news this morning, I resented China, my own country, even more," said Mr. Bian. He faulted Chinese authorities for inaction, questioning how a large passenger aircraft could have gone missing in heavily-monitored airspace – a question that remains unanswered by any of the governments with military interests and radar in the area.

"With no information on where the plane went to, every day is suffering," Mr. Bian said.

Wang Yongzhi, whose wife was on the plane, still insists he will one day see her or her body.

"It's been 515 days," he said. "How can everyone go back to peace and quiet without the truth being found?"

The Chinese government, for its part, offered its "deep condolences" to families, and on Thursday called on Malaysia to "carry out their promises and continue investigating the reason for the plane accident."

Australia and Malaysia have already spent $110-million on a massive marine search. It is expected to take another year to complete, with an ultimate cost likely to exceed $150-million – a heavy financial toll that has raised questions about the value of continuing, even among experts.

"The loss of a Boeing-777 is very unusual," said Mr. Page, the Australian researcher. "So if it's very unusual, how much money do you spend trying to find out what happened?"

Even the flying public is often less single-minded about safety than is commonly assumed, he said. He once surveyed passengers to ask how much they would pay to switch from a worse airline to a better-respected, and safer, carrier like Qantas. They said $100 for a long-haul Europe flight.

He then asked how much they would pay for more leg room on that same flight. The answer: $250.

- With reporting by Yu Mei 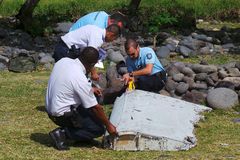