After an opposition boycott and sporadic violence that left thousands of polling stations empty on voting day, Kenya must grapple with the aftermath of a disputed election that leaves the country badly divided, with a President whose expected victory will be tainted.

Election officials first claimed that 48 per cent of Kenyan voters had participated, and then later acknowledged that less than 35 per cent had voted – down dramatically from 79 per cent in August when Kenya held its previous election, which was later nullified by the courts.

The boycott, reinforced by thuggish tactics from some opposition supporters, persuaded the election commission to postpone the voting in four opposition strongholds in western Kenya, citing "security challenges." Those regions will vote again on Saturday.

At least four people were killed and many others injured in clashes between police and protesters throughout the day on Thursday. Millions of Kenyans voted, but millions stayed home, respecting the boycott or simply unable to vote because of opposition tactics.

The commission said more than 35,500 polling stations opened during Thursday's election, but about 5,320 did not open. This left large chunks of the country effectively disenfranchised, inflicting further damage on the election's validity.

When the results are officially announced next week, President Uhuru Kenyatta is likely to be re-elected by a big majority. He held a huge advantage in the preliminary results released from thousands of voting stations on Thursday night.

But the legitimacy of his mandate will be severely jeopardized by the low turnout, multiple court challenges, violent attacks on election staff, threats against judges, the resignation of an election commissioner and a heavy-handed police crackdown. The independence of Kenya's judiciary and electoral institutions is now under serious question, pushing it closer to the spectre of authoritarian rule.

Less than two months ago, Kenya had seemed on the brink of a democratic breakthrough. In an unprecedented move, its Supreme Court had nullified an August election, citing a range of illegalities and irregularities. It ordered a new election, and Kenya's election commission had promised a fairer vote. It was a dramatic advance for the freedom of courts and elections in one of Africa's biggest democracies.

One of the biggest fears has been the danger of postelection violence. As many as 1,500 people were killed in violent clashes and murders in the weeks after the 2007 election. But Kenya's police have a much tighter grip on the country this time. Almost all of the estimated 43 deaths since August have been inflicted by the police themselves.

The bigger issue may be the deterioration of human rights and freedom in a crucial African country. Kenya is one of Africa's biggest economic powers and one of its leading democracies, yet there are disturbing signs that it is sliding closer to autocracy.

In one of the most shocking threats to the independence of the courts, unknown gunmen shot and wounded the bodyguard of Kenya's deputy chief justice on Tuesday. The following day, most of the Supreme Court judges failed to show up at a scheduled hearing on a petition to delay the election. It was an implicit admission that it was too risky for the judges to deal with the issue. Lacking a quorum, the court was unable to rule on the petition.

"We are deeply disappointed by the continuing efforts of both parties to interfere with and undermine the independent operation of the electoral commission, the judiciary and other essential institutions," said a statement on Wednesday by 15 ambassadors and other heads of mission from Europe and North America, including Canadian High Commissioner Sara Hradecky.

They said they viewed the situation with "profound sadness." They called for dialogue immediately after the election to resolve the "deep divisions that the electoral process has exacerbated."

The European Union and the Carter Center, a U.S.-based non-governmental organization, which were in Kenya to monitor the voting, announced that they would reduce their monitoring missions because of the election tensions. In some regions, the election commission was unable to train its staff because of threats and harassment. But the commission, under pressure from Mr. Kenyatta's forces, pushed ahead with the vote.

This set the stage for scenes of chaos and confusion Thursday on voting day. Gangs of young men, supporting Mr. Odinga, blocked the entrances to some voting stations, throwing rocks or wielding clubs, while police fired tear gas to try to disperse them.

At one polling station, the opposition supporters welded the gate shut. At others, the ballot material was blocked, or the electoral agents did not show up, fearing for their safety.

Other stations were simply left empty as voters stayed away. At many stations, dozens of election officials sat idle for the whole day, waiting for voters who never came.

The tensions were worsened by ethnic differences between Mr. Kenyatta's supporters and those backing Mr. Odinga, leaving a dangerous legacy from the election.

In another sign of the escalating tensions, MPs from the two main parties erupted into fistfights at a Nairobi hotel after the polls closed on Thursday. They began brawling on live national television after they showed up at the same hotel for separate press conferences. 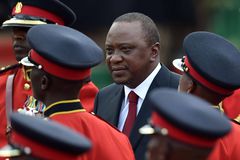 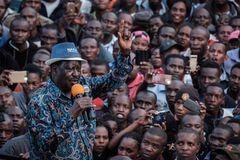 Kenyan opposition leader urges supporters to boycott election rerun
October 25, 2017
Follow Geoffrey York on Twitter @geoffreyyork
Report an error Editorial code of conduct
Due to technical reasons, we have temporarily removed commenting from our articles. We hope to have this fixed soon. Thank you for your patience. If you are looking to give feedback on our new site, please send it along to feedback@globeandmail.com. If you want to write a letter to the editor, please forward to letters@globeandmail.com.
Comments