Bettina Malter's only memory of the historic events of Nov. 9, 1989, consists of being stuck in a traffic jam. The day after the Berlin Wall fell, her parents piled her into a car for the trip to West Berlin, their first in almost 30 years, convinced the border would not remain open for long. That day also happened to be her fifth birthday – and she remembers feeling irked at the delay in returning home for a family celebration.

The years that followed were disorienting ones for her parents. Her mother went from designing breweries to selling insurance. Her father, an engineer, had to start all over again at the bottom rung of his profession.

For Ms. Malter, now 29, the unease came later, during her time at graduate school in Western Germany. When her classmates mourned the death of a cherished children's book author, Ms. Malter had no idea who he was. When she asked about a certain public holiday, she got blank looks. Many of the parents of her friends had participated in the protests that swept Western Europe in 1968; Ms. Malter had to learn about them in a book.

The collective memory in reunified Germany, she realized, was a West German one, with no place for experiences like hers.

Meanwhile, her friends insisted that the differences between East and West Germany were in the past.

One confessed to Ms. Malter that she was annoyed with her for bringing them up. "She said, 'It's finished, we're done, we're all the same,'" recalled Ms. Malter, a freelance writer.

Sitting in a café in Berlin, Ms. Malter allowed herself a small smile. "I don't want the Wall back," she said. "But we have a problem and we have to talk about it."

On Sunday, a quarter-century will have passed since the fall of the Berlin Wall, the defining symbol of the Cold War and a barrier that imprisoned millions of Germans. Today the physical boundary is gone, sometimes to the point that it's hard to find where exactly it was. In its place is a flourishing city where moving from one part to the other is seamless.

Yet 25 years later, differences persist across the line that once divided Germany. Much of the attention has focused on socio-economic disparities. But there are also tenacious divisions in attitudes and behaviour, a phenomenon that is sometimes described as a "Mauer im Kopf" – a wall in the head.

A recent poll of Berliners by the Hertie School of Governance here showed both progress and a persistent gulf. A third of those surveyed said there was no difference between those in the East and the West, an increase from five years ago. But nearly half of the respondents said they had little contact with people from the other side. In 2012, a newspaper survey showed that one in five Germans from the former West had never visited the East.

Such results tap into lingering discontent on both sides. Many former East Germans feel that their country was not so much unified as subsumed into West Germany, in more of a takeover than a merger. In what was once West Germany, meanwhile, there is resentment at the cost of reunification and the perceived complaining by their eastern brethren.

"Many East Germans still feel alien in the reunified Germany, which has taken over the institutions and values of the old Federal Republic," said Klaus Schroeder, a political scientist and sociologist at the Free University in Berlin. "Even if only a small minority of about 10 per cent to 12 per cent of the East German population wants to have the GDR back, a large majority feels strange in a united Germany."

Prejudices have proven hard to shake. Among westerners, there is a stereotype of easterners as "anxious, suspicious and dissatisfied," while easterners sometimes typecast westerners as "arrogant, superficial and greedy," Prof. Schroeder said.

In recent years, younger eastern Germans like Ms. Malter have grown more vocal about articulating the impact of this psychological divide. There's even a new group – Third Generation East – whose aim is to highlight the experience of young people born in the years before the Wall fell, an experience they say has been forgotten.

The growing voice of this generation – people who experienced life in East Germany but weren't old enough to be involved in its repressive institutions – marks a new development on the road to reconciliation. It shows how much has been achieved in the past 25 years and how much remains to be done.

Jessica Lippert, 30, and Alexander Kaiser, 29, like to say they are their own favourite example of German reunification: he grew up in Lichtenberg, in East Berlin, while she grew up in Wilmersdorf, in West Berlin. They met in 2007 and have a young son.

Their childhoods were radically different. Ms. Lippert remembers watching Walt Disney movies, drinking Coca-Cola and going on holidays to Spain and Italy. Mr. Kaiser, by contrast, says his family didn't have a phone in their own apartment until 1996. Vacations were mostly consisted of camping trips. But he remembers being surrounded by a "bubble of love" and a close-knit community.

Ms. Lippert's parents didn't like the economic costs of reunifying Germany and never lost their aversion for the eastern part of the city. Even today, she says, her mother rarely visits the couple's home in the former East Berlin. Her parents "have the Wall in their mind," said Ms. Lippert. For them, the East is inferior, an ugly place full of high-rise Cold War-era apartment blocks, she said.

The couple said they don't delve into such prejudices with their parents. Mr. Kaiser's mother, for her part, says westerners spend a lot of money and don't know how to work.

Their hope is that their son Felix will grow up without the stereotypes and prejudices of prior generations. They know at least six couples like them, who combine East and West German backgrounds. "Our generation is the first that has the chance to be mixed," said Ms. Lippert.

'It's okay to be different'

When Johannes Staemmler was born in 1982, the city of Dresden was mocked as out of touch, even within East Germany. It was called the "valley of the clueless," a reference to the geography that prevented the city from receiving television signals from the West.

After the fall of the Berlin Wall, he remembers that his biggest fear was that his family would be the last one he knew to still drive a Trabant – the small, boxy sedan once ubiquitous on East German streets.

Later Mr. Staemmler earned a doctorate in Berlin. For a long time, he said, he tried "not to be East German." He would disguise his distinctive accent that marked him as being from Saxony. "There was this feeling of being different, but not being allowed to be different," he recalled.

A few years ago, he became involved with Third Generation East, which was created by East Germans born between 1975 and 1985. He co-edited a volume of essays bearing the group's name that appeared in 2012 with the subtitle: "Who we are and what we want."

The group's exploration of the past and what it meant to them wasn't a hit with their parents. Many were sick of talking about life in East Germany or didn't want to dredge up difficult topics, said Mr. Staemmler, now a senior researcher at Stifterverband, a Berlin think tank.

Some wondered if Third Generation East would turn into a political movement, though that hasn't happened. But Mr. Staemmler is proud of what it has achieved. "We established a place where it was okay to be different," he said.

Germany was divided for 45 years, notes Prof. Schroeder. During that era, people lived in "different and even contradictory systems." It will probably take the same amount of time for the two sides to grow toward each other, he surmised. Then, the differences between East and West will be more similar to regional differences, such as those between northern and southern Germany today.

"Until then, we should accept that the other side is not alien, but different," he said. "We can live with this plurality."

For Ms. Malter, the freelance writer, one heartening sign is the new self-confidence she sees among her peers. They're no longer ashamed of their East German background or attempt to hide it. On Sunday evening, she will be among the crowds of Berliners who will gather to see luminescent balloons set aloft along the former path of the wall.

"I just want to walk around," she says. "I'm really excited to see it." 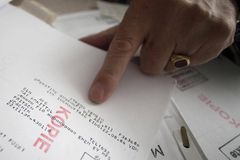 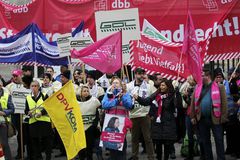 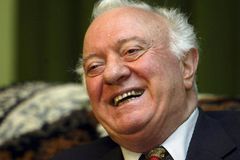