Inside the low-ceilinged main room of the Elks Lodge in Salem, Bill Frisone and Billy Strules slide into a row of seats to await their first-ever political event. Mr. Strules, a 58-year-old building contractor, can't remember the last time he voted in any election. "We're the least political people in the world," adds Mr. Frisone, 52.

Yet the two men, best friends for four decades, made sure to be here on Monday morning for only one reason: Donald Trump. It's the first time in their lives that they identify with a candidate enough to support him in person and to make sure they're registered to vote.

"He's finally talking about the things that got swept under the carpet," Mr. Strules says. Things like kicking people off welfare and getting them back to work, or shutting the country's borders to illegal immigrants, he says.

One of the defining features of the primary race is the way that certain candidates are making inroads with voters who long ago gave up on the electoral process. On the Republican side, Mr. Trump has tapped into a group of disaffected citizens who skew Republican. On the Democratic side, Vermont Senator Bernie Sanders is accomplishing something similar.

One day remains before New Hampshire voters go to the polls in a pivotal primary that will determine whether Mr. Trump's popularity can actually translate into a victory at the ballot box. After finishing second in the Iowa caucuses to Texas Senator Ted Cruz, he needs to win to prove that his insurgent candidacy remains a force to be reckoned with.

Sweeping in from a side door, Mr. Trump, in a dark suit and a striped tie, doesn't disappoint them.

He promises to get tough – with the China on trade deals, with Iran on its nuclear weapons and with the Islamic State. "I guarantee you that [IS is] laughing like hell at the U.S." when politicians debate the legality of something like waterboarding, he says. "I'm going to be the worst thing that ever happened to them."

Mr. Trump skewers those he dislikes, particularly former Florida governor Jeb Bush. He does a mocking imitation of Mr. Bush's voice and calls him "a total stiff," "a spoiled child, "a lightweight" and "not a smart man."

Mostly, he assures the assembled voters that he will take care of things, offering very few details. "We gotta get Apple to make their computers in the U.S., okay?" he says.

He asserts that the key is preventing currency manipulation. "I know how to play that game better than anybody. Believe me, we're going to be so competitive."

Mr. Trump emphasizes that he is self-funding his campaign, which means he isn't beholden to moneyed interests. In a typically bombastic statement, he claims that had he taken outside contributions, he would have already amassed a fund of $500-million or more.

When a questioner asks if he could look Syrian refugee children in the eye and tell them that they are not welcome in the U.S., Mr. Trump doesn't hesitate to say yes. "We don't know where their parents came from," he says. "They have no documents whatsoever. They may be ISIS."

For good measure, he casts aspersions on all migrants travelling to Europe. "Where the hell do they get their cellphones?" he bellows. "Who's paying the bill for the cellphones?"

For voters like Mr. Strules and Mr. Frisone, Mr. Trump is right on the mark. Mr. Frisone says he would support Mr. Trump's call to prevent Muslims from entering the United States. "It's a start," he says. "Perhaps not to that extreme."

Mr. Trump urges everyone in the room at attend a large rally later on Monday in Manchester and, most of all, to vote in Tuesday's primary. Then, after he stops speaking, he is mobbed by people requesting selfies, handshakes and autographs. 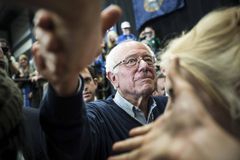