On Saturday morning, The Woodlands Bible Church in a suburban Houston office park is the front line of what might be Ted Cruz's last battle.

His wife, Heidi, paces the stage, microphone in hand, imploring the assembled crowd not to lose faith: Don't believe the media hype that a disappointing result in the March 1 Super Tuesday primaries would be the end of the Texas senator's presidential run, she tells them.

"Ted will go the distance regardless of Super Tuesday," Ms. Cruz declares, flanked by television screens showing fluttering American flags, as her apprehensive audience of 200 nods along.

It wasn't supposed to be this way. Mr. Cruz has spent three years positioning himself as the man to channel the anger of hard-right Republicans who believe their own party has not done enough to block Obamacare, same-sex marriage and access to abortion.

Then brash billionaire Donald Trump swooped in, tapping this same disaffection and leaping out front in the race for the party's nomination. When 13 states vote in primaries and caucuses Tuesday, he could build a formidable lead. To stay in the game, Mr. Cruz must win big in his home state and take nearly all of its 155 delegates.

But even in the staunchly conservative Woodlands, an affluent burg of tree-lined boulevards and super-sized shopping malls, some of Mr. Cruz's most loyal supporters concede he probably won't pull it off.

"I'm sure he'd like to get 75 per cent of the vote, but I don't think that's going to happen," says Randy Bays, a 54-year-old lawyer, standing at the back of the cavernous church. "I don't think there's any stopping the Trump train. I think it's too far down the track."

While Mr. Cruz has consistently topped the polls in Texas, he has struggled to build the sort of commanding lead he would need here to make up for his deficits in other primary states. The Real Clear Politics average of polls has Mr. Cruz at 35.9 per cent to 27.3 per cent for Mr. Trump and 18 per cent for Florida Senator Marco Rubio.

At a rally last week, Mr. Trump confidently boasted he could sweep in and defeat Mr. Cruz on his home turf. "He is like a little baby. Soft, weak, little baby," the reality television star told a rally in Nevada. "I think he's going to go way, way down in Texas." So I think we have a shot in Texas."

If Mr. Cruz is worried about losing in his backyard, he has so far tried not to show it: He has taken time to campaign in three other Super Tuesday states over the last week. While Ms. Cruz was barnstorming on his behalf Saturday, he was holding a rally outside the Georgia state capitol in Atlanta. The senator returns to Texas Monday for a final push, with rallies scheduled in Dallas and San Antonio.

But Ms. Cruz seems at times to suggest that the campaign was bracing for a poor result and already looking beyond Tuesday.

"If you were to read only the newspapers and watch TV, you would think that any one of these campaigns was going to take off or die depending on one state or another. This is entirely false. … We have built a campaign to last. We have more cash on hand than anyone in the race," she says. "We have built a grassroots army that this country has not seen since Ronald Reagan … we are doubling and tripling the number of houses knocked on and the phones called of any campaign in this race."

Most people in the church are simply incredulous that Mr. Cruz is in such a tough fight here. They proffer a range of theories to explain Mr. Trump's rise.

Kindergarten teacher Rachel McDermott, 42, contends that the media are rooting for the Democrats and give Mr. Trump constant attention because they believe he'll be easier to defeat in November.

"You have to take what the polls say with a grain of salt, because I think they are so backward and deep in peoples' pockets," says Ms. Lane, a 38-year-old stay-at-home mother.

The consensus among Mr. Cruz's supporters is that Mr. Trump is an opportunist, someone who will not actually deliver on the rock-ribbed social and economic conservatism both he and Mr. Cruz are promising. It's a view Mr. Trump's opponents are stoking in attack ads, most of which are a carousel of clips of a precampaign Mr. Trump declaring his support for abortion and universal health care.

"Trump is not a conservative. He's changed to be able to get elected," says Dar-Lynn Beard, 66, a bank executive.

They mock his outlandish positions: building a wall along the Mexican border ("Every time he talks, it gets 10 feet higher!" jokes one man) and deporting all illegal immigrants ("That's insane to think you can go round up 12 million people. Where do we live? That's not very American," says Ms. McDermott.) And they contend he is too over the top to be president.

"If you disagree with Trump, he calls you a liar and a louse. That kind of behaviour is really not fitting for a president," says retiree Jim Spurlock, 83.

So intense is the dislike among Mr. Cruz's supporters for Mr. Trump that many, including Mr. Spurlock and Mr. Bays, say they would pick Mr. Rubio over him. It may be a surprising statement – Mr. Rubio has, after all, positioned himself as the favourite of the Republican establishment – but to Mr. Cruz's supporters, Mr. Rubio is at least a serious-seeming candidate.

"Trump, in my view, is not the conservative type – he's a rabble-rouser showman," Mr. Bays says. "If it wasn't for Cruz, Rubio would be my next choice."

Ironically, such sentiments suggest Mr. Trump may actually have more to fear from a Cruz loss in Texas than a victory: If Mr. Cruz exits the race, the heretofore fractured anti-Trump vote could coalesce around Mr. Rubio.

Mark Keough, a broad-shouldered man who does double duty as a state legislator and the Bible Church's pastor, says the idea of an outsider coming in and reversing Barack Obama's agenda where Congress has failed is an attractive proposition.

"He has managed to tap into the feelings of the most conservative people. For the first time in a long time, we have a Republican Senate and a Republican House – we go through all the effort to get 'em elected – but they go up there and nothing changes," he says.

Bill O'Sullivan of Texas Patriots, a Woodlands-based Tea Party group backing Mr. Cruz, says Mr. Trump has tapped into a wellspring of disaffection within the party, and combined it with his legendary ability to generate free publicity.

"He became the vessel of a lot of people who have been ignored by the Republican leadership in Washington," he says. "He gets up every morning says 'What do I need to say to lead the news?' It's not built on policy, but that's the world we live in. It's a Kardashian world and he's a Kardashian candidate."

Still, Mr. O'Sullivan contends that a superior ground game, including the grassroots backing of groups like his, will carry the day for Mr. Cruz.

"The only great effort I can see around here is for Cruz," he says. "Trump is relying on stuff from 50,000 feet. We fight with bayonets."

Mr. Keough, for his part, is putting his faith in a power more eternal than the vagaries of media strategy and get-out-the-vote efforts to put Mr. Cruz over the top.

"I'm just hoping and praying that he can pull this off. God raises up kings and takes down kings and puts people in positions of authority, and no man can thwart his hand," Mr. Keough says. "So you prepare, you do everything you can, you work as hard as you can – but at the end of the day the battle is the Lord's." 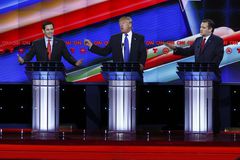