A Canadian woman was among as many as 50 environmental activists handcuffed and taken to jail Sunday on the second day of peaceful White House protests against TransCanada Corp.'s controversial Keystone XL pipeline.

Fifty protesters are already in a downtown D.C. jail following their arrests outside the White House on Saturday, the opening day of a two-week civil disobedience campaign. They're expected to be released Monday night.

By noon on a steamy Sunday, police began arresting more demonstrators, including 68-year-old Patricia Warwick of Toronto. A 65-year-old woman from Massachusetts who's celebrating her birthday was also led away in handcuffs from a stretch of sidewalk outside the White House.

The activists are facing charges of failing to obey an order governing protests on the sidewalk, said an official with the U.S. Park Police. The protesters were asked to move and when they refused, they were arrested and taken to the central cell block of the city's police department.

Officials for Tars Sands Action, the group that has organized the two-week campaign, say police originally assured them protesters would be released after being warned. Instead, they have been charged and held in jail for two nights.

"We've been told now that they're doing it as a deterrent," spokesman Daniel Kessler said.

The Martin Luther King Jr. memorial is going to be unveiled on the National Mall on Saturday, and police want to get the message across that they don't want the Keystone protest to mar those festivities, he said.

"Which is ironic because these are peaceful demonstrations, and exactly the type of protests that Martin Luther King advocated," he said.

President Barack Obama will decide by the end of the year whether to allow Calgary-based TransCanada to build the controversial, $7-billion (U.S.) pipeline. It would transport millions of barrels of Alberta oil sands crude a week through the American heartland and to Gulf Coast refineries.

Opponents say Keystone is an environmental disaster waiting to happen, pointing to a number of recent spills along pipelines. They also oppose Alberta's oil sands due to their high greenhouse gas emissions. Advocates, meantime, say the pipeline will create thousands of American jobs amid a lingering recession, and will also help end U.S. dependence on Middle Eastern oil.

One Canadian activist at the protest on Sunday said she hoped the event would draw further attention to the pipeline controversy in the United States.

"I definitely feel like this is a moment where we can highlight this issue in the general public, in particular in the U.S.," said Heather Milton Lightening, an Alberta activist who's part of a group called the Indigenous Environmental Network.

"For us, it's an issue of importance to get community voices heard because they are the ones who are most impacted. When it comes to First Nations in Canada, many of the communities … are dealing with drilling, open-pit mining, they're dealing with infrastructure on their land."

She added the Keystone XL would traverse "a huge amount of land. There are many sacred sites it's going to pass through … . The tar sands don't make sense, but the pipelines make even less sense."

People from across the United States participated in Sunday's event, including a group of doctors from Chesapeake Physicians for Social Responsibility. They wore white lab coats as they stood at a White House gate and awaited arrest.

Mr. Obama hasn't been in Washington to take in the protests; he's vacationing with his family in Martha's Vineyard. But the activists are vowing they'll still be outside 1600 Pennsylvania Ave. when he returns late next week.

Keystone XL has become a lightning rod for the U.S. environmental movement in the wake of failed climate change legislation once passionately promoted by the president. Several opponents of the project, including jailed U.S. environmentalist Bill McKibben, have pointed out that the pipeline decision is one of few the president can make that does not require congressional involvement.

"Saturday's arrests and overnight jailings are already lighting a fire," Mike Tidwell, director of the Chesapeake Climate Action Network, who was also arrested Saturday, said in a statement released by Tar Sands Action.

"More people are now inspired, determined, and committed to join," he said. "Word is spreading."

The State Department's final environmental analysis of the project is due any day now. Then Mr. Obama will have 90 days to decide whether the pipeline is in the U.S. national interest.

There was no immediate reply Sunday to a request for comment about the protests from TransCanada officials. 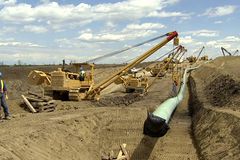 Oil sands critics target a new concern – pipelines
August 1, 2011
Natural resources minister tries to sway U.S. on controversial Keystone pipeline
July 29, 2011
TransCanada profits up 30 per cent in second-quarter
July 28, 2011
Follow us on Twitter @globeandmail Opens in a new window
Report an error
Due to technical reasons, we have temporarily removed commenting from our articles. We hope to have this fixed soon. Thank you for your patience. If you are looking to give feedback on our new site, please send it along to feedback@globeandmail.com. If you want to write a letter to the editor, please forward to letters@globeandmail.com.
Comments