But this outbreak didn't provoke any global headlines, because it was just another cholera outbreak in Ghana – an almost annual event in the capital, Accra.

Ebola, of course, has captured the media's attention: It has a much higher death rate than other diseases, and it has had a devastating effect on Liberia, Sierra Leone and Guinea. The world is right to send medical aid to those countries and to stay alert to suspected new cases. But it's also true that Ebola is less contagious than other diseases; it is transmitted by bodily fluids, not by air, water or mosquitoes. The virus has been spread by commercial airplane only once, by an ill passenger to Nigeria.

Other diseases, including malaria and diarrheal diseases such as cholera, routinely kill far more people than Ebola across Africa. In the Ghana outbreak alone, more than 3,100 people were infected and nearly 50 were killed. Even at the epicentre of the Ebola outbreak, malaria has caused up to 35 times more deaths than Ebola this year.

But Ebola is a warning sign of a much bigger crisis: the fragility of African health and sanitation systems after many years of poverty, illiteracy, neglect and, in some countries, catastrophic civil war. Even in countries that have recently seen impressive economic growth and foreign investment, the money is failing to reach the hospitals and health-care workers who can prevent disease outbreaks.

Government authority has been almost non-existent in many West African regions, including, crucially, the border crossings in the Ebola "hot zone" where a million people live. Hospitals and clinics, meanwhile, are severely under-staffed, suffer from shortages of equipment (even such basics as disposable rubber gloves) and medicine, and often lack even electricity and running water.

Everywhere the signs of state collapse have been exposed. Bodies of Ebola victims, often lie uncollected in homes and streets for days at a time. Some hospitals have been completely abandoned after staff and patients fled. Quarantine efforts sometimes fail because people simply walk around the checkpoints.

The spread of Ebola out from the villages of southern Guinea, the source of the current outbreak, was fuelled by a similar state failure. Guinea's first cases were confirmed in March, and by April the virus was taking hold. But the health system was so inadequate, and ignorance so widespread, that many people with the Ebola virus decided to cross over the poorly controlled border to Sierra Leone, where they sought treatment from a herbalist who claimed to have the power to cure Ebola.

Instead of curing others, she soon became infected with the Ebola virus and died. Mourners at her funeral then spread the disease across the region, according to published reports. The herbalist's death led to hundreds of new cases of the disease in Sierra Leone.

Margaret Chan, director-general of the World Health Organization, says the Ebola outbreak has "allowed the world to see what can happen when a lethal and deadly dreaded virus takes root in a setting of extreme poverty and dysfunctional health systems."

The hardest-hit countries "have only recently emerged from years of conflict and civil war that have left their health systems largely destroyed or severely disabled and, in some areas, left a generation of children without education," Dr. Chan said in a report this week in the New England Journal of Medicine.

"In these countries, only one or two doctors are available for every 100,000 people, and these doctors are heavily concentrated in urban areas. Isolation wards and even hospital capacity for infection control are virtually non-existent. Contacts of infected persons are being traced but not consistently isolated for monitoring."

It's clear that the world neglected the Ebola outbreak when it first emerged. Only a few aid agencies, notably Medecins Sans Frontieres (Doctors Without Borders), responded speedily to the crisis. The United Nations health agency, the WHO, was slow to act. But governments in Africa have also failed to invest in health. Most countries hit by Ebola were spending less than $100 annually per person on health care before the outbreak began.

As the Ebola crisis deepens and the medical burden becomes greater, the worst-hit countries have become so desperate for revenue that they've issued treasury bills as a crude way to raise money.

"The outbreak far outstrips their capacity to respond," Dr. Chan said of the governments afflicted by Ebola. "The attitude of the public is summarized in two sad words: helpless and hopeless. The most urgent request is for more medical staff ... According to current estimates, a facility treating 70 patients needs at least 250 health care workers."

Deep poverty and the legacy of civil war are among the key reasons for the poor health systems in these countries. But there is also growing evidence, across Africa, that most governments are failing to give enough priority to health care.

Of the four countries hit by Ebola, three of them – Guinea, Nigeria and Sierra Leone – have lagged behind the goals in the Abuja Declaration. Guinea and Nigeria, in particular, are far behind the target, despite their substantial revenue from mining and oil in recent years. Liberia was the only one of the four countries to reach its Abuja spending goals. But even this has been inadequate, as the Ebola crisis quickly showed.

To make the situation even worse, illiteracy has hampered the efforts to educate people about disease prevention. In the Ebola-hit countries, there is widespread distrust of the health system and a preference for traditional healers. People see hospitals as prisons or death sentences, since Ebola patients usually don't survive. They fear the stigma of being identified with Ebola, so they keep infected family members at home. Wild rumours have circulated, claiming that Ebola is a hoax, or a scam by governments to get money.

One of the biggest threats is the combined effect of many diseases at the same time. Because the Ebola outbreak has brought the health system to a standstill, common diseases such as malaria are going untreated, and death rates are rising – "which is completely ridiculous," said Joanne Liu, a Canadian who is international president of MSF. "What needs to happen now is we need to be able to restore basic health-care access as soon as possible."

In the Liberian capital, Monrovia, almost every hospital has been shut down by the Ebola crisis. Pregnant women have been seen wandering the streets, unable to get care to deliver their babies. Some have died of labor complications as a result. Others have suffered miscarriages. "People are knocking on our doors in desperate need of health care," Dr. Liu told a briefing in Geneva.

And then there are the quieter health crises that don't draw any publicity at all. In Sierra Leone, more than 10,000 people are dependent on long-term life-saving drug treatment for HIV. When Ebola hit, the HIV treatment centres were so disrupted that many people stopped getting their medicine. In the months to come, they could become the victims that never get counted. 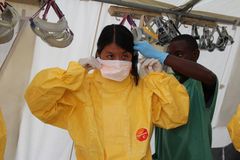 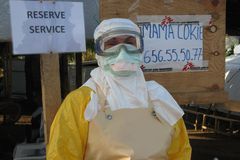 Courage, death and survival: On the front lines of the Ebola outbreak
August 8, 2014
Ebola explainer: A deadly killer surfaces again
March 25, 2014
Follow Geoffrey York on Twitter @geoffreyyork
Report an error Editorial code of conduct
Due to technical reasons, we have temporarily removed commenting from our articles. We hope to have this fixed soon. Thank you for your patience. If you are looking to give feedback on our new site, please send it along to feedback@globeandmail.com. If you want to write a letter to the editor, please forward to letters@globeandmail.com.
Comments