After countless generations of living in silence on the shores of a vast and restless cosmic ocean, the human species can finally hear the surf.

Gravitational waves – the most elusive of all the phenomena predicted by Albert Einstein's general theory of relativity – have been detected a century after they were first conceived.

The long-rumoured discovery was made official at a news briefing on Thursday when scientists associated with Advanced LIGO, a sprawling, $1.1-billion United States-led experiment, revealed their initial results to a packed briefing room a few blocks from the White House.

For the history books, Sept. 14, 2015, at 5:51 a.m. Eastern Time marks the moment we stopped being deaf to the rolling swells of gravitational energy that rattle our planet along with the rest of the universe.

It was then that the subtle but unmistakable vibrations caused by the collision of two massive black holes in a distant galaxy happened to arrive at the newly refurbished LIGO (Laser Interferometer Gravitational-Wave Observatory) detectors in Hanford, Wash., and Livingston, La.

The vibrations were carried not by sound or by light, but by space itself, shuddering in response to an unimaginably violent event that took place 1.3 billion light years away. At each Advanced LIGO facility, that shuddering momentarily put two precisely tuned laser beams out of sync.

The effect rose above the detectors' noise limit for only about one-quarter of a second, but it conveyed all the information needed to reveal what was seen.

"I felt disbelief," Rainer Weiss, professor of physics emeritus at the Massachusetts Institute of Technology and one of the experiment's co-founders, said when he first learned of the signal. "It was too damn good!"

To top it off, the detection was made even before the experiment was officially in its science run, when scientists were still performing engineering tests of their hardware.

"I think we just got incredibly lucky, said Harald Pfeiffer, a scientist with the Advanced LIGO team who is based at the University of Toronto.

"Of course, the collaboration was very surprised, but everybody has done a tremendous job double– and triple-checking that the detectors operated normally," said Dr. Pfeiffer, who is a member of the cosmology and gravity program supported by the Canadian Institute for Advanced Research.

The checking was essential for ruling out false alarms in an experiment so sensitive that it can be affected by a bicycle riding by or by weather patterns half a continent away.

"We have every confidence that this is the real thing," Dr. Pfeiffer added. To back up their claims, the Advanced LIGO team has also release a peer-reviewed paper published in the journal Physical Review Letters.

By any measure, this first positive detection from Advanced LIGO is more exciting than scientists dared hoped for at least three reasons.

First, it confirms that gravitational waves exist and can be detected by current technology, thereby checking off relativity's last, great unproven prediction. That alone should earn a ticket to Stockholm for whomever the Nobel Prize committee decides should be recognized for mounting the effort.

Second, it provides the strongest evidence to date that black holes are real. Although the evidence has been building for decades, black holes are, well, black. They do not emit light and so cannot be seen directly. The gravitational waves produced by two large black holes spiralling into each other offer an entirely independent and far more precise way to verify that such bizarre objects do indeed arise in our universe and can merge when they form in pairs.

Third, the black holes that collided were of enormous mass, each one about 30 times the mass of our sun. Until now, it was not clear whether nature can produce black holes of that weight class, presumably triggered by the collapse of one or more enormous stars. The result may therefore be saying something significant about what conditions were like when the black holes were formed – potentially when the universe itself was very young and the first generation of stars was just turning on.

Before Thursday's announcement, "I don't think you'd find many people taking a bet on finding such a system," said Luis Lehner, a theorist at the Perimeter Institute in Waterloo, Ont., who works closely with members of the Advanced LIGO team.

"Taken together with the promise of what else may come as the experiment's sensitivity improves, this week's news represents, a monumental achievement," Dr. Lehner said.

The key to understanding gravitational waves is to forget the idea that gravity is an invisible force of attraction between two massive objects. Instead, picture the space around those objects as curved in a way that causes them to move together.

The curvature of space cannot be seen, but its effects are obvious. Think of a bowling ball sitting on a trampoline. The weight of the bowling ball deforms the stretchy trampoline surface, creating a dip. Put a second bowling ball on the trampoline and the two balls naturally roll toward each other until they touch, forming a bigger dip. Click! That's gravity in action, with the trampoline representing space.

Einstein first presented this radical reformulation of gravity in a series of lectures to the Prussian Academy of Sciences in November, 1915. It stands today as one of the single boldest leaps ever taken by the human imagination.

Soon, Einstein and other physicists were grappling with the consequences of general relativity and by 1916, two of its more bizarre implications had already come to light.

One is the idea that there can be places where space is curved so severely that a beam of light cannot escape – a black hole in space. Another is that the mathematics of relativity allow for "travelling solutions," ripples in space that propagate like waves. Any moving object should produce such waves – the more massive and faster the object, the bigger the gravitational waves.

At the time, Einstein thought that gravitational waves would be impossible to detect. Given the state of technology in First World War-era Europe, he was right. But by the 1960s scientists were thinking differently, and the hunt was on.

Physicist Joe Weber at the University of Maryland was the first to try tuning into gravity's cosmic symphony. He reasoned that if one could make an antenna to pick up electromagnetic waves – i.e. radio – why not gravitational waves?

His antenna of choice was a solid aluminum cylinder about 1.5 metres long suspended by steel wires in a vacuum chamber. The idea was that as gravitational waves passed through the laboratory, they would alternately squeeze and stretch the cylinder, causing it to resonate like a bell after it is rung.

Dr. Weber himself admitted that the experiment was a long shot and, despite a controversial claim that it had picked up a signal, it is generally considered to have come up empty.

Meanwhile, in 1978, astronomers reported indirect evidence for gravitational waves based on a change in the motion of a pair of compact stars known as pulsars. Pulsars give off regular beeps that can be timed very precisely. The timing showed the two objects were gradually losing energy and spiralling in toward each other. The missing energy was precisely what would be expected if the pulsars were radiating gravitational waves.

By the 1990s, scientists were on to a new approach, using twin laser beams pointing at right angles to each other. The idea is that the beams travel back and forth along four-kilometre-long tunnels of precisely equal length. When they are compared, there should normally be no difference between the beams. But if space is momentarily distorted by a passing gravitational wave, then the timing of the beams is thrown out of sync.

"It's done with tremendous elegance and cunning," Dr. Weiss said.

This is the strategy that led to LIGO, with identical facilities in two locations so that candidate detections at each site could be cross-checked against each other.

Throughout the 2000s, LIGO saw nothing, but starting in 2010 the detectors were dramatically upgraded. In their new, advanced state, they switched on last fall and the team was soon rewarded with what would prove to be an Earth-shattering find.

The significance of the Advanced LIGO announcement is not just that gravitational waves have been detected, but that they were seen so promptly and with such a clear, clean signal. That bodes well for using the experiment as a new probe of the cosmos and opens the possibility of making unexpected discoveries – just as when Galileo turned his telescope to the heavens for the first time.

"Each time a new window has opened up, there have been big surprises," said Kip Thorne, a renowned expert in gravitational theory at the California Institute of Technology who long championed the development of LIGO.

Advanced LIGO is not yet operating at its maximum sensitivity, so it is virtually certain that more detections are in the offing.

Meanwhile, researchers are working on ways to expand the reach of gravitational wave detection using a proposed space-based system called LISA (Laser Interferometer Space Antenna), with laser beams bouncing between three satellites one million kilometres apart. A pathfinder mission to test the technology for LISA was launched by the European Space Agency in December.

Neil Turok, director of the Perimeter Institute, said the technology would undoubtedly improve. If it can reach a sensitivity 100,000 times better than Advanced LIGO has already demonstrated, he said, then it would be possible to hear the booming of gravitational waves from the birth of the universe about 13.8 billion years ago.

Dr. Turok added that the grand conclusion to draw from this week's announcement "is that it tells us about our capacity to understand the universe. … "This kind of achievement should give us great confidence," he said. "If we can do this, what can't we do?" 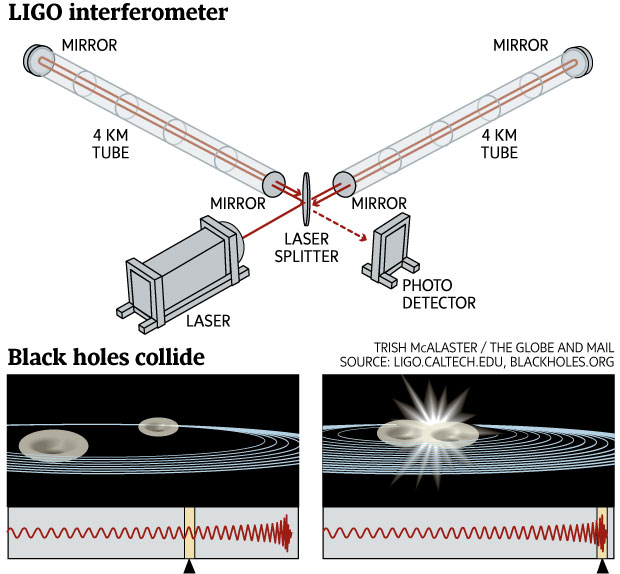 The Advanced LIGO (Laser Interferometer Gravitational-Wave Observatory) works by splitting a laser beam and sending the two resulting beams back and forth along four-kilometre-long tunnels built at right angles. One of the beams is then subtracted from the other. Because they are identical, the beams normally cancel out so that nothing is seen in the photo detector. When a passing gravitational wave briefly deforms space around the detector, the two beams are temporarily out of sync and the photo detector registers a signal.
Two orbiting black holes of enormous mass were responsible for the discovery signal that LIGO received on Sept. 14, 2015. The rapidly moving objects emitted gravitational waves as they whipped around each other. The waves got shorter and stronger as the black holes got closer and they peaked when the black holes merged violently. The waves travelled 1.3 billion light years before reaching Earth.