When Justin Trudeau sits down for a meeting Saturday with Jack Ma, he will come face-to-face with the most recognizable captain of China's ambitious new economy.

But the Prime Minister will also be speaking with a powerful figure who has become useful to the Communist Party in shaping how the world sees China.

Foreign audiences may look askance when the leaders of an authoritarian government speak. But an articulate billionaire known as China's Steve Jobs commands a much warmer reception.

"The party is very interested in having a wider range of spokesmen, especially some that look impartial like business people," said Shirley Lin, a professor of political economy at the University of Virginia and the Chinese University of Hong Kong.

China's decades-long embrace of market forces unlocked the furious entrepreneurial ambition that built modern China. But it also eroded the party's absolute command over the country's political and economic levers.

To maintain its supremacy, "the party has to embrace and co-opt the newly rising business class," said Sonny Lo, co-director at the Centre for Greater China Studies at the Education University of Hong Kong.

It has all manner of tools at its disposal. State-run banks control loans, while the party oversees policies that can, in an instant, bankrupt companies. "So the interest of the business elites is to maintain political stability," Prof. Lo said. It creates a "symbiotic relationship."

What it means is that at virtually every turn, the people Mr. Trudeau has met in China are some form of government representative. And in meeting them, he is not only making the case for Canada, he is also helping them to shape the way Canada thinks about China.

Meeting the Prime Minister provides "a golden opportunity for Chinese entrepreneurs like Jack Ma and others to actively engage Canada, so an image of peaceful China can be moulded or generated," Prof. Lo said.

Think of Mr. Ma, the founder of e-business colossus Alibaba, as a "civilian ambassador" for China, said Wang Fuzhong, an economist at Central University of Finance and Economics in Beijing. "He can help foreign leaders open their minds" about China, he said.

Mr. Ma is hardly the only business person Mr. Trudeau will meet in China who plays a double role.

On Tuesday, hours after landing in Beijing, he answered questions from the China Entrepreneur Club, an exclusive group of billionaires who have come to act as a second foreign ministry.

The club's members regularly share the stage with Chinese government officials when they assemble for overseas travels. They can be hard to distinguish from the diplomats, as they call for more co-operation between countries and seek to allay fears about China's unsteady economy. They typically demand, too, to meet with heads of state wherever they go. And their message rarely deviates from the sanctioned narrative.

On Friday, Mr. Trudeau strode onto a basketball court with Yao Ming, the former NBA star who is also vice-chairman of the Shanghai Public Diplomacy Association and a member of the Chinese People's Political Consultative Conference.

China has successfully recruited some of its best-known faces to the body, which is designed to propose policy but also legitimizes China's rubber-stamp legislature, which is largely a front for Communist Party decision making.

Some have continued to do work that challenges their home country – in particular Mr. Yao, who has lobbied against China's consumption of shark fin soup and African elephant ivory. Others have grown shrilly anti-Western. The Hong Kong-born Mr. Chan has called the United States "the most corrupt" country on earth, told Taiwan and Hong Kong they have "too much freedom" and said of China: "Our country is the best."

China has employed its athletes, too, to wave the flag, sending gold medal winners from the Rio Olympics to Hong Kong. It has called other business leaders into different forms of service, like teaching at the Central Party School.

But few are as important to China's efforts as Mr. Ma.

Alibaba did not respond to multiple requests for comment. Mr. Ma has, however, acknowledged the fine line he must walk, saying: "Be in love with the government but don't marry it."

Mr. Ma's value to Chinese leadership has grown with his own economic value, a shift Porter Erisman witnessed between 2000 and 2008, as a vice-president with the company.

"As Jack proved Alibaba's worth to China's economy, he became more embraced by the Chinese government as a symbol of 'the new China,'" said Mr. Erisman, the author of Alibaba's World: How a Remarkable Chinese Company is Changing the Face of Global Business.

"At times he was one of a handful of business representatives from China who were chosen to travel with Chinese government delegations overseas."

There are benefits to this, since it can help the company win support when it stages incursions into parts of the economy dominated by state-owned companies. "But it also raises the risk that parts of Alibaba's businesses will be slowly co-opted by the government for its own purposes," Mr. Erisman said.

Observers have raised questions about Mr. Ma's announcement last year that he would buy the Hong Kong-based South China Morning Post, for example. The newspaper had been one of the few independent English-language newspapers. The newspaper has continued to publish content critical of China since Mr. Ma's acquisition. But it also carried an interview with a legal activist detained in mainland China who said "I repent for what I did." Critics said the interview resembled a forced confession.

China has for years overseen "united front" efforts that have involved shadowy efforts by people affiliated to its intelligence services to promote its interests in Taiwan and elsewhere. But that's a far cry from Mr. Ma's very public meetings with foreign leaders, said J. Michael Cole, a Taipei-based former analyst with the Canadian Security Intelligence Service who is now editor-in-chief of thinking-taiwan.com.

Mr. Ma "is definitely a face of China that they've been promoting," he said, someone friendlier and more accessible. "But I don't find it particularly troubling. It's super high profile. There's none of the dangerous stuff going on, where people are actually co-opted and bought off and unduly influenced."

For Canada, meanwhile, Mr. Ma offers genuine economic power. China's political leaders may be the gatekeepers of major elements of its economy, such as natural resources and financial services. But for Canadian farmers, smaller manufacturers and entrepreneurs, no one can match Mr. Ma's access to a market with hundreds of millions of people shopping online. Alibaba, in fact, is expected to launch an online hub for Canadian products on Saturday.

"Many foreign leaders meet with Jack as a way of gaining insight and access for their countries' products to China's growing middle class," Mr. Erisman said. "It's a political win for Mr. Trudeau, as a meeting with Jack Ma can rightfully be pitched as helping pave the way for Canadian exports to gain access to the China market." 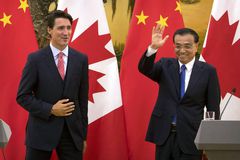