Mali's security forces have begun killing civilians in a wave of ethnic reprisals near the frontlines of the war against Islamist insurgents, a human-rights group says.

The report shows the dangerous potential for a widening conflict in a country with complex ethnic divisions where rebels can blend in with the local population, and where a French bombing campaign is unlikely to eliminate the insurgents.

Canada, which has long history of aid and investment in Mali, has sent a C-17 military transport plane to help France in its military operation in the country.

As the war deepens, Canada's Foreign Affairs department has announced that it has evacuated its embassy in Mali's capital, Bamako, leaving behind only a skeleton staff. All 29 dependents of the Canadian embassy staff have now been sent out of the country, along with all non-essential staff, as Canada advised its citizens to leave Mali immediately.

The French-led military campaign against the rebels has been slow to advance. Even when the Islamists have been driven out of frontline towns by French air strikes, as they were in the town of Diabaly in recent days, French and Malian forces have been reluctant to march in because of the fear that the Islamists may have simply removed their turbans, switched to local clothing, and stayed behind to ambush their enemies.

The Islamist insurgents have "diversified their tactics," French defence minister Jean-Yves Le Drian said Sunday. "They can leave a town at any time, or mingle with the population to avoid air strikes. It's urban guerrilla warfare, as well as a war, so it's very complicated to manage."

One senior Malian officer said the army was being cautious in its advance into Diabaly because some of the local residents appear to support the Islamists.

Ground forces will be required to root out the insurgents from many of Mali's towns. Yet those forces are in short supply, largely because the Malian army has collapsed into a poorly disciplined and fragmented group, with some of its units reluctant to fight the rebels.

France is deploying 2,500 troops in Mali to support its air strikes, but it is urgently calling for West African ground forces to reinforce the military operation. And those African forces are unlikely to arrive in large numbers for weeks, despite French pleas for urgent action, French foreign minister Laurent Fabius acknowledged on the weekend.

The new report by Human Rights Watch, citing "credible information" in the town of Niono in central Mali, says a number of Tuareg and Arab civilians have been subjected to "serious abuses," including murder, by the security forces.

The Tuareg and Arab minorities in Mali are often blamed for the rebellion in northern Mali, although many of them do not support it.

Western diplomats in Mali have long feared that the army would become involved in revenge killings. Malian soldiers have already been implicated in a number of abuses, including killings and kidnappings of Tuaregs and others suspected of rebel sympathies. Four months ago, Malian troops opened fire on bus passengers, killing 16 Mauritanian preachers at a military checkpoint, because they were reportedly mistaken for Islamist rebels.

"We urge the Malian authorities, as well as the French and ECOWAS [West African] soldiers/authorities to do their utmost to ensure the protection of all civilians who might be vulnerable to reprisals and other related abuses," Human Rights Watch said.

"Malians from all ethnic groups have suffered enough from the armed conflict."

All sides of the Mali conflict have been guilty of human-rights abuses. The International Criminal Court has already launched an investigation of alleged war crimes in Mali. The militant Islamists who have seized control of northern Mali have amputated the hands of accused thieves, destroyed historic sites, recruited child soldiers, and committed a range of other abuses.

Since capturing northern Mali last April, three Islamist militia groups have trained and deployed several hundred child soldiers, often putting them on the front lines where they could be bombed and killed, according to Human Rights Watch. Some of the child soldiers are reported to be as young as 12.

Meanwhile, French warplanes are continuing their attacks on suspected rebel camps, command posts, logistics bases and "terrorist vehicles" in northern Mali. In recent days, officials said, they hit targets in the Timbuktu and Gao regions, including a dozen strikes in a 24-hour period from Saturday to Sunday.

About 400 troops from Nigeria, Togo and Benin arrived in Mali on Sunday, along with an unspecified number of troops from Chad. A total of about 3,000 African troops have been pledged for the military mission in Mali, but most have been slow to arrive.

The African intervention force was originally scheduled to arrive much later this year, with the military campaign against the rebels not expected to begin until September or October. The mission was speeded up after an unexpected rebel offensive this month, which threatened to capture key towns in central Mali. 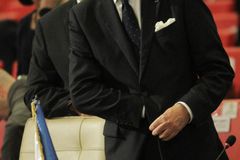 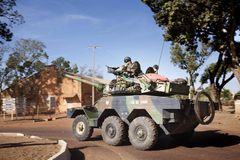 Opinion
Jeffrey Simpson: Entering Mali is easy, exiting, not so much
January 19, 2013 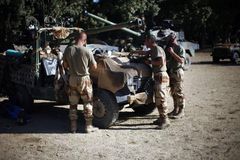 Malians in Paris praise France’s intervention in their homeland
January 18, 2013 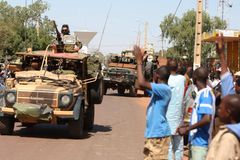 Why the bond between Mali and Moncton is so strong
January 18, 2013 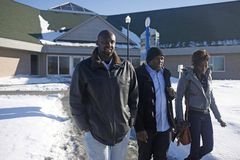