European members of the UN Security Council on Monday will seek approval to authorize military operations against human trafficking rings that set out from Libya.

EU foreign policy chief Federica Mogherini will brief a special Council meeting on plans to stem the influx of migrants, which could involve seizing or destroying boats operated by traffickers. However Russia, which has veto power, says destroying boats would be too extreme.

More than 5,000 refugees have died over the past 18 months as boats operated by smugglers have capsized off the North African coast, triggering alarm among European leaders seeking to halt the flow.

Most refugees set sail from the lawless shores of Libya, where the breakdown of government since the ouster of Moammar Gadhafi has allowed ruthless people traffickers to operate with impunity.

Critics say military action in Libyan waters or stopping a vessel flying the country's flag without an international mandate would break international law.

UN Secretary-General Ban Ki-moon has also criticized the plan, saying that destroying boats could affect the livelihoods of Libyan fishermen, who may be forced into dealings with the smugglers to make ends meet.

Diplomats in Brussels said they hoped that, if UN backing could be obtained, EU foreign ministers could give an initial go-ahead to the mission on May 18.

The plan would begin by gathering intelligence on the smuggling boats. The EU could then use ships and planes to intercept the vessels at sea before they were used to carry migrants, diplomats said.

Intervention on shore in Libya to destroy smugglers' boats is seen as less likely because it would need an invitation from Libya.

The aim is "to identify the points of departure, the security situation on the ground" and establish a multinational team of planning officers, said a military source in Paris.

The EU's executive Commission this week also will propose redistributing migrants more evenly, opposed by some in the bloc, to ease the burden on Italy and other members facing an influx.

The Commission is set to unveil on Wednesday its long-awaited European Agenda on Migration which will call for an overhaul of EU policies.

Italy and other southern EU states are clamouring for help to deal with thousands of migrants reaching Europe. Mild spring weather and calm summer seas are expected to push total arrivals in Italy for 2015 to 200,000, an increase of 30,000 on last year, according to an Interior Ministry projection.

The proposals need approval from all the EU's 28 governments – which is far from certain.

The plan will call for a quota system under which refugees would be shared out when the bloc faces a big influx of asylum-seekers.

"I will argue … for the introduction of a system of quotas. … On 13 May, we will propose a system of relocation throughout the European Union. Solidarity must be shared," European Commission President Jean-Claude Juncker said in April.

The Commission will also call for the EU to agree to resettle more of the millions of refugees from the Syrian war who are living in neighbouring countries. It will also call for more opportunities for highly-skilled migrants to legally move to the EU, an official said.

Italy, Germany and Austria back a quota system. But, with anti-immigration parties on the rise, a number of EU governments oppose it.

Italian navy finds what is thought to be capsized migrant boat
May 7, 2015 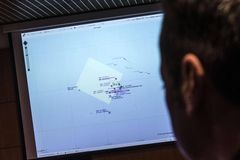