A growing scandal over horsemeat found in beef products has swept across Europe, leaving many Europeans wondering where their food is coming from and just what it contains.

On Sunday, supermarkets across Britain, France and Sweden began pulling millions of packages of beef lasagna, spaghetti, burgers and dozens of other products from their shelves after tests showed some contained up to 100 per cent horsemeat. Government officials in several countries have also called in the police to investigate what some are calling a criminal conspiracy. And many are now pointing fingers at Romania and Poland where, it is alleged, much of the horsemeat originated and was mixed into meat sold as beef.

In Britain, some are calling for a total ban on beef imports and the food industry has been ordered to test every beef product. The results of those tests are expected later this week and officials say they are likely to turn up even more contaminated meat.

"This is a conspiracy against the public," Environment Secretary Owen Paterson told the BBC. "Now, it's either a case of gross incompetence or … a case of an international criminal conspiracy."

The case has raised troubling issues about how food is processed across the European Union's open borders, where food products manufactured in one country can have ingredients sourced by suppliers in many others. And it has prompted questions about how fierce competition is driving some suppliers to cut costs.

Officials have said none of the beef tested so far is dangerous to eat, but they worry future samples could contain phenylbutazone, a painkiller used on horses that can cause blood disorders in humans.

Some of the beef products sold in Britain went through five different suppliers in four countries before landing on supermarket shelves. The beef ingredient in just one frozen meal made by food giant Findus travelled through a processor in France, which bought it from a trader in Cyprus, who used a trader in the Netherlands who received it from two butchers in Romania.

In other cases meat from two slaughterhouses in Poland, where cattle and horses were slaughtered, followed a similar winding path through factories in France and Luxembourg and then on to grocery stores in Britain and Ireland. While the EU has strict rules about food labelling, enforcement is weak and penalties for mislabelling are considered light.

In many cases the food companies involved said they had no idea where the meat originated and most are now suing their suppliers who are suing their subcontractors. Several grocery stores and Findus have threatened to sue French food processor Comigel S.A.S., which manufactures frozen-food products sold in more than a dozen countries. Comigel has blamed its supplier, another French company called Spanghero. "We were victims and it's clear now that the problem was neither with Findus nor with Comigel," Comigel's chief executive, Erick Lehagre, told reporters in France. In a statement, Spanghero confirmed it sourced beef in Romania, but said the company had no idea it contained horsemeat. It plans to sue the Romanians.

Officials in Romania and Poland, both major horse meat exporters, promised to investigate the allegations. Romania has 25 abattoirs that slaughter horses, and the meat is sold in several countries where it is considered a delicacy. Romanian officials have insisted their facilities meet EU standards and that no irregularities have been found, and President Traian Basescu said his country would lose credibility "for many years," if the Romanian butchers turn out to be at the root of the problem.

Critics say the constant drive to keep retail prices down has stretched the supply chain. For example, a package of eight frozen burgers at several British supermarkets sells for less than $3 a box. But the price of beef has been rising to record levels around the world, making it harder to keep the retail price competitive. Horsemeat can be an attractive alternative because it is up to 40 per cent cheaper than beef in some countries.

One meat supplier in Ireland, Martin McAdam, described to reporters last week how he was pressured by food companies to find cheaper ingredients in Poland. "There could be savings of anything between €5,000 [$6,700] and €10,000 [$13,400] per truck", he told an Irish radio station. The food companies have denied using pressure tactics but confirmed they source meat from several countries.

There are also questions about government agencies that monitor food safety. Britain's Food Standards Agency has not tested for horse meat in beef for 10 years and FSA chief executive Catherine Brown acknowledged recently that Britons could have been eating burgers containing horsemeat for a year.

The scandal only came to light when the Food Safety Authority of Ireland did some random testing for horse meat in burgers last November. The test results, released last month, showed some of the beef contained up to 29 per cent horsemeat. That prompted a wave of recalls involving 10 million burgers and further testing in Britain and elsewhere, which pointed to the East European suppliers.

Horse meat is not uncommon in Europe and roughly 65,000 horses are moved around every year for slaughtering, according to World Horse Welfare, a British-based organization. However, it said the rules for documenting which horses are safe to eat are inconsistent and rarely enforced.

'Top Chef Canada' faces backlash for use of horse meat in episode
May 17, 2011 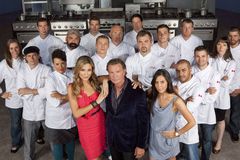