On Monday, Ukraine played its first game here as co-host of Euro 2012, against Sweden. On such days of soaring national pride, so much depends on how the national team performs. And rarely so much as with Ukraine, perceived by many as the rogue country in what is an increasingly bizarre soccer tournament.

For Ukraine, like Poland, co-hosting Euro 2012 was supposed to be a giant leap forward, a presentation of Ukraine as a modern Eastern European nation, sophisticated enough economically and politically to co-anchor the third-largest sporting event in the world and smoothly entertain up to a million soccer fans.

Instead, the international exposure has cast the country in a harsh light. It has been criticized for imprisoning a former prime minister, boycotted by royalty and the heads of Germany and France, and excoriated for apparent neo-Nazi behaviour among fans.

It's not unusual for nations to use sporting events to signal their ascendancy – to kick-start major infrastructure projects and put on a show of pageantry. China did it with the 2008 Summer Olympics; Russia and Brazil are next in line.

But here in Kiev, there is a sense that Ukraine's coming-out party was ill-conceived, or at least ill-timed. "I think there is a mix of excitement and worry [about Euro 2012]," said Barrie Hebb, a Canadian economist based in Odessa. "For some, this is a chance to showcase the country and remind Western Europeans that Ukraine is part of Europe. For others, there is a sense that hosting this event is premature. The country is not rich, there are many other problems that need to be dealt with, and worse still, if the country is not prepared in time to meet visitors' expectations, this could cause a national embarrassment."

It's mid-afternoon on the Maidan Nezalezhnosti, the famous Independence Square, and the soccer fans don't exactly throng. No matter how loud the disco music in the vast, official fan zone, the party is desultory.

This is the square, an impressive and pretty place, that saw riots in 2001 to demand the resignation of president Leonid Kuchma. Those protests brought Yulia Tymoshenko to prominence. In 2004, it was the main site of the Orange Revolution, which challenged the alleged hijacking of the presidential election by Viktor Yanukovych, and brought Viktor Yushchenko, the opposition candidate, to power as president. Into power with him as prime minister came Yulia Tymoshenko.

Today, Ms. Tymoshenko is in prison in Kharkiv, racked by back pain. A small protest about her treatment is under way in a remote corner of the square. Nobody pays much attention except curious Swedes. They move toward the game's venue, the massive, refurbished (at a reported cost of $500-million) Olympic stadium nearby.

This city on this day feels tense – Ukraine was hammered in the lead-up to the event. In April, European soccer boss, the UEFA chief Michel Platini, came to Lviv, a host city, and accused authorities of doing nothing to curb the "bandits and crooks" who had hiked hotel prices in Ukraine to such high levels that soccer fans were discouraged from coming. In May, the family and supporters of Ms. Tymoshenko – who was jailed in October, 2011 for seven years on corruption charges, in what critics have called a show trial – began using the Euro tournament as a tool to highlight her case. The President was unmoved, even as a long list of European leaders announced they would boycott the games played in Ukraine to protest treatment of Ms. Tymoshenko.

The leaders of Germany and France (both countries play their first-round games in Ukraine) announced non-attendance, along with European Commission president José Manuel Barroso. Most recently, Prince William and Prince Harry, both sports enthusiasts, said they would not attend any of England's three games in Ukraine. As if the unofficial boycott wasn't enough, just before Euro 2012 opened, the BBC aired a searing documentary highlighting racist and neo-Nazi chanting at soccer stadiums in Ukraine.

By late afternoon, the fan march to the stadium is under way. The Swedes make the most noise. The locals try, but authentic enthusiasm is lacking. Not so much chanting as occasional barks of "Ukraine!" A self-consciousness pervades the scene.

There is a massive police and army presence. It's intimidating and meant to be. Exactly why isn't clear. A few thousand happy Swedes and locals lucky to have tickets to the game seem unlikely to cause trouble. The Tymoshenko supporters group seems small and timid. The emphatic security presence looks like a government boast, a menacing so-what to the world that found fault with Ukraine before the soccer even started.

Mark Rachkevych, a staff writer for the English-language Kyiv Post, said the locals are informed about the international fuss about hotel prices, racism and Ms. Tymoshenko. But they too have a so-what attitude.

"Judging from our anecdotal vox populis, Kyivans are aware, but they also know this will have no affect on them or the games," he said. "To them big politics is above and beyond them. Some wonder why the games must be politicized. Others realize that Yanukovych and company haven't really accomplished anything of significance, socially or economically, so they know Yanukovych is banking on the success of the tournament and the infrastructure projects that were done. People realize that the European leaders don't want to be used as propaganda tools by the President."

And then there's the game. Mr. Yanukovych is there but not the forlorn figure that some expected him to be. Michel Platini is beside him in the official box overlooking the field, with ambassadors from countries who have no issue with Ukraine.

There are no racist chants at the game, which has a dreamlike quality to it, especially since the colours of both countries are yellow and blue. It also becomes clear that Ukraine feels that thumping disco music adds to an international soccer game and that the mascots for Euro 2012, hideous rubberized figures, should be celebrated like star players.

Ukraine wins 2-1 and deserves to. Andriy Shevchenko, the 35-year-old veteran, Ukraine's greatest player and a national icon, scores both goals. That's when the real fervour starts in Kiev, the mass singing and partying.

It's all about Ukraine now and it always was. Not so much about welcoming the rest of Europe and being inclusive and celebratory about soccer. Ukraine knows it is unloved and doesn't care. All the issues, the price gouging, the racist chants heard in some local stadiums, even Yulia Tymoshenko's imprisonment, have no significance. Ukraine has won in every possible way. 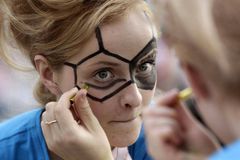 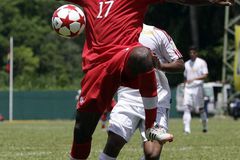