To stem the flow of refugees and migrants entering Europe, the region is turning to a controversial but potentially effective tool: paying other countries to tackle the problem.

The focus of the current efforts is Turkey, the jumping-off point for more than 500,000 people who have crossed the Mediterranean and landed in Greece this year.

In a sign of the urgency of the situation, German Chancellor Angela Merkel travelled to Istanbul this past weekend for talks with President Recep Tayyip Erdogan. She promised to speed up Turkey's membership in the European Union and ease visa requirements for Turkish citizens, incentives that were unthinkable until just weeks ago. The EU has also offered Turkey €3-billion ($4.4-billion) in aid. In exchange, the EU wants Turkey to control the wave of refugees departing from its shores and make it easier for refugees staying in Turkey to work.

The negotiations come at a sensitive time for both leaders. Mr. Erdogan is in the final weeks of a bitter election campaign that is unfolding against a backdrop of heightened instability in Turkey. Meanwhile, Ms. Merkel is under increasing pressure at home to show that she has a concrete plan for how to reduce the number of refugees entering Germany.

Ms. Merkel "sees that Turkey is the key to managing the migrants coming in," said Astrid Ziebarth, a migration expert at the German Marshall Fund of the United States, a think tank in Berlin. "She urgently needs to do something."

Establishing a partnership with Turkey on migration will be no easy feat. Some EU member states have expressed concerns about the sweeteners already offered to Mr. Erdogan. And Turkey has considerable doubts that the EU will fulfill its promises.

On Monday, Turkish Prime Minister Ahmet Davutoglu said the funds offered by the EU are insufficient. What's more, he added, "no one should expect Turkey to turn into a concentration camp where all of the refugees are kept."

Partnerships with countries outside the European Union on issues of migration have a long and checkered history. Bilateral agreements to control flows of people toward Europe have delivered results, experts say, but with serious ramifications for human rights.

One such example: Italy's co-ordination with former Libyan leader Moammar Gadhafi, based on an agreement forged in 2008. The co-operation between the two countries prompted a United Nations official to criticize human-rights abuses against migrants in Libya and warn that European countries were "externalizing" control of their borders.

Spain is another country that has deepened its co-ordination with several African countries on migration. Back in 2006, it began a hands-on effort to stem migrants leaving Mauritania for the Canary Islands. According to a recent report by El Pais, the Spanish newspaper, the co-operation took the form of financial assistance, tough prison sentences for smugglers and a joint police task force still operating in the country to this day.

Spain and Morocco have also worked together to choke the flow of people heading toward Ceuta and Melilla, Spanish enclaves in North Africa. The co-operation has succeeded in stopping the movement of people – less than 3,000 people have crossed into Spanish territory from Morocco this year – but such deterrence comes with a price. Last year, 15 people died trying to swim to Ceuta; Spanish police fired rubber bullets toward the swimmers.

In 2013, Morocco became the first Mediterranean nation to sign a "mobility partnership" agreement with the EU. The agreement envisions enhancing legal migration to Europe in exchange for better control of illegal migration from Morocco. Last year, the Euro-Mediterranean Human Rights Network said that the EU's desire to control migration exacerbates "violent practices which have been used by Moroccan authorities in their so-called 'hunt for foreigners.'"

The EU has also focused on so-called "readmission" agreements. Such deals are a promise by a third country to take back people who do not have the right to stay in the EU. The EU currently has such an agreement with Turkey, but it wants to speed up its implementation as part of the current negotiations.

Experts warn that it may not be possible for Turkey to control the flow of refugees and migrants. "It's not easy to manage the border," said Elizabeth Collett, director of the Migration Policy Institute Europe in Brussels. "It's not clear how far Turkey can do this, and how far the EU wants them to in terms of how repressive the means."

Meanwhile, she noted, the current negotiations are taking place within the context of a broader discussion about how to strengthen Turkey's own democratic institutions and processes.

"There is a temptation to downplay those [issues] because the EU really needs something from Turkey," she said. "The question is: How do we maintain our values but also be pragmatic? I don't think anybody has an answer."

Thousands of migrants surge into Croatia after days of waiting in the rain
October 19, 2015 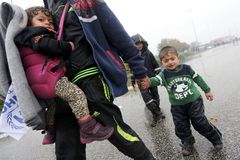