When Bernd Lucke called the first meeting of his fledgling German euroskeptic party, Alternative for Germany, he didn't expect many people to show up.

After all, Germany is the bedrock of the European Union, the defender of the euro zone and has no tradition of euroskepticism. So when 1,200 people turned out to that first AfD meeting last March in Oberursel, near Frankfurt, it rattled the country's political foundations. And the reverberations are still being felt.

Since that meeting, the party's membership has climbed to 13,000 and it has put together a list of candidates for the federal election in September. AfD is now the most talked-about party in Germany and is considered a real challenge to the governing coalition headed by Chancellor Angela Merkel of the Christian Democratic Union, or CDU.

Mr. Lucke's message of scrapping the euro, reforming the EU and changing German immigration policy is resonating with a growing number of Germans who are angry at the cost of the euro-zone bailouts and fed up with the old parties.

It's a potent rallying cry in a time of economic uncertainty. In Britain, the United Kingdom Independence Party, or UKip, long a fringe player, is surging in opinion polls with a similar platform of reforming immigration and pulling Britain out of the EU. In Italy the Five Star movement also proved how an anti-establishment party can upend the system.

Mr. Lucke follows suit, talking bluntly and taking direct aim directly at Ms. Merkel and her insistence that keeping the euro is in Germany's best interests.

"The euro has actually failed in Europe," he said in an interview Saturday during a break at a party convention in Kassel, a central German city. It has held back countries like Greece, he explained, which have no control over their currency and can't devalue it to boost exports. Germans are also angry "that all the taxpayer money is going to Greece and to Portugal and to Spain and possibly to Italy and perhaps one day to France without any kind of well-defined rules. I would be happy to give away money if the country is poor. ... But just the fact that they have spent their money without even thinking about how to repay that debt, this is not a sensible criteria for supporting them financially."

Then he added with a smile: "They don't really like us. I mean we feed them, then they bite us. That's unfair."

Mr. Lucke, 50, differs in many ways from his high-profile counterparts, Nigel Farage of UKip and Five Star's Beppe Grillo. While they are colourful characters with an irreverent style, Mr. Lucke is an economist who still teaches macroeconomics at the University of Hamburg (he has also taught in the United States, France and at the University of British Columbia).

His academic credentials, and the fact that AfD was founded with a group of economists, has opened the party to charges of elitism. Mr. Lucke doesn't dispel the notion when he said during the interview that Germans feel the country is off track but they don't "have enough economic competence to say why." He also talks about reforming immigration by assessing migrants on their job skills and said he would restrict family reunification rules that allow immigrants, particularly those from Turkey, to bring in relatives who lack job skills.

Mr. Lucke dismissed suggestions of elitism, noting that AfD's members come from all backgrounds. And none of that professorial tone was evident Saturday when Mr. Lucke addressed about 300 party faithful. He spoke for 20 minutes without notes, mocking his critics and driving home his point that despite billions of dollars in payments from Germany, unemployment is soaring in Greece, Cyprus and elsewhere. The crowd, made up largely of middle-aged men, gave him a standing ovation.

Many AfD members like Otto von Hiller have come over from the CDU in disgust over the bailouts. "I'm fed up with the CDU," he said. "They don't represent the people any more."

Andreas Kaschuge echoed those sentiments. People in his community near Heidelberg are tired of the CDU and other mainstream parties. "They really don't trust them anymore," said Mr. Kaschuge , a 23-year old business student. "And they are looking forward to the chance to vote for an alternative."

Despite its growing support, the AfD is clearly suffering growing pains. The meeting Saturday was interrupted by a group of dissenters who said they had been shut out of the planning process. The dispute was resolved but similar arguments have broken at other party gatherings, illustrating the AfD's organizational challenges heading into a national election campaign.

As its popularity grows, AfD is beginning to face more scrutiny. Germany's finance minister has called Mr. Lucke's proposal to phase out the euro "insane." Other CDU politicians have said AfD's policies represent a "danger to German prosperity and jobs." There are also concerns about the party attracting far-right extremists. Mr. Lucke played down the extremist fears, saying his party is not nationalist and supports skilled immigration. Party members are checked before being allowed to join, he said. He has also distanced AfD from other European euroskeptic parties including UKip, saying most are too nationalistic.

As for the attacks by the CDU, Mr. Lucke viewed it as a sign the AfD is having an impact. For weeks, the CDU ignored the party, but not anymore. "They are attacking us and they are very worried," he said.

The CDU has cause to be concerned about AfD. While the upstart is drawing 4 to 8 per cent support in public opinion polls, under Germany's electoral system it only needs 5 per cent of the vote in a general election to win seats in the federal parliament, the Bundestag. And with the CDU's coalition partner the Free Democrats falling as low as 4 per cent in some polls, the AfD could have an impact with only marginal success.

A state election in January in Lower Saxony illustrated the CDU's problem. The AfD had yet to be created and Mr. Lucke and his colleagues backed a party called Free Voters, which won 1.1 per cent of the vote by campaigning against the euro. That was enough to cost the coalition the government. Mr. Lucke and his group fell out with Free Voters and decided to establish AfD.

Mr. Lucke said AfD is drawing support from across party lines and from people who gave up voting long ago. He has every confidence AfD will surpass the 5 per cent threshold. 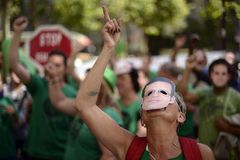 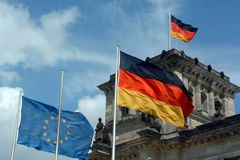