New accounts by two Spanish journalists have provided more details about the Islamic State's creation of its own version of Guantanamo, where foreign hostages endured repeated mock executions, psychological and physical torture and other abuses, leaving some emaciated like walking skeletons while another victim underwent a mental breakdown from his suffering.

The reports, which appeared in the Spanish newspapers Sunday and Monday, were written separately by Javier Espinosa and Marc Marginedas, two former hostages who were captured in September, 2013.

"The apparent intention of the hijackers was to recreate a Guantanamo for Western prisoners," Mr. Marginedas wrote in the Barcelona paper El Periodico.

Mr. Espinosa similarly said he was held in what he dubbed "El Guantanamo islamista."

Writing in El Mundo, Mr. Espinosa said the detainees were part of a systematic effort by Islamic State that came to include journalists and aid workers from 11 different countries who had been captured after they entered civil-war-torn Syria.

"They had designed the project for a long time," Mr. Espinosa said he was told by James Foley, an American freelance reporter who had been held since November, 2012, with British journalist John Cantlie.

"The Iraqi sheik himself explained from the first moment they thought of kidnapping Westerners to lock them in a high security prison, with cameras, numerous guards … They told us we were going to held for a long time because we were the first prisoners captured."

After enduring a mock execution at the hands of the militant known as Jihadi John, Mr. Espinosa said "that encounter confirmed the psychopathic character of my interlocutors."

Despite the brutality, some the prisoners held on to their wit and humanity, the accounts said.

Mr. Foley and Cantlie tried twice to escape. On one occasion, Mr. Foley could have run away but let himself be recaptured when he saw that Mr. Cantlie couldn't make it, Mr. Espinosa said, recalling that Mr. Foley said "I could not just leave John."

Because he endured the torture with stoicism, Mr. Foley was singled out by his guards, who beat him and waterboarded him for weeks, Mr, Espinosa said.

Mr. Marginedas said their guards came at night to force them to memorize phrases from the Koran.

"Learning Islam with these people is like learning Christianity with the Ku Klux Klan," one hostage later quipped, Mr. Marginedas recalled.

Mr. Marginedas said he and 18 other western prisoners were put together in a mansion near the Turkish border. They were the responsibility of a group of Muslims of British origin they dubbed the Beatles.

The prisoners had to wear orange jumpsuits and had to memorize in Arabic a number written on their back.

"From that moment we are not called by name, but by our identification number," Mr. Marginedas said.

"You, Spaniard, what's your name?" a guard would ask.

The guard corrected him. He had to say "Sir."

After being brought to the mansion, Mr. Espinosa said he was reunited with other foreigners. Among them he recognized Didier François, a French reporter. "His story was horrifying. They spoke of systematic torture, deprivation and hunger."

Mr. François told him he had been tied to a radiator without food or water for four days until he was delirious and started screaming.

The two men worked for Acted, a French aid agency delivering water, food and tents to refugee camps near the Turkish-Syrian border.

Mr. Motka was beaten merely for having a tattoo of a Buddhist symbol, Mr. Espinosa said.

He said Mr. Haines, who once had been an aircraft engineer for the Royal Air Force, had been subjected to such beatings that he suffered from constant diarrhea and vomiting.

Mr. Marginedas wrote that, for their amusement, their guards forced the hostages to stand facing their cell wall and sing a version of Hotel California, the 1977 hit song by the Eagles. The lyrics had been modified to say: "Welcome to Osama's lovely hotel; / Such a lovely place, / Such a lovely place. / Welcome to Osama's lovely hotel; / but you could never leave, / and if you try / you will die ...."

Mr. Espinosa recalled more sinister moments when he was targeted by Jihadi John, who has been identified by the Washington Post as a Kuwait-born former Londoner named Mohammed Emwazi.

Barefoot, shaven-headed and with his beard grown out, Mr. Espinosa had to sit on the ground while Jihadi John pressed a sword to his neck.

"It is cold, right?" the militant asked as he talked in details about how much pain Mr. Espinosa would feel when the blade would cut him, how he would bleed and squirm "like pigs."

Jihadi John then pressed a pistol against Mr. Espinosa's head and pulled the trigger three times.

Jihadi John then told another guard to point a Kalashnikov rifle at another hostage, the Spanish photographer Ricardo Garcia Vilanova.

"You prefer me to shoot your friend? Want to be responsible for his death?" he shouted at Mr. Espinosa.

On another occasion, a guard forced Mr. Espinosa to look at a photo of the remains of Sergei Gorbunov, a Russian engineer who was kidnapped in October, 2013, and held until he was shot in the head in March, 2014.

Mr. Gorbunov, who had several broken teeth and fingers, had been tortured so much that he lapsed between moments of lucidity and periods where he hid under a blanket and laughed non-stop, Mr. Espinosa said.

Mr. Foley and Mr. Haines, whose countries have policies against paying ransoms, were beheaded.

Mr. Cantlie remains in captivity, his fate uncertain after he appeared in a series of Islamic State videos. 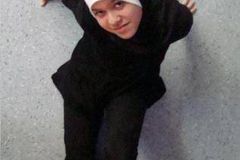