From the time Kim Hyon Hui planted the bomb on Korean Airline flight 858 until two days later upon capture, Ms. Kim didn't know whether the mission had been successful. It was the authorities who arrested her who told her that all 115 passengers on the passenger plane had died in the attack.

The former North Korean spy revealed new details on the 1987 KAL bombing in an interview with Australia's ABC News, shedding light on the regime's elite spy training system and describing how, at the age of 19, she was recruited to become one of the state's top female spies.

"One day, a black Sedan showed up at my school. They were from the central Party and told me I'd been chosen," Ms. Kim said in the interview. "I wasn't even allowed to say goodbye to my friends. I was just told to pack. I was given one last night with my family."

She had been chosen not only because of her intelligence and good looks, but also because of her fluency in Japanese, she wrote in her memoir Tears of My Soul. She was then sent to North Korea's elite spy training school in the mountains, given a new name, and trained to "kill with everything from her hands and feet to grenades and assault rifles."

"In North Korea, I was taught that our leader Kim Il-Sung was a God," Ms. Kim, who now lives said in an undisclosed location surrounded by bodyguards, said. "You were taught to put him before your own parents."

The mission, which she was assigned to at the age of 25, was personally ordered by Kim Jong-il, Ms. Kim said, and an effort to discourage visitors from attending the 1988 Seoul Olympics.

She said that she and an older male partner flew from Pyongyang to Moscow, then travelled to Budapest to obtain Japanese passports. There, the two posed as father and daughter before finally travelling to Baghdad, where they boarded the South Korean flight. According to Ms. Kim, she planted the device in an overhead compartment during a stopover in Abu Dhabi, and then left the aircraft.

"As an agent in North Korea, I was in no position to argue if a mission was right or wrong," she said. "I was trained to carry out the mission even if it cost peoples' lives."

Ms. Kim and her partner were arrested in Bahrain two days after the attack, and told that there had been no survivors.

During interrogation, she said, both she and her partner bit down on cyanide tablets they had hidden inside of cigarettes. "As I did, I remembered my mother in North Korea, then I blacked out."

Her partner died, but she was later revived.

Although Ms. Kim was initially given the death sentence, she was later pardoned by the South Korean government, who decided she had been brainwashed into participating in the attack.

"I deserved the death penalty for what I did, but I believe my life was spared because I was the only witness to this terror perpetrated by North Korea," she said. "As the only witness, it is my destiny to testify about the truth."

Ms. Kim's interview aired amidst heightened tension in the region, with North Korea threatening an imminent missile launch against the south.

"Kim Jong-un is too young and too inexperienced. He's struggling to gain complete control over the military and to win their loyalty," she said in regards to the missile threats. "He's using the nuclear program to bargain for aid to keep the public behind him." 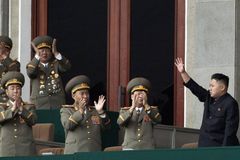 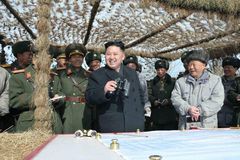