At 63 metres high, the inverted crimson pyramid hangs over Shanghai's waterfront, dwarfing the 200 other newly built structures around it. Designed to resemble an ancient crown, the China Pavilion in the centre of the sprawling Expo 2010 grounds along the Huangpu River is very much the powerful host surrounded by rings of anxious-to-please guests.

The opening of Expo 2010 following the spectacular fireworks display that rivalled the stunning opening ceremonies of the Beijing Olympics two years ago, represents the fulfilment of a century-old Chinese ambition to hold the World's Fair in Shanghai. The near-full attendance at the six-month-long event - 189 of the world's 196 countries are to take part - reflects how the Middle Kingdom has moved from the ranks of the world's envious to the envied.

If the Beijing Olympics marked the moment China asserted itself as a global power after decades of isolation, the Shanghai Expo represents the world's acknowledgment of that new status, with developing countries in particular fighting an undeclared battle to show which among them is friendliest with this emerging superpower.

"It's a coming-of-age party," said Mark Rowswell, the Ottawa-born television host who is a massive celebrity in China and Canada's commissioner-general to Expo 2010. "The Olympics was a chance for China to put on a show for the world. The Expo is the flipside of that - the world trying to put on a show for China."

Indeed, some 95 per cent of the 100 million people who are expected to pass through Expo's turnstiles over the coming six months are expected to be Chinese. In true Chinese style, it will be the largest and most expensive World's Fair in the 149-year history of the event.

Just as Beijing did two years ago, this city of 20 million people has transformed itself for Expo. Some $59-billion was reportedly spent on the 5.3-square-kilometre site that spans both sides of the Huangpu , as well as new subway lines, a new airport terminal and an overhaul of the city's signature Bund riverfront stroll.

Since Queen Victoria summoned the world to Hyde Park for first World's Fair in 1851, Expos have repeatedly been used to herald the arrival of new forces on the international stage. The Eiffel Tower was built in Paris for the 1889 World's Fair, and a trio of early 20th century exhibitions in the United States showcased the speed with which the U.S. was overtaking the conflict-ridden powers of Europe.

Recalling that history, China's ruling Communist Party clearly views the event as a declaration that this is China's moment. "Countries around the world insist on attending the Shanghai Expo because their attendance will boost the world economy, just as the 1933 Chicago World Expo did when the United States was mired in the worst economic crisis in its history," read an editorial on the state-run Xinhua news wire this week, noting that the U.S. went on to lead a "century of progress."

"The Crown of the East" - China's $220-million architectural statement - is followed on the lavish list at Expo by the $164-million Saudi Arabian pavilion, which is shaped like a giant oil barge and includes imported date palms, a mosque and a soccer-field-sized video screen to display photographs and footage of King Abdullah meeting with Chinese President Hu Jintao. The homage reflects the tightening relations between the world's biggest oil exporter and its fastest growing market.

"This is a symbol of how the China-Saudi relationship has advanced over the past few years … China for the past few years has emerged as an open and welcome country. I think the future is very brilliant," said Mohammed al-Ghandi, executive director of the Saudi pavilion.

The pavilion will stage the unveiling of new business deals between China and Saudi Arabia, he said, including the announcement Sunday that a Chinese firm has been contracted to build a new railway connecting the holy cities of Mecca and Medina.

The theme of Expo 2010 is urbanization - the ubiquitous motto is "better city, better life" - though as with past world fairs, most national pavilions are dedicated to showing off that country's cultural and technological achievements.

The French pavilion will feature works from the Musée d'Orsay in Paris and will host "mass weddings." Poland's will have daily Chopin recitals, while Japan will go one better by having robots play the violin. Even Taiwan is here, with a pavilion highlighted by liquid electronic displays and senior politicians in attendance at Friday's opening ceremony.

In an age of international acrimony, perhaps only China - with its trade-focused, non-interventionist foreign policy - could draw this many countries to a trade fair. Syria, Belarus and Zimbabwe have pavilions, returning the embrace Beijing gave them after the United States and Europe turned away for them for human-rights abuses and other reasons. In a corner of Expo sure to catch the eye of U.S. diplomats stationed in the city, the pavilions of North Korea, Iran and Lebanon sit side by side by side.

Perhaps most symbolic of Beijing's growing influence in parts of the world the West once held sway over is the joint African pavilion, which hosts 42 countries under one roof. The largest pavilion on the site, the entire tab was picked up by the Chinese government to ensure that as many countries as possible were in attendance.

"China is very important to the whole of the world, and especially to Tanzania and to Africa. China has contributed a lot, first in the decolonization process in Africa, and after they have supported us economically," said Omar Mapuri, Tanzania's ambassador to Beijing. "It's a win-win relationship for both. China is looking for [resources]in Africa, and of course we're looking for [access to]the biggest market in the world."

Critics say the international response is motivated primarily by fear that those who did not attend would suffer in terms of access to the world's largest market. "You've always had to pay the price if you want to do business here. You have to pay tribute to the Emperor," said Paul French, a Shanghai-based writer and consultant. "Governments feel, and I don't think they're wrong about this, that the Chinese would somehow penalize them, as they do whenever a Western leader has a cup of tea with the Dalai Lama."

Canada's pavilion, which has been roundly criticized for a lack of architectural creativity, may prove to be one of the bigger draws with Cirque du Soleil performers on hand, simulated bicycle rides through animated Canadian cityscapes and a restaurant serving poutine and, once it clears customs, Moosehead beer.

But the emphasis, as with all the pavilions, is on increasing economic links to the world's fastest growing economy and its 1.3 billion people. The most important rooms in the Canadian pavilion will likely be the VIP suite sponsored by Montreal's Power Corp., as well as a corporate boardroom built with money from Bombardier Inc.

"I don't think Canada is here because we're intimidated. We're here because it's such a great opportunity," Mr. Rowswell said.

Those least enamoured with China's over-the-top hosting of Expo are Shanghai residents, who have put up with their city's downtown core being turned into a construction site for much of the past eight years and who began griping months ago about the traffic snarls created by the event. Some 18,000 homes were bulldozed to clear the Expo site, angering many who said they were evicted against their will without being properly compensated.

Despite the international nature of Expo, many see the true audience as domestic. To a public angered by rampant official corruption and the widening gap between the country's rich and poor, the message is that the world recognizes how successful the Communist Party has been in guiding the country.

"To the outside world, [the government]wants to show that we're a big power. Domestically, they want to demonstrate that this is an extremely prosperous time," said Zhu Dake, a professor in the institute of cultural criticism at Shanghai's Tongji University. "This can be called the longest carnival in Chinese history."

The Universal Exposition, or Expo, has repeatedly been used as a coming-of-age party for countries looking to establish themselves on the world stage:

Britain's showcase The first World's Fair, as it was then known, was held in London in 1851. A showcase for the British Empire at its height under Queen Victoria, it marked the beginning of the Industrial Age. The Fair was attended by the likes of Charles Darwin, Charlotte Bronte and Lewis Carroll. Displays included the Jacquard loom, the Koh-I-Noor diamond and an early version of what would eventually become the fax machine.

Eiffel's debut L'Exposition universelle held in Paris in 1889 is most famous for bringing the city the Eiffel Tower, which was initially constructed as a gate to the fair ground. The exposition also featured works by Paul Gauguin and Vincent Van Gogh, as well as sharp-shooting shows by Buffalo Bill and Annie Oakley.

U.S.'s rising power A series of World's Fairs held in 1904 in St. Louis, 1915 in San Francisco and 1933 in Chicago helped mark the rise of the United States as a great power. The latter Expo featured the latest automobile designs by Cadillac and Lincoln, as well as an appearance by the German airship Graf Zeppelin.

Japan's return Expo 1970 in Osaka is seen as the moment Japan returned to the forefront of international affairs after its defeat in the Second World War.

Canada's coming of age Some also argue that Canada's most prominent period on the global stage began with Expo 1967 in Montreal, ending with the Summer Olympics in the same city nine years later. "I've been saying to people here that Canadians get Expo because we had such a large Expo in 1967," said Mark Rowswell, commissioner-general of the Canadian Pavilion in Shanghai. "It was our coming-of-age party as a serious middle power on the world stage."

Expo's demise In recent years, Expo, which is held at irregular intervals, has lost much of the significance it once held. Recent fairs, such as Expo 2005 in Aichi, Japan, and Expo 2008 in Zaragoza, Spain, have served to primarily to promote lesser-known parts of their respective countries, and received little international attention. Expo 2012 will be held in Yeosu, South Korea. 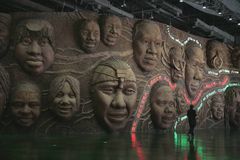