A defence lawyer for Canadian journalist Mohamed Fahmy delivered his closing statements in a Cairo court on Wednesday, hitting back against prosecution allegations that the Al Jazeera bureau chief and his colleagues were guilty of aiding terrorism and spreading false news to endanger national security. For the first time since the retrial began, Mr. Fahmy was also allowed to address the judge.

Mr. Fahmy rests his case in an 18-month ordeal that has sparked an international backlash against the Egyptian government and wreaked havoc in the lives of those accused. Whether efforts to clear his name will bring Mr. Fahmy freedom or see him thrown back into prison is now left in the hands of a judicial system that few trust.

"I'd be lying if I said I wasn't nervous," Mr. Fahmy said as he stood outside Cairo's Tora prison waiting to enter the courtroom.

Last year, Mr. Fahmy, Australian journalist Peter Greste and Egyptian producer Baher Mohamed were sentenced to seven to 10 years in jail for aiding or belonging to a terrorist organization. The journalists spent more than one year behind bars in Cairo's notorious Tora prison in a trial widely denounced as a farce. In January, Mr. Greste was deported under a presidential decree that allows foreigners accused or convicted of crimes in Egypt to be sent home. Weeks later, a judge threw out the original convictions, ordered a retrial and Mr. Fahmy and Mr. Mohamed were released on bail.

As the defendants lined up in front of Judge Hassan Farid outside a courtroom cage where they spent past sessions in the retrial locked behind soundproof glass, Mr. Fahmy's lawyer began refuting each accusation on a long list of charges levelled against the journalist.

Mr. Fahmy's lawyer, Khaled Abou Bakr, began by establishing his client as a credible journalist as he recounted Mr. Fahmy's life and career working for reputable international media, and told the judge he had only spent three months working for Al Jazeera English before his arrest.

Mr. Abou Bakr told the judge that police had broke the law when arresting Mr. Fahmy, illegally recording the arrest which was later broadcast on Egyptian television. Egyptian media, which dubbed the journalists "the Marriott cell" because they were arrested from their hotel room in Cairo, broadcast the hotel raid with sinister music from the Hollywood film Thor: the Dark World.

While Mr. Fahmy has been lashing out at his employer Al Jazeera for what he says has been grave negligence that put the journalists in harm's way, Mr. Abou Bakr's closing statement also criticized the Qatari-owned network.

Mr. Abou Bakr said there was no evidence that national security had been harmed by footage shot by the journalists, noting the court appointed technical committee ruled Mr. Fahmy and his colleagues did not edit or broadcast the footage submitted as evidence.

With Mr. Fahmy standing accused of being a member of the now-banned Muslim Brotherhood, Mr. Abou Bakr called the accusations baseless and without a shred of evidence. Additionally, he reminded the court that at the time of Mr. Fahmy's arrest, the Muslim Brotherhood had not yet been banned and labelled a terrorist organization.

Last week, the prosecution alleged Mr. Fahmy and his colleagues had depicted the events of June 30, 2013, when mass protests erupted against former president Mohamed Morsi leading the military to step in to oust the leader, as a military coup and not a people's revolution. Mr. Abu Bakr told the judge that Mr. Fahmy himself believed the events were a popular revolution, adding that he was vehemently opposed to Mr. Morsi and respects state institutions. Mr. Abou Bakr also read from Mr. Fahmy's interrogation where he praised the June 30 protests.

A lawyer representing Egypt's press syndicate also spoke on behalf of the journalists. Said About Zeid told the court journalists are not guilty of crimes they report on and explained the freedoms all journalists in Egypt are afforded according to law and the Egyptian constitution.

And for the first time in the course of the retrial, Mr. Fahmy was allowed to address the judge. "Al Jazeera lied to us," Mr. Fahmy told the judge, saying he would not let the network go unpunished.

"They destroyed my family," Mr. Fahmy added, also alleging he had received threats. When questioned outside the court, he said he had "come under heat" but declined to comment further, saying he would only focus on his exoneration.

In his closing arguments, Mr. Fahmy's lawyer once again asserted that the journalists should be separated from a group of students accused in the case.

"A very important point he made was that Peter, Baher and myself have no connection to the students, we met them for the first time in jail," Mr. Fahmy said outside the court following the trial. "The first judge refused to separate us from the students who are mainly activists, and these students have confessed in their prosecution notes that they have sold footage to Al Jazeera.

"If we take the fall and the judge does not separate the students from us, then again, the network needs to be accountable for this, not us," Mr. Fahmy said.

The judge, Mr. Fahmy said, "is really focusing on the issues of the press passes and the broadcast licenses." If convicted on charges of technical violations, the journalists could face a punishment of up to three years in prison.

Mr. Fahmy said he "made it very clear" in court that he and his colleagues believed they weren't breaking any rules. "I inquired as bureau chief and so did my team, about the legalities of our situation and we got confirmation from our network that we were legal."

There was more confusion in court when Sohaib Saad, one of the students included in Mr. Fahmy's case, was announced missing on Tuesday along with two others, including a photojournalist. After searching nearby police stations, family members of Mr. Saad expressed fear that he had been abducted by state security. In recent weeks, forced disappearances and deaths of students have been on the rise in Egypt.

In court, a lawyer for Mr. Saad told Judge Farid his client had been arrested after the judge ordered Mr. Saad to be detained if he did not appear in court, seemingly unaware of the student's disappearance.

The trial is set to resume on June 11, when defence lawyers for the remaining defendants will deliver their closing statements. 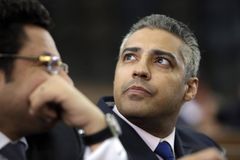 Fahmy hopes to return to Vancouver after trial
May 17, 2015 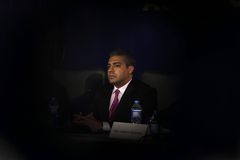