It was one shocking development after another as India's simmering feud over corruption burst into a full-scale national drama.

Police arrested an elderly campaigner with a mass following, then released him – or tried to – while streets in cities across the country filled with protesters, angry at both the pervasiveness of bribery and their government's draconian response. In Parliament, debate over the events descended into hysterical shrieking, and both houses were adjourned.

It began early Tuesday morning, when Delhi police detained a 74-year-old former freedom fighter named Anna Hazare, lately reinvented as the saintly face of the anti-corruption movement, as he was setting out to stage a fast-until-death for anti-graft legislation.

The police rounded up several thousand of his supporters, who had been converging on the park where Mr. Hazare was to hold his protest, and carted them off to a stadium in the north of the city. Thousands more protesters then began to gather outside the stadium. Street demonstrations demanding that Mr. Hazare be given his right to protest broke out in every major city in India.

Mr. Hazare was then taken from a police station to Tihar Jail on a seven-day judicial remand, and, bizarrely, locked up in the same wing that holds Andimuthu Raja, the former telecom minister. Mr. Raja is awaiting trial after being accused of costing the country as much as $40-billion through his graft-filled auction of the 2G cellular network licence. Several other senior government figures implicated in the scam are also held in Tihar.

The police shipped several of Mr. Hazare's key supporters there, too, including Kiran Bedi, a dedicated social activist who, during her career as inspector-general of prisons, instituted the reforms at Tihar Jail that made it into a top-quality prison that, as a consequence, houses all the allegedly crooked politicians.

As candlelight vigils were staged across many cities, another announcement: Mr. Hazare was being released from jail. India's hyperkinetic television news channels were soon reporting that it was Rahul Gandhi, son of Indian National Congress Party Leader Sonia Gandhi, who had ordered Mr. Hazare sprung (acting as head of the ruling party because his mother is hospitalized in New York with an ailment Congress won't specify).

Then, 10 p.m. – more breaking news: Mr. Hazare refused to leave the jail. He said he would not go until he had a promise from government that he could stage his protest under his own conditions. At press time, he was still there. By this point, Mr. Hazare's supporters seemed ready to collapse from exhaustion, while many people were recoiling from a sense that critical issues were degenerating into farce.

Mr. Hazare emerged from life as a local activist in a village in Maharashtra earlier this year, arriving unheralded to Delhi, vowing to fast until death unless the government took action against corruption. He was angry, in particular, about the 2G scam and he wanted government to pass legislation that would create the post of lokpal, or ombudsman, with the right to investigate all levels of government.

One among many fasters in the circle he chose – Mr. Hazare struck a nerve. People liked that he had once fought with Mahatma Gandhi against the British colonial regime and they liked his simple way of talking. Most of all, they liked that someone was finally overtly challenging Prime Minister Manmohan Singh on corruption, which is blatant, ubiquitous, and woven tightly into the fabric of daily life in India.

"We're sick of giving bribes just to get things done," said Basanti Devi, 54, who joined a vigil in the heart of New Delhi on Tuesday night. Her husband, son and son-in-law were among those detained at the stadium; she brought her daughters and grandchildren in from their town, two hours from Delhi, to protest. "We must bribe to get our kids into school. To get passports. To register our cars. For anything and everything. But nobody listens to our voices."

While corruption complicates business and foreign investment, it is not stifling the Indian economy, which will register at least 8 per cent growth this year. And corruption is not, by most reliable indices, worsening. But as the country gets richer, people's expectations for accountability are changing – faster, it would seem, than government's sense of them has changed.

In April, when Mr. Hazare began his first fast-unto-death, the government insisted it would not be blackmailed. But cabinet ministers repeatedly met with him and his team; they accepted almost all of the features of his bill into their own law. But when they presented that bill in Parliament a few weeks ago, Mr. Hazare's team rejected it as too weak (it exempted the prime minister and judges from the ombudsman's purview) and insisted that the government adopt their bill, or the fast would resume.

During the past weekend, as Mr. Hazare gathered his supporters, the police told him he would have to sign an undertaking limiting his fast to three days and the crowd to 5,000 people. When he refused, he was detained as a threat to law and order.

With its actions yesterday, the Congress-led coalition has eroded any hope the public will notice that it has gone to great lengths to accommodate Mr. Hazare. Now, said political analyst Seema Mustafa, even those who disliked Mr. Hazare or his methods have been turned into defenders.

"This shows the government to be frankly stupid – they've given the guy a platform and status. But if they had allowed this thing to go ahead it would probably not have been a big deal," Ms. Mustafa said. "The only thing we can deduce is that government is so isolated from the people that they have no idea the revulsion at corruption is so great."

Placards at the protests invoked the 1975 Emergency, when Prime Minister Indira Gandhi suspended the constitution and had thousands of opponents arrested. That may be overstatement, but there was much in the day's frenetic events to elicit an emotional reaction: It was just a day after Independence Day, which commemorates the non-violent struggle waged by Mr. Hazare and others against the repression of the British colonial rulers. Mr. Hazare, saintly in his white homespun kurta, evokes a memory of what feels, these days, like a lost age of morality. And once again it is a Gandhi family member presiding over a government cracking down on its critics.

"I think they thought that by arresting him this movement would slowly fade away," said Bakhshish Singh, 42, a clothing shop owner who brought his children to a vigil Tuesday night. "But they're wrong." 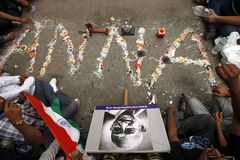 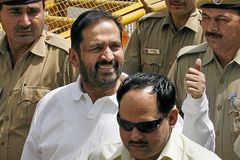